As if the fallout from the death of young Tory activist Elliott Johnson could not get any more bizarre - not to mention creepier and nastier - the source of the leaked Police report that was used by the Daily Mail’s Andrew Pierce has become all too clear at the same time as the Mail’s Sunday sister paper has revealed that so-called “Tatler Tory” Mark Clarke’s mistress fetched up incognito at last week’s pre-Inquest hearing. 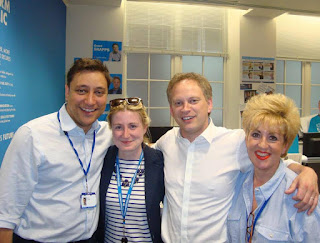 While all eyes were on the Johnson parents Alison and Ray, and the knowledge that Clarke’s henchman André Walker would turn up at Ampthill court house as part of his pretence that he was in a relationship with the dead man right up until the day he died, there was the thought that Clarke might have appeared. The idea he might be represented by mistress India Brummitt was not on most pundits’ radar.

But there she was, as the Mail On Sunday’s political editor Simon Walters has told: “The mistress of 'Tatler Tory' Mark Clarke attended the court hearing where a failed bid was made to force her lover into the witness box over claims he bullied a Conservative activist who committed suicide … India Brummitt, a former adviser to a Tory Minister, sat behind Ray and Alison Johnson, the parents of Elliott Johnson, who killed himself last year”. 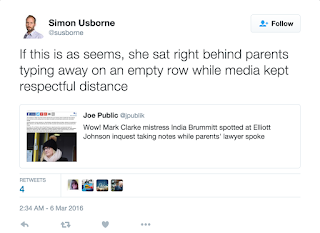 And there was more: “Mr Clarke, 38, an Election aide to David Cameron, stayed away from a pre-inquest review at Bedfordshire coroner's court in Ampthill on Tuesday. But loyal mistress Ms Brummitt, 25, was present. Dressed in a black coat with a beize [sic] shawl and furry bobble hat, and a polka dot dress, she went unnoticed by most of the media scrum that had gathered outside the court”. That much is true.

And it gets worse: realising her identity, Simon Usborne, who was also present at the hearing, has Tweeted “If this is as seems, she sat right behind parents typing away on an empty row while media kept respectful distance … I noticed her and should have asked who she was. She could have sat anywhere else. So creepy”. Whether or not Clarke put her up to it, Ms Brummitt’s actions appeared designed to intimidate the Johnsons.

That much is bad enough, but then comes the leak of the Police report into Elliott Johnson’s death. Who leaked it to Andrew Pierce? Simon Hattenstone had a very straightforward observation to make: “Police report to coroner in Elliott Johnson case was leaked 2 press. Only one other interested party at inquest: Conservative Way Forward”. Unless the cops leaked it themselves, it can only have been CWF. 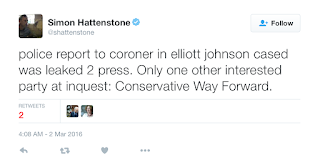 This adds up to some serious pressure on the Johnsons through the use of the most unpleasant tactics. And remember, we are supposed to believe that CWF’s former head man Donal Blaney, and André Walker, had fallen out with Clarke, so the appearance of both Walker and Ms Brummitt must therefore have been a coincidence. I don’t buy that for one moment. Something smells particularly rank about this whole business.

That makes it important that Ray and Alison Johnson hold their nerve. More later.
Posted by Tim Fenton at 11:04

Yes agreed, and the fat useless bastard actually acknowledges that banksters created the greatest financial disaster of the last century (@17:50), so it wasn't Labour after all!

Regardless, I'd be inclined to say that not only Bozo, but all of Dave's chums are unfit to take over from Dave, who was never fit in the first place.

You missed a few important things:

1. India Brummitt wasn't sat on her own - that isn't true.
2. She sat where she did because she didn't want to be hassled by the press - and indeed made her presence clear to a Mail journalist when asked and requested not to be spoken to.
3. My understanding is that she attended as, even though she has no connection to the bullying issue or Elliott's death, she has been subject to endless press intrusion about her sexual life in attempts to connect her to this.
4. Simon Hattenstone sent a second tweet after the one you quote clarifying that he wasn't suggesting any link between the leak and CWF (I am not suggesting they did or didn't leak it, only that insinuation is no proof)
5. Andre Walker didn't know India Brummitt would be attending until they arrived - there was no conspiracy.

"Whether or not Clarke put her up to it, Ms Brummitt’s actions appeared designed to intimidate the Johnsons." I really do doubt this, because it would appear that hardly anyone there had any idea who she was. If the family didn't recognise her, then how would it have intimidated them? Having attended a few inquests, I'd guess that the real reason for sitting so close was to make sure the woman could hear the witnesses clearly. For understandable reasons, Coroners' courts are generally quite hushed affairs.

I was there. I was sat in the row directly behind India Brummitt throughout proceedings. She sat alone at the far end of the right front row (within earshot of the Johnsons, as it happens). I was sat right next to the people directly behind her, and she did not speak to them or acknowledge them before, during or after the hearing.

So the first assertion by this anonymous person (at 10:41) is entirely untrue.

Quite apart from your first point having been disproved by someone who was there, the idea of Ms Brummitt, who has been subjected to press intrusion, fetching up at an event that would be crawling with press is obviously nonsensical.

Also, if the Police didn't leak the Police report, there is only one body that could have leaked it - CWF.

You do not clarify if Ms Brummitt identified herself to the Mail journalist.

But good to have a contribution from someone who is pals with both Walker and Ms Brummitt.

I guess two eyewitnesses are offering different observations of where India sat - I don't think there were very many spare seats for her to be sat 'on her own'.

To clarify - she was approached by the Mail journalist who said (more or less, not absolutely verbatim), "Hi India, I'm from the Mail. To which she replied, "I know who you are, don't talk to me."

She didn't talk to or even try and make eye contact with the Johnsons, and I doubt they even knew she was there until the press pointed it out.

It's funny how the press are excoriated for intruding into people's sexual lives by some quarters, unless it is someone who they don't like. It seems to be fair game then.

Yes, Mr/Ms Anonymous, but my eyewitness account tallies with that of a journalist and both of us are willing to put our names to it.

You, on the other hand, are contradicting our shared account anonymously, so you can't even stake a reputation* on it.

I suspect this has less to do with the general fallibility of eyewitness accounts and more to do with someone being an unreliable witness.

It's funny how the press are excoriated for intruding into people's sexual lives by some quarters, unless it is someone who they don't like. It seems to be fair game then.


The General rule is that she could sleep with the pope, have lesbian sex with the lead singer of a girl band or spank a government minister, and it would be none of our business (unless the minister was doing it on expenses) but when you're in a group that features allegations of blackmail of MPs from its members then that rule goes out of the window don't you think?