As the referendum on Britain’s membership of the EU draws nearer, so the ranting from the Out campaign gets more and more hysterical. And there is no finer repository of hysterical ranting than the Daily Express, aka the Daily UKIP, which has today adorned its front page with a storyline that was used by the Sun at the beginning of February - the one claiming that Gypsies are taking all our benefits back to Romania. 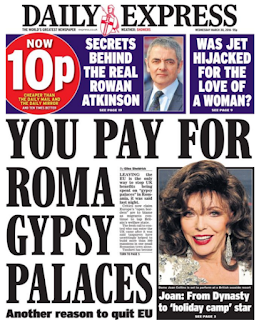 “YOU PAY FOR ROMA GYPSY PALACES” thunders the headline, making sure that readers know the subject of the rant are not merely ROMA, but GYPSY as well, and you all know what that means. Yes, racist bigotry masquerading as journalism. But do go on. “LEAVING the EU is the only way to stop UK benefits being spent on ‘gypsy palaces’ in Romania, it was said last night”. Said where? Ah yes, the Express newsroom.

Colour me cynical, because I am cynical. Notice that it was not “revealed”, but “said”. This means Giles Sheldrick can just make it up as he goes along: “it was said taxpayers have unwittingly helped to build more than 300 mansions in one small Romanian town alone”. Easy, isn’t it? There’s more. “Tandarei has become the Roma town Britain built, with many extravagant homes believed to have been bankrolled thanks to handouts claimed here”.

Said. Believed. Would the Desmond doggies care to pony up some facts? “Thousands of migrants now see Britain’s soft-touch benefits system as a way of extracting ‘free money’”. But what about a few FACTS? Try this: “Romanian gypsy Ilie Schian was jailed in 2010 after he fleeced the British taxpayer for £114,000 in benefits”. Shit, did he build those 300 houses all on his own? While he was in the slammer?

Don’t worry, they’ve found another source: “another Roma gypsy bragged he will soon pocket £60,000, which he is using to renovate his house. Ion Lazar built a palace for his wife and children with child benefits and tax credits”. This doesn’t make sense. If he already built the house, why is he saying he will “soon pocket £60k to renovate it”? And when did a detached house become a mansion and then a “palace”?

Apparently it’s all right because Ion Lazar appeared “in a recent TV documentary”. And the Express has “fear” to inject into the mix: “The amount fraudulently claimed and sent overseas is not seen as a ‘big issue’, according to officials, yet the figure is feared to run into millions of pounds”. This means the hard-pressed hacks don’t have time to find any actual figures, so they make that up too.

There is not one reliable citation in the whole article to support the claim that anyone in the town pictured has defrauded the UK benefits system. The only difference from last month’s Sun article is the name of the town - and that Sheldrick did not get one person to talk to his paper, other than Nigel “Thirsty” Farage and another UKIP MEP. Otherwise it’s wall to wall racist scaremongering. Giles Sheldrick should be ashamed of himself.

But it’s the Express, so that means it’s just another Benchmark Of Excellence!
Posted by Tim Fenton at 10:24

Some of them - Sheldrick's one - would sell their arse to pay their mortgage.

The more one sees of this kind of thing the more one realises Britain is no more immune to racism and fascism than Germany was in 1933.

And still cowards like Sheldrick fail to go after the banker crooks who almost bankrupted this country, who still run a thieves kitchen from Canary Wharf - which of course is just down the road from Sheldrick's far right propaganda bunker. No coincidence there, then.

If anyone has personal knowledge of Ţăndărei , can they assist by identifying where these "palaces" are.

They surely aren't evident on Google Earth. which is odd among a total population of just 12,000.