It’s less than a year since the General Election, when the Murdoch press was cheering the return to Downing Street of Young Dave and his jolly good chaps. But the Sun has been much less well disposed towards The Blue Team of late, with its hostile stance on the upcoming EU referendum, and now has come a Budget which Rupe’s downmarket troops don’t like one bit, as today’s paper shows all too clearly. 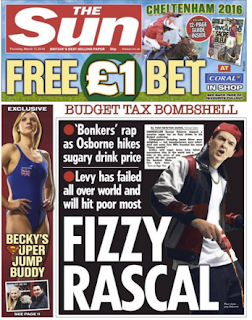 The focus of the paper’s fury has been the proposed Sugar Tax, aimed at getting folks to cut back on their consumption of sugary fizzy drinks, and motivated by lobbying from sleb chef Jamie Oliver. The headline told you what the Murdoch doggies thought of that: “Budget Tax Bombshell … ‘Bonkers’ rap as Osborne hikes sugary drink price … Levy has failed all over world and will hit poor most … FIZZY RASCAL”.

And in a rare show of unanimity, the attack was joined by the Scottish Sun, with a little tweaking to tell “Budget Tax Bombshell … Osborne sugar hit on our other national drink [Sun hacks north of the border are, it seems, yet to discover beer] … Makers ‘disappointed’ they’re being singled out … IRN BRUTE [geddit?!?!?]”. As Sir Sean nearly said, I think we got the point.

The supporting article, though, was surprisingly weak, asserting “Campaigners including Jamie Oliver were delighted - but manufacturers were infuriated and some Tory MPs branded the move ‘heavy handed’” [no Tory MP was cited, though]. It went on “Critics said sugar taxes have failed everywhere else in the world and a hike in the price of pop would hit the poorest the hardest”. No critic was cited there, either. 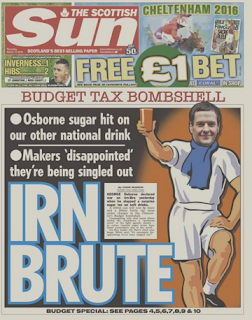 That did not deter Sun Says from a suitably thundering rant: “GEORGE Osborne’s new sugar tax is a bulk-buy multipack of full-fat cobblers. Its sole effect will be to make Sun readers’ shopping even more pricey … We are astounded that, for all the other positives in the Budget, the Chancellor surrendered to the middle-class nanny state snobs trying to bludgeon the little people into changing what they eat and drink”.

It gets worse: “Even supporters of this bone-headed and un-Conservative tax admit it will hammer the poorest hardest. Equally unfairly, it will also hit healthy people who like the occasional Coke … Yes, Britain has an obesity problem. This facile solution is not the answer. It has failed dismally elsewhere and will do so here … In Mexico it cut average daily calorie intake by a minuscule percentage”. We should now be like Mexico?

And the Sun attack highlighted one more habit the paper has adopted of late - aligning its editorial line with the perpetually thirsty Paul Staines and his rabble at the Guido Fawkes blog, who had already told of “Nanny Osborne’s Tax On The Poor” and embarked on a characteristically unsubtle attack on Jamie Oliver, accusing him of hypocrisy. I know, I know, the Fawkes folks trying to call hypocrisy on others. Hey ho.

The Sun lecturing folks about bad drinking habits is bad. Paul Staines doing the same on obesity is just having a laugh. And they wonder why they have a credibility problem.
Posted by Tim Fenton at 16:09

So sugar tax BAD but the attack on the Disabled allowances OK by The Sun ? Think public opinion would of been on the side of an editorial against the changes to disability allowances but No they are all scrounging fakers I suppose who need to get off their sick beds and if they need to grow some legs forget the cancer and Parkinson's etc and do a proper job like their journalists who can do their job whilst incapacitated through drink

"The poor" can suffer the affects of sugar and obesity because poverty and profiteering allows it?

The typical "reasoning" of drug dealers and the Scum.