At the 2012 London Mayoral Election, it was not for nothing that the Evening Standard was nicknamed the London Daily Bozza here on Zelo Street. The paper’s advocacy of the capital’s occasional Mayor Alexander Boris de Pfeffel Johnson, surely the most useless City Mayor in recent history, went beyond the slavish to being an extension of the Tories’ campaign machine. It became no more than a propaganda sheet. 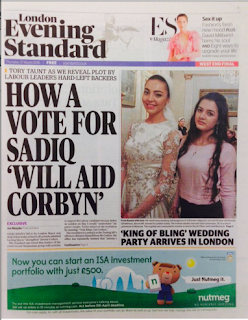 This may be not unconnected with the rumour that owner Evgeny Lebedev would very much like to secure himself a knighthood, and has persuaded himself that the best way to do this is to grovel shamelessly before Young Dave and his jolly good chaps. This means backing the Tories’ Zac Goldsmith for May’s contest, and today’s front page showed just how shameless the grovelling is going to get.

“Tory taunt as we reveal plot by Labour leader’s hard left backers … HOW A VOTE FOR SADIQ ‘WILL AID CORBYN’” thunders the headline. But there is no plot. None at all. Not even a little plotette. The entire story, under the byline of Joe Murphy, another hack who should hang his head in shame, is so full of exaggeration as to be worthless. But there is no doubt that the Tories will be rubbing their hands with glee. 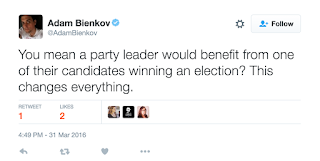 So what has happened? Simples. A meeting of the Momentum campaigning group, attended by all of 22 people, decided that, although Sadiq Khan might not have been their preferred Mayoral nominee, he was the Labour candidate, and so they were duty bound to back him. This they decided to do, proceeding to go out into the City and lend their weight to the larger Labour campaign. That is the extent of the “plot”.

And, as this was a front page lead, it must be assumed that the story, such as it is, was approved by Standard editor Sarah Sands, who like Murphy ought to have known better, but may not be in a position to do otherwise. Increasingly cynical observers of the Standard have not been slow to give the paper the slow handclap for this drivel.

Adam Bienkov, now at politics.co.uk, observed “Labour supporters in 'supporting Labour candidate' shocker … You mean a party leader would benefit from one of their candidates winning an election? This changes everything”. Dave Hill at the Guardian was equally impressed, or maybe not: “‘Hard-Left plot to back Sadiq Khan to strengthen Corbyn shock!’ Oh My God! There were 22 of them! 22, I tell you!” he mocked.

Hill also pointed out yet another example of where the Standard appears to be turning a blind eye as election day approaches, telling "Outrage as Zac Goldsmith sends ‘patronising’ leaflets to Redbridge Indian communities … Not from Evening Standard”. Goldsmith’s campaign has been roundly condemned for its dog-whistle attempts to scare voters against Sadiq Khan. But the Standard doesn’t want to know.

Evgeny Lebedev might do well to look elsewhere in the Northcliffe House bunker: the Daily Mail’s Paul Dacre still hasn’t got his K after years of backing the Tories. Just a thought.
Posted by Tim Fenton at 17:33

So the Canary Wharf Standard is "...an extension of the Tories’ campaign machine"?

Will somebody kindly nominate a part of monopoly owned mainstream media that isn't?

Heres one for the usual suspects.

Look around, everywhere you turn it's madness
It's everywhere that you go (go round)
You'll try, everything you can to escape.....the pain of life that you know..

When all else fails and you long to see something better than that arse today...

I know a way that you can get away it's called a pencil and here's what it's for so come on vote..
Let your fingers move as you use it.. Hey, hey, hey..

Let your pencil go with the flow...

All you need is your own HB station, so use it that's what it's for....
Go inside, all you find is inspiration
The vote could lock up the doors.

It makes no difference if their black or white, if you're a boy or a girl.
If the ref votes slumping it won't give you new life
Your a super star, yes, that's what you are..
You know it, come on vote..
Blah, blah, blah...
Chorus and blah....
Future's where you find it!

Alex Wickham, Harry Cole,
Put those bastards on the dole..
Along with any other Pratt
Dressed up as a white hat hack.

Ladies with an aptitude,
Fellas that were very clued.
Didn't just blag it, they all knew it
Struck the prose like nothing to it
Vote!