The Murdoch Sun is back to what it knows best this morning - demonising anyone it can categorise as “other”, while pretending that it gives a damn about the NHS, which, as all those staff going private demonstrates, it does not. The headline, “Exclusive: Health Cash Scandal … NATIONAL HANDOUT SERVICE … £181k bill for ONE illegal migrant” tells you all you need to know, including another Clause 1: Accuracy moment. 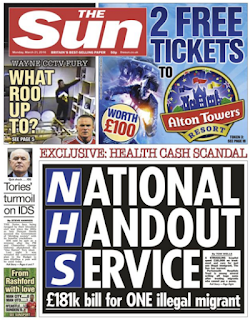 That is because nobody is getting a handout. The NHS treats the sick first and foremost: this isn’t the USA, however much billionaire propagandists like Rupert Murdoch would like it to be. Rupe, of course, plays the perpetual underdog while not mentioning that he was born into a wealthy family and has never had to do without. He is the ultimate hypocrite; his papers merely reflect that ultimate hypocrisy.

So it is no surprise at all to see the Sun once again wheeling out one Angus Dalgleish, who is presented as “an expert”, to which I call bullshit. Dalgleish is a renowned researcher in the field of cancer treatments, but he has not, in more than 30 years, worked on the NHS front line. Moreover, he stood as a Parliamentary candidate for UKIP at last year’s General Election. His views on immigration are well known.

Dalgleish has told the Sun “What is the point of making all these terrible cuts to services when you’re not chasing the money you’re owed?” No citation. Do go on. “I know of very ill individuals who’ve arrived for treatment from other countries and gone straight into intensive care costing thousands of pounds a day”. No citation. But there is also a quote from Migration Watch, who are not racists, and if you say they are, they’ll sue you.

So how much is this costing the NHS? The Sun provides evidence of less than £6 million, then claims “The cost of treating foreign nationals who failed to pay their way was just part of a £61million total written off by the NHS last year”. So around 10% of it. And what was the budget for NHS England in 2015-6? That figure was £116.4 billion. So we’re talking about just over 0.005% of NHS spending for last year.

When a Sun Says column thunders “HERE’S one way to tackle the NHS funding crisis: End health tourism … Britain is already fighting a losing battle to fund free care for our own soaring, ageing and increasingly obese population … We cannot lavish eye-watering sums on those with no right to even be here”, it is all too clear when the sums involved are put in context - the Sun hates context - they are less than significant.

That is why this story is not about saving the NHS money. It’s about whipping up hatred towards those who are most easily demonised. See, Sun readers, the reason you had to wait half an hour to see the doctor, or had to queue for A&E after getting ratarsed and falling over, was because someone who talks foreign was getting something that really belongs to you! And you’ve got to be angry about that, right?

This isn’t about the NHS. It’s about spreading good old-fashioned bigotry. End of story.
Posted by Tim Fenton at 10:08

What this demonstrates, as does the current tory "leadership" bullshit, is that it doesn't matter who "edits" or "writes" for the Scum.

The fact is any of them will do the same job of spreading lies and neocon propaganda. Choosing between them is like choosing between Hitler and Himmler - the same goes for the tory "leadership." Which is why their output will never change. They will always be the dregs of British culture, our worst and most disgusting men and women.

If they have their way we'll end up with a Yankified profiteering health system where ambulance crews search for credit cards on a prone street casualty, or families have to sell their homes to pay "healthcare" profiteer invoices.

Anybody - anybody - who works for Murdoch would qualify for the Nazi SS. Any day now we'll get a "Hurrah for the blackshirts!" headline. It's the logical conclusion to their desperation.

How much has Murdochs pro war BS cost in wars and lives?
He's making the world such a better place with his self interest in oil.
Rather ironic when we think his rag is called The Sun, which, could have been the best natural investment he could ever have chosen.
I thought he was a smart businessman to a certain extent.
Looks like he missed that boat.