Those groups that have dedicated themselves to campaign for Britain to leave the EU long ago decided that their opponents were trading on the fear of voters: only they, the optimistic and outward-looking, were promoting a positive campaign. Those soliciting a vote to remain in the EU were members of Project Fear, and the Out campaign would have nothing to do with such pessimism. Well, up to a point. 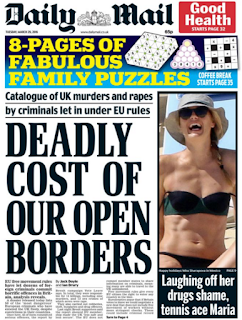 Because the Vote Leave campaign, fronted by such luminaries as Michael “Oiky” Gove, who did not betray the confidence of Privy Counsellors, honestly, has decided to frighten voters with a dossier detailing fifty criminals who they claim have committed serious crimes in the UK, having been let in because we can’t keep them out under EU rules. The claims have, to no surprise at all, made the Daily Mail’s front page lead.

The Dacre doggies do not hold back: “Catalogue of UK murders and rapes by criminals let in under EU rules … DEADLY COST OF OUR OPEN BORDERS” screams the headline. The supporting article continues “EU free movement rules have let dozens of foreign criminals commit horrific offences in Britain, analysis reveals … A dossier released today lists 50 of the 'most dangerous' European criminals who have entered the UK freely, despite convictions in their countries”. And whose dossier would that be? 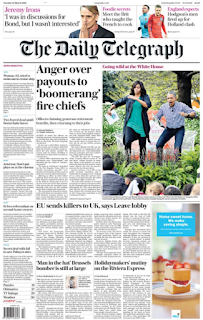 “Last night Brexit supporters said the report showed EU membership made the UK 'less safe and less secure'. The EU does not compel member states to share information on criminals, meaning many are able to travel to the UK unhindered … Free movement rules give every EU citizen the right to enter any country in the bloc”. Whose dossier was it?

Finally, in the tenth paragraph, we get the answer: “Among those on the list of 50 drawn up by Brexit campaign group Vote Leave”. So those screaming “Project Fear” at the Remain campaign are indulging in more than a little, er, Project Fear of their own. Interestingly, the Telegraph is a little less bombastic, telling “EU sends killers to UK, says Leave lobby”. 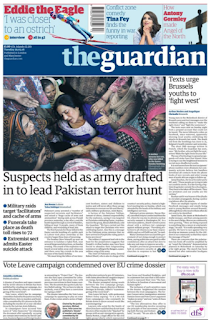 And the deeply subversive Guardian asserts “Vote Leave campaign condemned over EU crime dossier”. Scaremongering has clearly taken hold in the Out camp, and so has the inconvenient fact that the UK’s borders are not open, as anyone who has had to transit them recently will know. All passports are checked, and as Hugh Orde has pointed out, the UK has deported 7,000 criminals back to other EU member states in recent years.

It gets worse: we can deny entry to whomsoever we like, whether they come from outside the EU or not. But that depends on having good intelligence - meaning other member states need to share information with our security agencies. That would not improve if Britain left the EU. Whether the situation would get worse is one of those “you pays your money and takes your chance” moments.

But good to see the desperation of the Out campaign so well exposed by, er, themselves, actually. What you will not read in the Daily Mail.
Posted by Tim Fenton at 11:06

Vote Leave does have a point. We have plenty of home-grown criminals: Parliament, boardrooms and council chambers throughout the UK are stuffed full on them. :)

It won't be long now before we get a "Hurrah for the blackshirts!" headline.

Or maybe even a repeat of Churchill's 1938 observation that a Britain in trouble would need an Adolf Hitler.

Murdoch and Rothermere and their corrupt hacks: ur fascists all.

Shave you not seen Jatie Hopkins defending the far right in Belgium ? Maybe not as upfront as hurrah for the black shirts but pretty damn close

meanwhile, somewhere on the Costas an editor is toying with a list of 50 british criminals living it up in the sun thanks to open borders........