For a paper that has campaigned so aggressively against those who commit sexual offences against children, and for the longest prison sentences, the Super Soaraway Currant Bun seems rather too keen to give paedophiles as much publicity as they can. This was highlighted by today’s front page splash, “Footie Perv To Be Banged Up In Child Killers’ Jail … Huntley, Bellfield … and Johnson”. 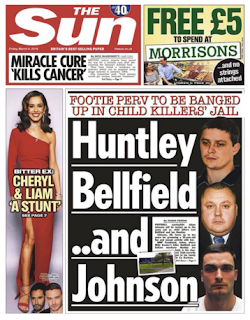 This follows the guilty verdict against former Sunderland footballer Adam Johnson earlier this week. As the Guardian reported, he was “facing the prospect of five years in jail after being found guilty of sexual activity with a 15-year-old schoolgirl”. Johnson had already pleaded guilty “to one count of grooming and one count of kissing the schoolgirl”, at which point Sunderland AFC voided his contract. He will be sentenced later this month.

It might have been thought that there would be no press interest after the trail, except to report the length of the sentence handed down. But that thought would have been misplaced, as the Sun has simply moved on from the offence to maximising its coverage of Johnson’s sentence, making the startling discovery that he will be incarcerated in a prison along with a lot of other criminals. Wow! Who knew?

But it won’t be any old prison: “Right wing to paedo wing: Adam Johnson to be banged up in same jail as Ian Huntley and Levi Bellfield … FOOTBALL paedophile Adam Johnson will be locked up in the same jail as child killers Levi Bellfield and Ian Huntley … The ex-England and Sunderland right-winger is to be held at the high-security Category A jail HMP Frankland”. What relevance do Bellfield and Huntley have to the story? None at all.

The Sun explains the all-too-obvious reason why Johnson will be sent to Frankland: “A number of its wings are designated for vulnerable prisoners to keep them safe from violent inmates … Those convicted of paedophile offences, such as 28-year-old Johnson, are kept on these wings”. And there is one other detail: Frankland “is the closest of its type to his family in Co Durham”. So why drag in Bellfield and Huntley?

Simples. They sell papers - or, rather, the Sun’s hacks believe they sell papers. So whenever the opportunity presents itself, out come the mugshots and in they go to any and every barely relevant article in order to score a few more sales. Did the Murdoch doggies ask the families of Holly Wells, Jessica Chapman and Milly Dowler whether they had any concerns before going on about Bellfield and Huntley? Did they heck.

I’ll go further: they didn’t care. The families of Bellfield and Huntley’s victims, like all the other little people who find themselves in the path of the tabloid juggernaut, just get trampled on. Selling more papers is the obsession, and if the Sun has to keep giving the likes of Levi Bellfield and Ian Huntley - as well as Rose West and Peter Sutcliffe - more glorification that they do not deserve, then the paper will do it.

It’s bad enough that they behave that way. It’s worse that they think it’s OK.
Posted by Tim Fenton at 14:18

We don't know that he won't get a suspended sentence.

Oh, I'd be very surprised if he doesn't get a custodial sentence.
I very much doubt, however, that he'll see HMP Frankland. He'll be sent to a local 'cat B' prison for a few weeks then to a 'cat C' - probably HMP Watton. I speak as someone convicted of similar offences, hence the anonymous tag. The Sun really should be aware of the truth of that, but of course the truth isn't very exciting.

Until recently the Sun was using page 3 'models' who were only a few months older than the girl in the 'paedo Johnson' case (at least, the Sun claimed they were older, but I doubt if they checked it out very thoroughly.
What does that make the editor of the Sun, the proprietor of the Sun (though he seems to like older women now) and, for that matter, any reader who didn't avert his (or her) eyes?

Johnson isn't a paedophile. He is a predatory, manipulative scumbag but does not appear to hold any attraction to pre pubescent children.

He won't be going to the maximum secure prison being proposed for journalists when the full scale of media dealings gets exposed.
Alcatraz, so I'm told!