The Super Soaraway Currant Bun is in its element this morning, as Rupe’s downmarket troops have managed to combine two of their pet hates, righteousness over the NHS and frightening the readers over Scary Muslims (tm). The resulting front page splash, “Sun Exclusive … TOP DOC AXED IN HIJAB BUST-UP … Whistleblower suspended … Scarf ‘spotted with blood’”, must have been music to Tony Gallagher’s ears. 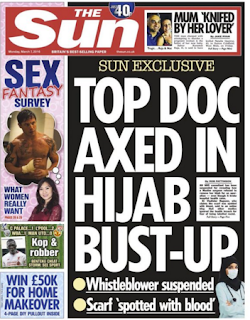 The supporting article tells “AN NHS consultant has been suspended for revealing how a Muslim surgeon refused to remove her hijab for an operation - even though it broke hospital health rules … Dr Vladislav Rogozov said in a blog that he confronted her as they scrubbed up when he realised she planned to keep the Islamic scarf on during surgery”.

There was more: “He claimed the hijab was spotted with blood from previous operations. But she refused to remove it and walked out, forcing the hospital to find a stand-in … The unnamed surgeon later accused anaesthetist Dr Rogozov, 46, of racial discrimination … She left Sheffield’s Royal Hallamshire Hospital after a hospital investigation backed Dr Rogozov for enforcing its strict dress code”. Then comes the predictable follow-up.

“But Czech-born Dr Rogozov has now been suspended for revealing the hijab bust-up in an interview with an online blog … In it, he claims other medics had been concerned about the breach of health rules but feared speaking out … He said: ‘No one dared to highlight this issue because they feared being accused of racism’”. Do go on.

“Dr Rogozov also claimed Muslim staff took unscheduled prayer breaks during surgery and alleged a male doctor had recited from the Koran during an operation”. And then we get the Sun making something up to fit. “A source said: ‘Dr Rogozov won’t tolerate anything that puts patients at risk … It has nothing to do with the medics being Muslims. It’s his fear they let their beliefs come before the patients’”.

The use of “a source”, which usually means someone in the Baby Shard bunker, set the Zelo Street alarm bells ringing. So I did a little investigation into Vladislav Rogozov, and after the application of the mystical art known as “five minutes’ Googling”, discovered that he is a self-confessed Islamophobe. But he says so in Czech, so perhaps the Murdoch doggies think they can get away with using him as an authoritative source.

Rogozov has written about Child Sexual Exploitation in Rotherham, under the heading “The rape of children - ‘Easy white meat’”, claiming that “Mosques there are growing like mushrooms after rain”. In a second post, he asserts “Violence is inspired by Islam”. He talks of “The Islamisation of Britain” and the part of Sheffield “where the Muslim population lives”. He says “Islamisation of Europe is a process that is unstoppable and probably irreversible”. And, yes, in another post he admits he has become an Islamophobe.

Given Vladislav Rogozov’s admission, one might have thought the Sun would at least get a second source to back up his claims. But that thought would clearly have been misplaced: kicking those Scary Muslims (tm) takes precedence, along with frightening the readers. After all, his blog is in Czech, and that’s foreign, innit? Busted, Murdoch clowns.
Posted by Tim Fenton at 09:41

And the relatively few people who read your work will be impressed.

The problem is more even people will have read the story without even buying the Sun as they walked into supermarkets and it will have left it's mark. That said the faked photo is so obvious a few might smell a rat.

This is silly. To suspend a doctor over a fear of any religion is insanity! Every single religion is a danger to patients, it pits the rational against the irrational. Patients do not need prayer, or doctrine; they need to separate their personal lives and relationships from the professional.

I'm lucky enough for this not to be an issue in my life, but if it did become an issue, I would not let others suffer.

As long as this man does no harm to patients, and does not openly communicate his views, or encourage others to hold them whilst at work, I think he needs to be left alone.

I Have no doubt the sun is not fighting for a cause genuinely; however that does not mean because they took this man side; I have to assume he is wrong. Your article propagates this nonsense,it is literally the opposite side of the same coin. You need to elevate the debate. Get beyond being pro or anti one thing, and move toward being open to something being wrong, right or indifferent depending upon the context.

If this man position was liaison to the Muslim community council; of course he would be acting against the interests of his job; but his job is to save lives, and the actions he took that are mentioned in the sun; and your article whilst at work, do seem to be in the best interests of the patient.

The actual incident the story refers to occured in 2013. The NHS Trust supported his report. Headscarves are not permitted in theatres for contamination reasons. He wasn't suspended for that. He has been suspended because he has now blogged about it, along with some other stuff, and people have raised concerns. There aren't more details at present because the investigation is ongoing.

So no, he hasn't been suspended for asking someone to remove their headscarf 3 years ago. If I had to guess, I'd sat it might be for some of the stuff Tim has raised above. But no-one knows at this point.

Doctor Vladislav Rogozov has NOT been suspended.
'The trust has confirmed it is investigating a complaint against Dr Rogozov that has been made by Dr Jan Culik, a senior lecturer in Czech studies at the University of Glasgow.'
'The trust has said Dr Rogozov has not been suspended and the investigation relates to concerns about the ‘tone’ he has used in a number of published articles rather than him raising concerns about the alleged headscarf incident.'
http://www.thestar.co.uk/news/sheffield-doctor-under-investigation-for-islamophobic-comments-about-muslim-colleagues-1-7778959

I imagine another reason for the complaint investigation into this less than charming doctor (the thought idly crosses my mind why isn't the Sun going after him for being an immigrant) is because he clearly broke the terms of the confidentiality agreement which the Trust had put in place back in 2013 when the woman doctor left.

The medical stuff can be safely left to the medics.

The media stuff concerns us all because this is merely the Scum latest tranche of lies and racism. It would qualify its perpetrators for Der Sturmer and the Volkischer Beobachter.

One day, someone's going to have the money to say "Fuck IPSO" and go straight to the courts to have Murdoch's boot lickers up in front of the beak, thence have them on a long stretch in the Scrubs with Sweet Pants. God knows they've got it coming.