The Super Soaraway Currant Bun is outraged today to hear that filming for the new series of BBC’s Top Gear took place not merely in London, but on Whitehall. Their outrage is so great that it’s been promoted to front page lead. “Fury At LeBlanc And BBC Crew … CLOT GEAR … Cenotaph stunt ‘disrespect’ … Osborne: Keep noise down” screamed the headline. As Sir Sean nearly said, I think we got the point. 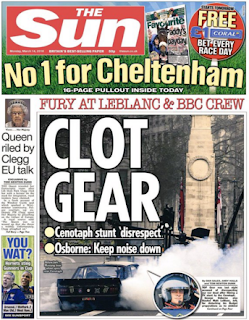 The accompanying article riffs on the paper’s disgust: “TOP Gear was last night accused of disrespecting our war dead after filming a TV stunt by the Cenotaph … George Osborne also blasted Matt LeBlanc for disturbing his Budget preparations … They were also filmed performing wheel spins near the Cenotaph war memorial on Whitehall, sparking fury from veterans”. And how many veterans would that be, Murdoch doggies?

“Col Richard Kemp, former commander of UK forces in Afghanistan, said ‘It’s worse than doing a stunt in a cemetery and screaming round people’s graves’ … Retired soldier Colonel Richard Kemp criticised the stunt … Pictures showing the car near the war memorial in Whitehall were criticised as ‘gravely disrespectful’ by retired Colonel Richard Kemp”. So that’s veteran singular. And they lifted that from the Telegraph.

And, as Jon Stewart might have said, two things here. One, whatever one’s view of the significance of the Cenotaph on Whitehall, it is a memorial and not a burial ground. It would be a push to call it hallowed ground, what with the incessant traffic thundering past it on both sides for most hours of the day and night. In any case, LeBlanc and his pal in the Mustang got no closer than 40 metres to it, as the Sun concedes.

Two, the Murdoch press has no room to call anyone out for disrespecting those who died in service of their country, as anyone who remembers the phone hacking scandal will know all too well. As the Tel told back in 2011, “The Daily Telegraph has learnt that the personal details of the families of servicemen who died on the front line have been found in the files of Glenn Mulcaire, the private detective working for the [Screws]”.

Yes, the Murdoch press knows all about disrespecting the memory of the dead - because they have devoted so much time to doing it. They are the last ones to whine about a Top Gear stunt, too - had it been Jeremy Clarkson, who is of course a Sun columnist, it would have been shrugged off as no more than a bit of harmless fun.

Instead, the Sun gets all righteous, and Chris Evans apologises on air, safe in the knowledge that he’s just scored a PR triumph and viewing figures for Top Gear will be just as good as they were for the previous régime. Over at the BBC, it’s Trebles All Round!
Posted by Tim Fenton at 10:50

And as the Scum did on the Hillsborough victims and their families.

Everybody in the city of Liverpool still waits for one of the gutless Murdoch Nazis to show up in the city to apologise. After twenty seven years.

Which makes Murdoch lickspittles talk of "our war dead" even more contemptible, since - if they could even bother to check - Liverpool suffered the highest civilian casualty rate of the World War 2 blitzkrieg (See Port in a Storm by John Hughes [1993]).

Not that truth and facts have ever got in the way of the Murdoch Nazi gobshites cowering in their bunker.

Leaving all the Sun hypocrisy aside why did the producers think that the location of the stunt, ie about 130 feet from the nation's war memorial, would be a good idea? They know the Tory press is always ready to give the BBC a good kicking yet they provide the papers with an easy target.

You say "130 feet from the nation's war memorial", I say "100 feet from Downing Street in one of London's most famous thoroughfares".

Chris Evans is, as he makes very clear in his autobiographies, a control freak who never leaves anything to chance. As chaotic as his TV and radio shows look, they're timed down to the millisecond. A shoot like this, involving multiple locations, police cordons, plenty of technical engagement, would have taken a good while to plan and execute. His "big boys nicked a car and a camera and did it while I was at a barbecue and then they ran away" excuse doesn't wash at all.

It's Shaun Ryder 'accidentally' swearing all over again.

This'll be the same 'The Sun' that never misses the opportunity to cynically point score whenever a politician not to their exacting standards dares go near the cenotaph wearing a ' Donkey Jacket' or too shallow an angle. Pfft, these disingenuous and deeply, deeply shallow clowns have a nice warm slash up against the cenotaph every November (metaphorically speaking).