The press has a problem with anyone who has money, but speaks out for the less well-off. They have a rather bigger problem when that person is not only well-known, but also popular. So it is that Rupe’s downmarket troops at the Super Soaraway Currant Bun have gone after Russell Brand, especially as he is far more successful with women than any of their hacks or pundits. 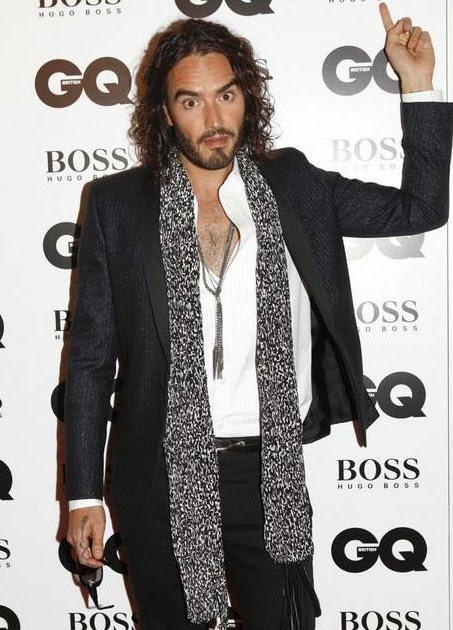 Although the Sun is secreted away behind a paywall, today’s front page and editorial are readily available, and the Mail has lifted the story behind it all (see how that works, Rupe?), so we can piece together the cause of the paper’s ire. And it has to be concluded that the paper’s editorial staff are, right now, standing in one heck of a draughty glasshouse when it comes to claims of hypocrisy.

“We brand Russell Brand [original, huh?] ... He rants against high rents and tax avoidance ... But he pays £76k a year to tax-dodge landlords ... HYPOCRITE”. As Sir Sean nearly said, I think we got the point. Sadly for the Sun, Brand’s personal circumstances do not disqualify him from speaking up for those who may be forced from their homes by less scrupulous landlords – which is what he was doing. 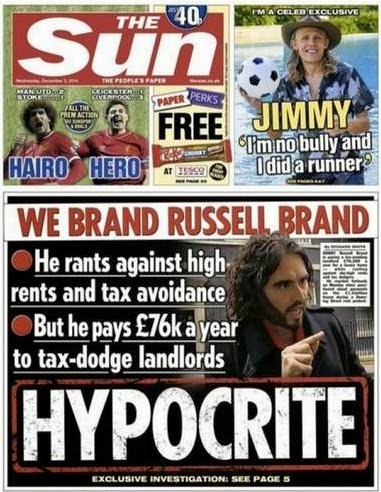 You didn’t see that in the Sun editorial? Of course not: this is, not for the first time, playing the man rather than the ball. And the Murdoch faithful go in with both feet: “incredible lack of self-awareness ... all the free time ... never results in any real thought ... swept up in a vortex of conspiracy paranoia and clichéd ... propaganda ... Out spew the theories, a mass of ... waffle”. And there’s more.

“Some of it is muddled and wrong. The rest is actual gibberish ... childlike grasp of the world and attraction to long-ago debunked conspiracy nonsense are worrying in a middle-aged man”. Brand is just 39: he’s really getting to the Sun, isn’t he? And what you see taken from today’s editorial describes rather more accurately the state of mind of those who write for the paper publishing it.

Lack of self-awareness, lack of real thought, propaganda, paranoia, waffle and conspiracy nonsense sum up the Sun’s response to any kind of criticism, and especially their take on attempts to make press self-regulation half credible. The mild-mannered and pragmatic Lord Justice Leveson became, in the Sun retelling, a bringer of state control, censorship, of freedom denied.

Now Creepy Uncle Rupe’s finest are projecting their own anguish onto Brand, a sure sign that they are frightened witless of him. Perish the thought that someone who talks about things they don’t want to hear – like society’s ingrained inequality – can cut through and bypass the press in order to get his message across. And he’s still more popular with the women than they are.

Missed out "it is a" haven't they?

All their trials lord, best forgotten?

A few weeks ago, my son happened to come across Russell Brand outside Broadcasting House. He asked Brand if he could take a photo with him and Brand happily obliged. They even had a little chat about football.

Whilst I am not enamoured by Brand's view on politics I was impressed that someone of such fame would happily take a few moments out of a busy schedule to chat with a complete stranger.

It is sad that a celebrity is victimised just for having an unconventional viewpoint I would would rather my son be in the presence of Russell Brand than any Sun journalist.

Didn't La Mensch also get in on the act when the Occupiers outside St Pauls dared to keep awake by getting their caffeine from Starbucks?

Reminds one of the relationship between certain editors whilst their newspaper headlines were decrying all those philanderers.

Sorry, getting confused between irony, hypocrisy and possibly logic too. It can't be easy reading The Sun.

I have mixed feelings here. The Sun are, as ever, hypocritical scum. But the worst thing is that there is genuinely awful stuff that Brand has done that they could have attacked him for. But the Sun and co won't, because a) they're useless journalists and b) they are much on the same level as he when it comes to treatment of women.
The man is a repeat sexual harasser: https://angrywomen.wordpress.com/2014/11/04/what-do-russell-brand-the-swp-and-the-casa-have-in-common/

and many women have since come forward to relate their stories of him being an inappropriate arsehole under the guise of progressive activism.
So, in conclusion .. I'd say this is a case of wasp landing on nettle?