It is all too well known that the legendarily foul mouthed Paul Dacre and his obedient hacks and pundits at the Daily Mail love to talk of “truth”, “proof”, and to have “revealed” supposed facts, but the reality is that truth is all too often the first casualty of the Vagina Monologue’s boiling hatred of anything that he sees as not being in accordance with the views of himself and his readers. 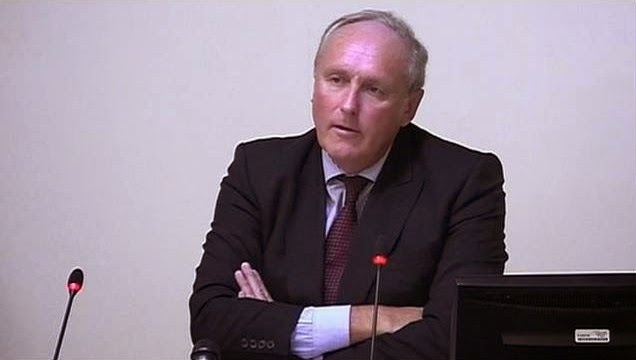 And nowhere has this been more clearly visible than this week’s Mail campaign to demonise the NHS, on the pretext that it is recruiting nurses from outside the UK in preference to home-grown talent. Readers have, in addition, been frightened by suggestions that many of those foreign nurses cannot speak English, a contention backed up, as I noted the other day, by just lying about it.

But, despite the Mail’s sums not adding up, and the assertion that 80,000 students had been told that they could not train as nurses being bogus, the Dacre doggies have been at it again today, the headline thundering “Revealed: The REAL reason so many young Britons can't get jobs as nurses ... even though last year we shipped in more than 7,000 from abroad”. 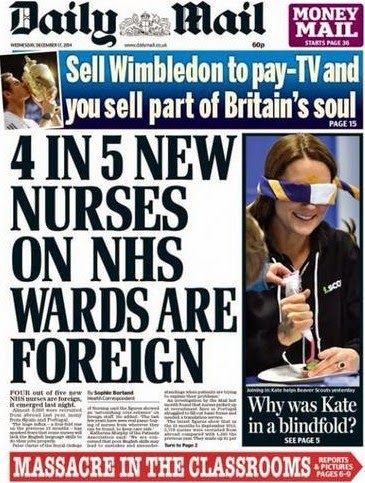 Eagle-eyed readers will note that the number of foreign nurses has increased over the past three days, and this is because midwives and health visitors have been bundled in by the Mail to make the numbers look scarier. So who dunnit? As if you need to ask: it “is because of poor forward-planning by NHS pen-pushers who chose to save their own jobs rather than those of frontline staff”.

Do we get to know who those culprits are? You jest. The risk of crossing the defamation line – the Mail has zero evidence to back that one up – is too great even for the Vagina Monologue. Instead, readers are fed airy waffle like “the inability of the NHS either to plan ahead, or to get the most from the billions of pounds of taxpayers’ money it spends each year”, also backed up by zero evidence. 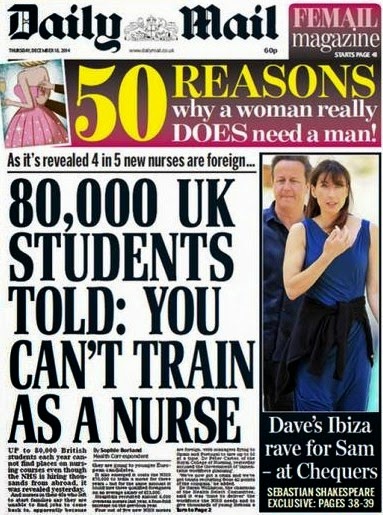 And now, the Health and Social Care Information Centre (HSCIC) has blown the whistle on the Mail’s misinformation, especially the “4 out of 5 nurses are foreign” claim, which is plain flat wrong. 4 out of 5 are in fact British. HSCIC has written to Dacre to complain: “We are writing to express our extreme concern that the Daily Mail has chosen to use inaccurate figures on its front page for two days, despite clear Health and Social Care Information Centre (HSCIC) guidance that these figures are incorrect”. And there’s more.

“Furthermore, you have resisted consistent approaches by telephone and email from the HSCIC media team, which explained the inaccuracies and requested a correction. The public have a right to know that the claim above is statistically unsound”. The truth at last. Without quotation marks. But not in the Daily Mail.
Posted by Tim Fenton at 10:58

Let's see what the so-called "independent press standards organisation" does about about this.

As ever with the Mail, never let the facts get in the way of a good headline.

@DBC - I think we all know what IPSO will do, headed as they are by one Mr P. Dacre, absolutely nothing. Even if, by some miracle, HSCIC do get anything more than a brush-off from them, the correction will be in small print on page 26 of the Mail about 2 months from now.