In July 2012, this blog considered the support given by Richard “Dirty” Desmond’s stable of titles to right-leaning parties, noting that the Daily Star had been flirting with the virulently Islamophobic English Defence League (EDL), and that the supposedly flagship Daily Express had been recycling UKIP propaganda as if it were fact. The EDL has faded since then; the Kippers have not. 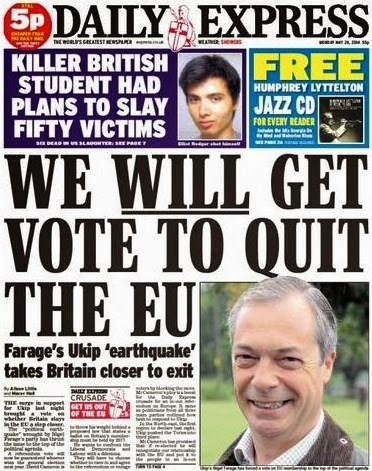 But Desmond had thus far not directed his papers to shill for any particular party, hence the Daily Star and Daily Express choosing different paths, and the Sunday Express, in the meantime, remaining loyal to Young Dave and his jolly good chaps. Now all that is about to change, as Dirty Des succumbs to the same vanity that has afflicted the legendarily foul mouthed Paul Dacre over at the Daily Mail.

The Drum noted that “Northern & Shell and Express newspapers owner Richard Desmond has reportedly expressed interest in backing Ukip at the general election. Desmond is understood to be meeting party leader Nigel Farage this week, according to the Sunday Times, amidst rumours that he has been seriously considering having [his] papers ... endorse the party officially”. 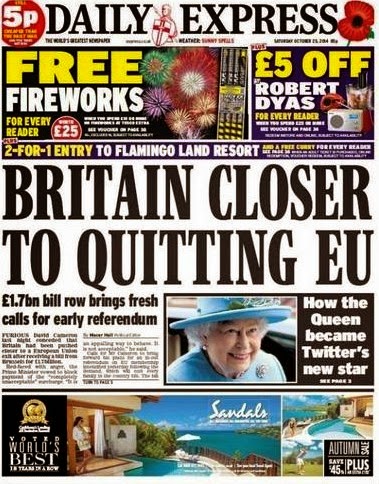 And the deeply subversive Guardian has gone further: “It is understood the meeting will be attended by Paul Ashford, group editorial director of the Daily Express, Sunday Express, Daily Star and Daily Star Sunday, as well as a number of senior editorial staff from the newspapers. It is believed that the Ukip leader, Nigel Farage, will attend the meeting, although this has not been confirmed”.

So what’s the deal? Is there some kind of Quid Pro Quo involved? As if you need to ask: “One source said that the rumour is that Desmond has been offered a peerage by Ukip – if the party wins enough support for more than one MP, they would have the right to nominate peers”. Just as Dacre has had a gong dangled before him by Cameron, Farage has appealed similarly to Des’ vanity. 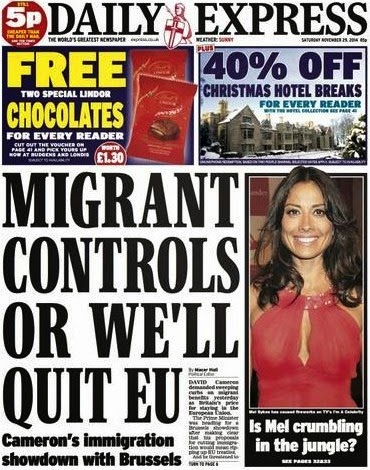 The Guardian spells it out: “‘Desmond thinks backing Ukip will be good for the papers commercially,’ said one insider. ‘The word is that Farage has offered him a peerage if it all works out, and this, even more than money and the respect of London’s Jewish community, is what he craves now’”. What a reward – for taking Max Beaverbrook’s great Express and making it a laughing stock.

What is mystifying is why Farage thinks having the Desmond titles backing him will get many more to vote UKIP, so little is their credibility. Meanwhile, savour this thought: Lord Dacre of Effingham-Blindingham fetches up at the Lords, only to find his new fellow peers include Baron Desmond of Topshelf-Downmarket, the man he so roundly – and correctly – denounced as a mere pornographer.

“Tainted New Year Honours”? “Dishonours”? They certainly will be!
Posted by Tim Fenton at 10:09

"What a reward – for taking Max Beaverbrook’s great Express and making it a laughing stock".

It's been a laughing stock for years for just having the strapline "The World's Greatest Newspaper" on its front page.

Dacre and Desmond. A pair as frothy as Double Diamond to keep pulling the woolsack over the eyes of their readers?

Mostly air with not a great deal of substance?

There's nothing wrong with being a pornographer: it's Desmond's dishonesty about it that's the real trouble. Oh, and the Express and Star generally.

How will North London's Jewish community feel about him cosying up to a singer of Nazi marching songs who hangs out with holocaust deniers?