The increasingly cheap and nasty Murdoch Sun – that is, cheap and nasty even by its own cheap and nasty standards – has maintained its reputation for barrel-scraping today with the shock horror revelation that there are wild mushrooms growing on land owned by the Crown. Next week, Rupe’s downmarket troops will be warning those with lawns that they might need trimming next summer. 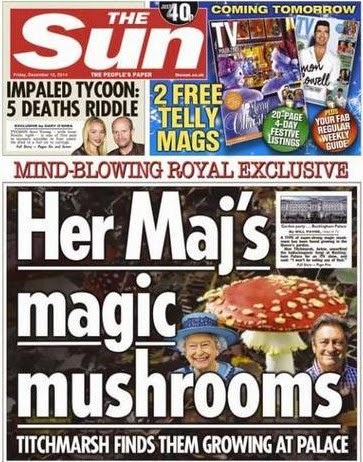 Issues of clear national importance. Or maybe not

For a paper with a reasonably decent budget, as recent revelations about the amounts it is prepared to pay for stories show, the Sun does seem to be ever more desperate to go for the cheap shock in order to pull in the readers. To this end, the paper’s roster of dubiously talented pundits now includes Rod Liddle, whom the BBC wisely allowed to leave his post as editor of Radio 4’s Today programme.

Liddle considered the case of Labour prospective Parliamentary candidate (PPC) Emily Brothers, who lost her sight as a child, and has come out as transgender. “Emily Brothers is hoping to become Labour’s first blind, transgendered MP. She’ll be standing at the next election in the constituency of Sutton and Cheam” told Rod. And then he opened mouth and inserted boot. 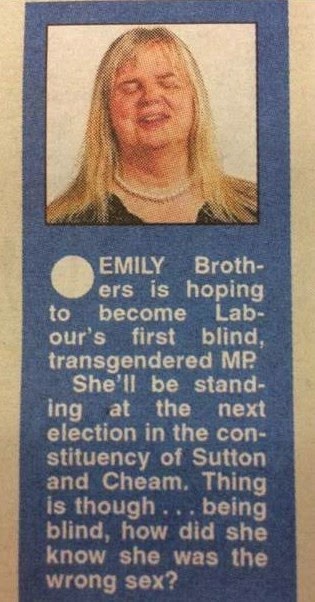 “Thing is though ... being blind, how did she know she was the wrong sex?” sniggered the clumsy contrarian. Laugh? I thought I’d never start. No doubt it sounded funny down the Rub-A-Dub after an evening on the lash, but there must be many Sun readers uneasy at this slice of bigotry. Even “I’m only telling it like it is” merchants like Tory MP Philip Davies might think twice before saying that.

Worse, Liddle also seems not to have bothered to do his homework before penning his poisonous rant. As London Live has noted, “Ms Brothers is a prominent speaker and campaigner on disability issues. She is also the former head of policy at the Equality and Human Rights Commission and a former President of the National Federation of the Blind”.

She also enjoys the unequivocal support of her party leader. When Ms Brothers came out as transgender, Mil The Younger Tweeted “So proud to have Emily Brothers as a Labour candidate. She is an important voice in our movement”. It seems that the only people who have a problem with her are in the tabloid press. But then, the tabs have previous when it comes to trans people.

The Daily Mail never lived down Richard Littlejohn’s attack on trans schoolteacher Lucy Meadows, who later took her own life. But then, the Mail doesn’t want its readers to live in the 21st Century. In the meantime, London Labour has said “We hope [The Sun] apologises for these vile comments today”. That, though, would be a big ask: sorry is not what Rod Liddle and the Sun do voluntarily.

The Sun’s attitude towards disability and trans issues in one: bang out of order.

[UPDATE 1325 hours: hang the flags out, Rod Liddle has managed to muster sufficient decency to apologise for his remarks!

Liddle has now stated that "I wish Emily the very best and I'd definitely vote for her if I lived in Sutton and Cheam. I am sorry for the poor joke!" He should have thought about that beforehand.

Meanwhile, the Sun's slippery PR Dylan Sharpe has vainly tried to spin his way out of the mire: "It's from Rod Liddle's column, where he gives his opinion. It is not the view of The Sun newspaper". Very good Dylan, and which paper would the column have been published within?

That would have been yours]
Posted by Tim Fenton at 10:30

On a side issue, the toadstool pictured prominently on the Sun's front page there is NOT a magic mushroom (which conventionally refers to psilocybin mushrooms), but rather a fly agaric which while rarely lethal is distinctively more unpleasant than the other kind. Hopefully no-one will be stupid enough to go munching any fly agaric they come across after seeing this front page...