Mail Campaign In The Bin

The Daily Mail’s legendarily foul mouthed editor Paul Dacre really believes that he has the power to bend Governments to his will, and it is this unshakeable belief that drives campaigns long after they have ceased to be worth the candle. Today has brought a prime example, given added piquancy by Dacre actually taking Eric Pickles, the circumferentially challenged Communities Secretary, at his word. 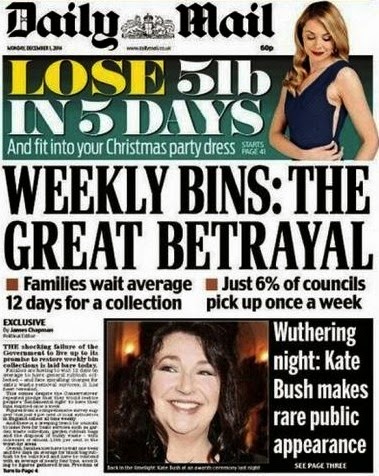 The Mail plays both sides of the Government spending field: thus it has no problem railing against higher taxes and the so-called “nanny state”, while wanting more prisons, more Police, more social workers who make the decisions it wants some time after the event, more roads, cheaper rail fares, cleaner streets, and of course bins emptied at a frequency dictated by the Vagina Monologue.

So we come to today’s Mail front page, which stands out from the crowd because this is a Dacre-driven campaign. “Weekly Bins: The Great Betrayal” thunders the headline, going on to tell “Families wait average 12 days for a collection ... just 6% of councils pick up once a week”. The paper’s political editor James Chapman has had his time wasted on this pointless rant.

And the Mail’s outrage at finding that, well, Pickles speak with forked tongue is palpable: “The shocking failure of the Government to live up to its promise to restore weekly bin collections is laid bare today. Families are having to wait 12 days on average to have general rubbish collected – and face spiralling charges for extra waste-removal services, it has been revealed”. Do go on.

“This comes despite the Conservatives’ repeated pledge that they would restore people’s ‘fundamental right’ to have their bins emptied once a week”. Did the Dacre doggies think for a moment that Pickles was anything more than all wind and piss? They know now: the Communities Secretary is branded “Minister for hot air” as the Mail realises that he isn’t really listening to them.

After pretending that It’s All Labour’s Fault (again), Chapman admits “In opposition, David Cameron and Communities Secretary Eric Pickles repeatedly pledged to restore the weekly bin round, and on winning power unveiled a £250million fund to encourage councils to do so. Today’s research, however, suggests the Government’s measures have been a crushing failure”.

Yet Dacre still believes that he can force the Government to act, quoting Pickles’s latest guff on the subject: “Conservatives ... have actively supported weekly bin collections”. That is meaningless drivel: councils have planned for separate collections, and to recycle more, and they aren’t going back. Pickles knows this; it’s sad that the Mail even now cannot grasp this reality.

Paul Dacre should have retired last year. His power over Governments is shot.
Posted by Tim Fenton at 10:18

To be honest, I never had a problem with bi-weekly collections. We have general rubbish, food, & recycling. Only the food is collected every week. the recycling are every other week. We recycle a lot and our general rubbish bin is never full, and that is for a family of 5!
It's amazing they hark back to the 'good old days' in the DM - but that is when people didn't throw as much away, and things were recycled more!

"Paul Dacre should have retired last year. His power over Governments is shot."

Is he or is he not still Going for a Gong?

Totally agree times have changed and with even more rubbish being able to be recycled the need to collect rubbish bins weekly has gone. I suspect that the large wheelie bins have been distributed not only to suit the collectors' vehicles' mechanics but to enable fewer collections in future.

Maybe Mr Dacre would like to visit sunny Leicester, where our bins are emptied once a week, thanks to the munificence of our Labour mayor, councillors and MPs?

Try doing what I do.