The Unique Selling Point (USP) of Nigel “Thirsty” Farage, so his fellow saloon bar propper-uppers at UKIP would like the electorate to think, is that he tells it like it is. It’s only what that mythical silent majority is thinking, stripped clean of all that liberal and namby-pamby political correctness. He’s a man of the people. He likes a pint, and you can relate to him. And it’s total bullshit. 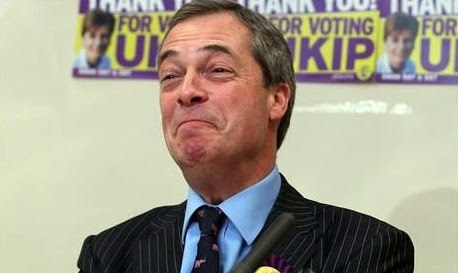 Squeaky foot in mouth finger up the bum time

Mr Thirsty and his pals have, for some time, pretended that what most people would call bigotry is a mere series of gaffes, to be excused by the least credible of excuses, which we are supposed to take on trust. That was the line taken when former PPC Kerry Smith first tried to hang on to the UKIP candidacy for South Basildon and East Thurrock, before bowing to the inevitable and quitting.

The Kippers put forward former Express hack Patrick “Lunchtime” O’Flynn to explain that Smith’s comments, including calling gay party members “disgusting old pooftahs”, and referring to a “Chinky bird”, were because he was, at the time, on sedatives. God Only Knows how much more bigoted and racist he might have been if no sedatives had been involved.

But, with Smith throwing in the towel, there it might have stayed but for Mr Thirsty fetching up on Nick Ferrari’s LBC show this morning and ending up with boot firmly in mouth as he admitted Smith was not a suitable candidate, but then claimed, guess what, that there wasn’t really anything wrong with what he had said. Because he had grown up in a council house. And then it got worse.

Ferrari challenged the idea that living in a council house made it OK to make derogatory comments. Cue Farage: “If you and your mates were going out for a Chinese, what do you say you’re going for?” to which Ferrari, to his credit, replied firmly “I honestly would not use the word ‘Chinky’. Would you?” Nige came back with “No, but a lot of people would”.

A lot of which people? But dig yourself in deeper: “I think we’re very snobbish in London about condemning people perhaps for the colloquial language they use, particularly if it’s not meant with really unpleasant intent”. It’s got bugger all to do with “being in London”, or “colloquial language”. People don’t use words like “Chinky”. It’s largely fallen out of use – whatever kind of house you live in.

But Nige wasn’t listening: “The point is this; I feel a bit sorry for Kerry Smith because he’s a genuine fella, I think even with the poofter comment ... All I am saying is UKIP is treated slightly unfairly on this. Yes, of course we have people who do things and say things that are wrong, so do the other parties as well ... We do not have a monopoly on stupidity, I promise you”. Not yet, perhaps, but give it time.

We’re not talking “rough diamonds” here. The term is “racist bigots”. End of story.
Posted by Tim Fenton at 13:04

And there's the pity, it would have been 50% correct and that's arguably a better success rate than the current lot in Government.

Has any Kipper tried to ride out one of these bouts of bigotry and prejudice by claiming it to be just 'banter'? (Which is used to justify all manner of unsavoury behaviour.)

Saying that you're going for a chinky is bad enough when talking about a meal, but Kerry Smith was talking about a person.
What next? Will nigg*r be OK, because it comes from negro and that was an academic term!

This is the man that refers to Rupert Murdoch as:'The Boss'

I'm older than Farage - in person years, anyway - and I can honestly say despite growing up in the 60s and 70s I have never referred to either a Chinese person or a Chinese takeaway as a 'chinky'. Why would I?