There is a very good reason that most actors, even though they may lend their support to popular causes, stay silent on controversial political issues. That reason has much to do with Denis Thatcher’s dictum: “Better to remain silent and be thought a fool, than to open one’s mouth and remove all doubt”. These wise words were forgotten in the small hours by one Frances Barber – very publicly on Twitter. 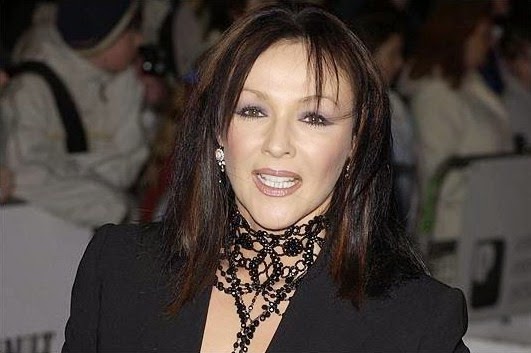 It wasn’t the first Twitter wobbler thrown by Ms Barber: she became most agitated with a fellow Tweeter during the run-up to the Scottish independence referendum. But this rant, of the kind that will satisfy the most discerning rant connoisseur, was, as far as could be told, on the subject of Islam, although Ms Barber managed not to be too specific, even after prompting. 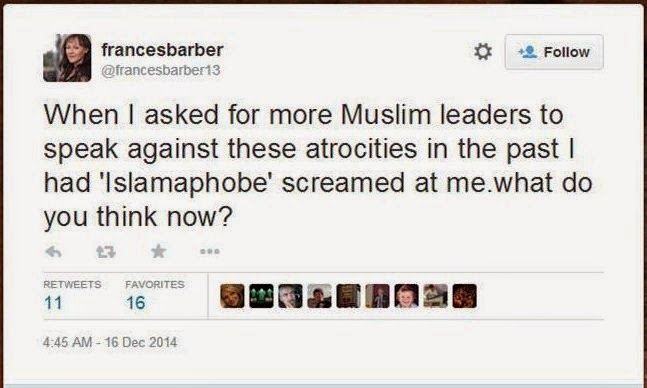 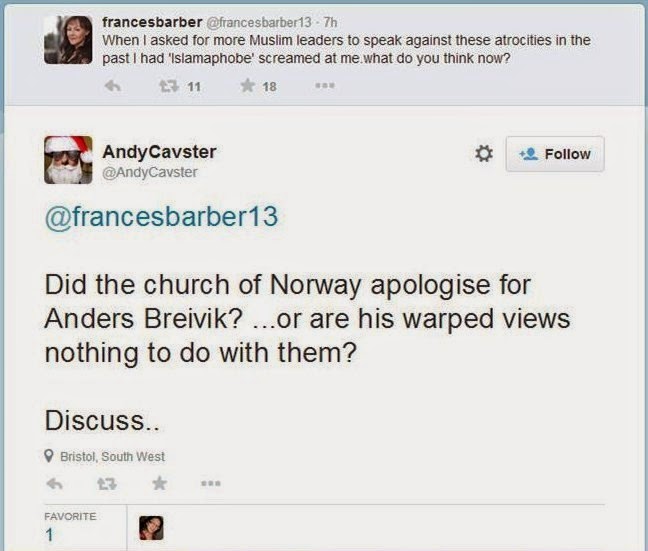 “When I asked for more Muslim leaders to speak against these atrocities in the past I had ‘Islamophobe’ screamed at me. What do you think now?” she demanded. Andy Cavster enquired “Did the Church of Norway apologise for Anders Breivik? Or are his warped views nothing to do with them?” This provoked a Twitter outrage arms race, with Ms Barber ratcheting it up gradually. 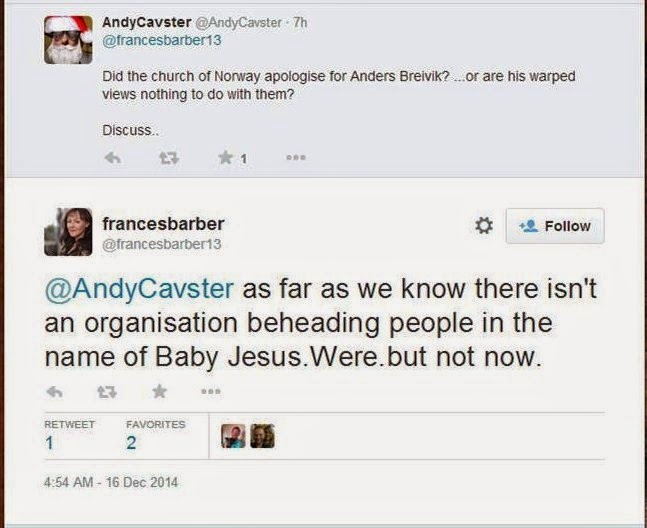 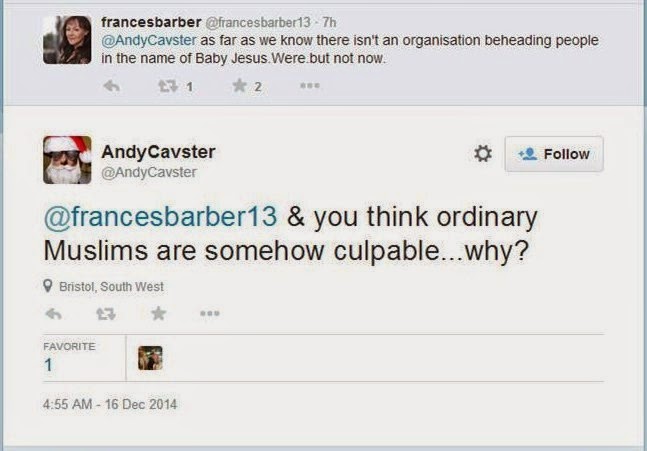 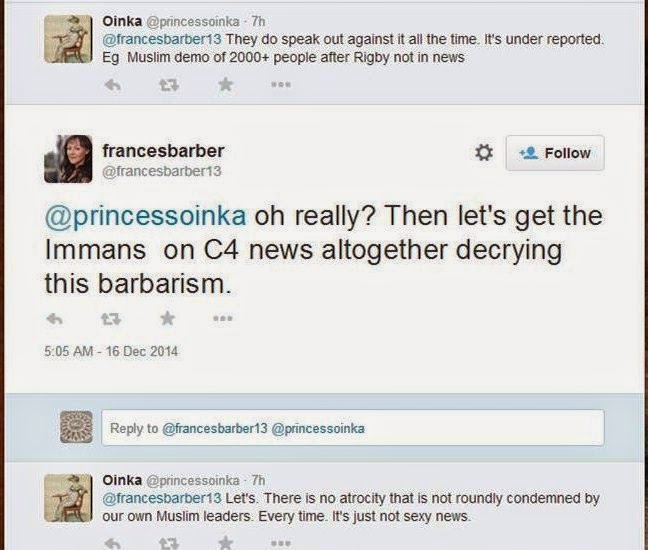 “As far as we know there isn’t an organisation beheading people in the name of Baby Jesus” she countered. Er, what? “And you think ordinary Muslims are somehow culpable ... why?” asked Andy. Still Ms Barber would not say what she was referring to: “let’s get the Immams [sic] on C4 News altogether [sic] decrying this barbarism”. 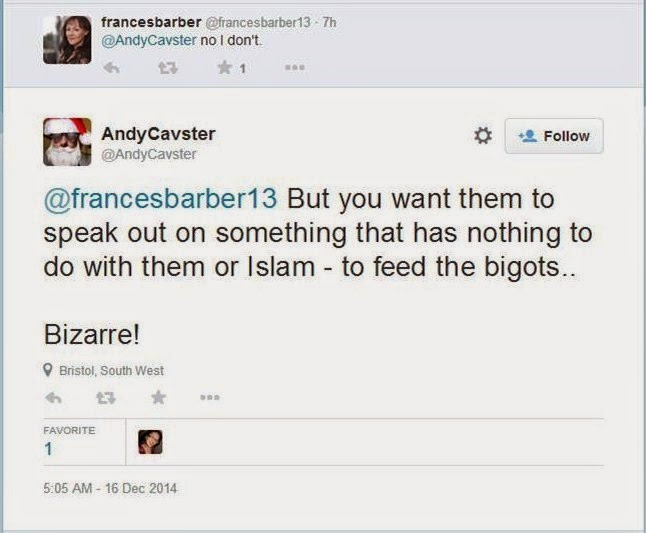 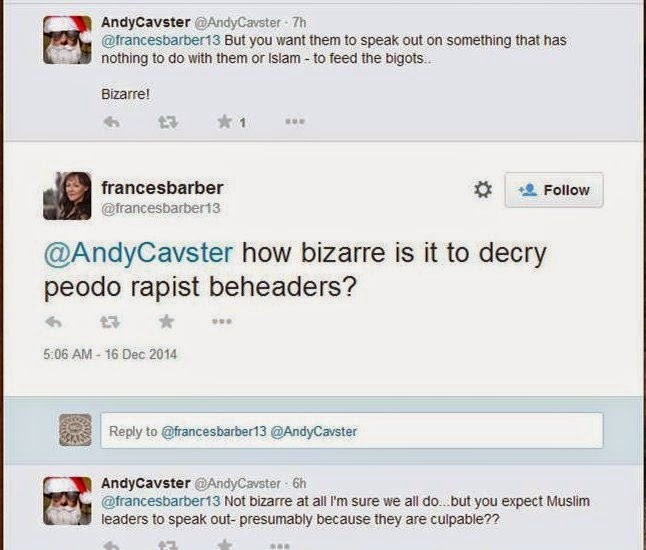 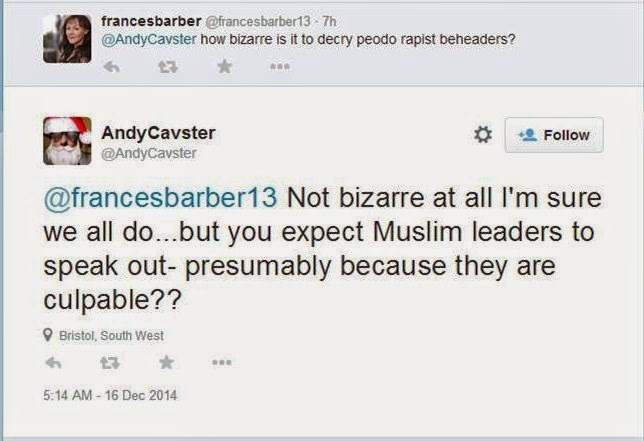 Andy had another go: “But you want them to speak out on something that has nothing to do with them or Islam – to feed the bigots”. Back to the arms race: “How bizarre is it to decry peodo [sic] rapist beheaders?” Andy asked once more: “Not bizarre at all I’m sure we all do ... but you expect Muslim leaders to speak out – presumably because they are culpable??” 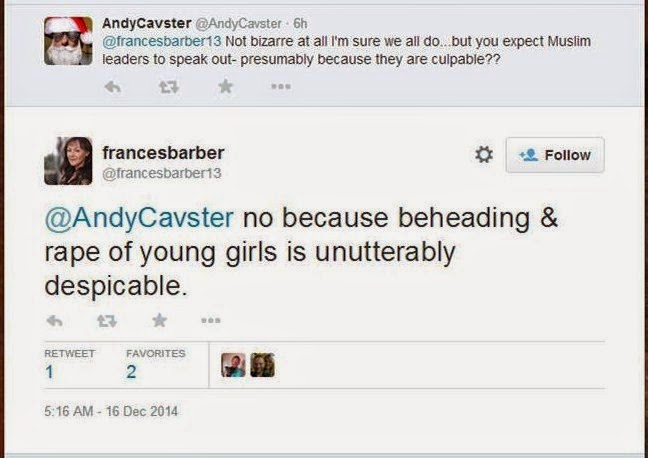 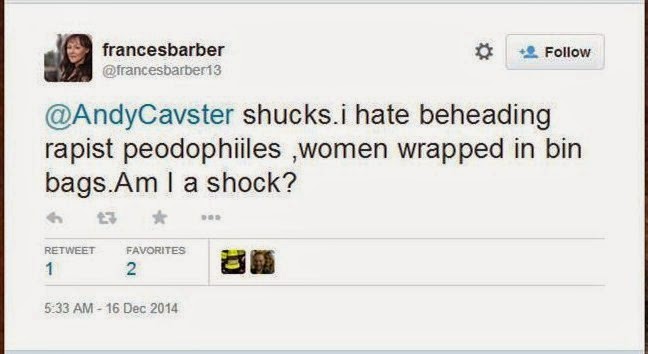 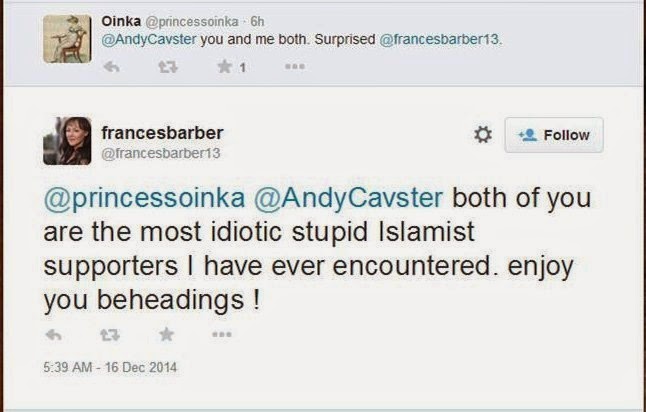 Back came Ms Barber: “no because beheading and rape of young girls is utterly despicable”. What’s she on about? Who knows? Whatever. “Shucks. I hate beheading rapist peodophiiles [sic], women wrapped in bin bags. Am I a shock?” And there was more: “both of you are the most idiotic stupid Islamist supporters I have ever encountered. Enjoy you [sic] beheadings!” 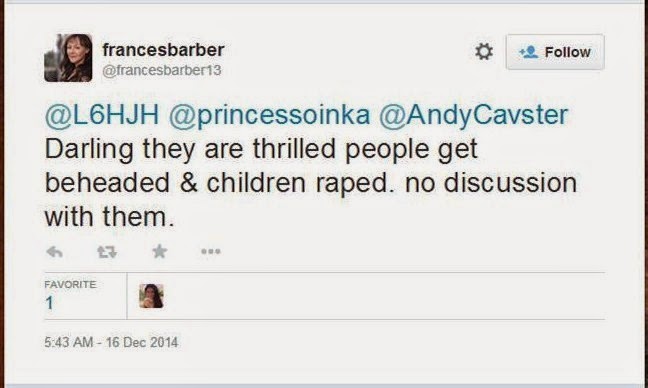 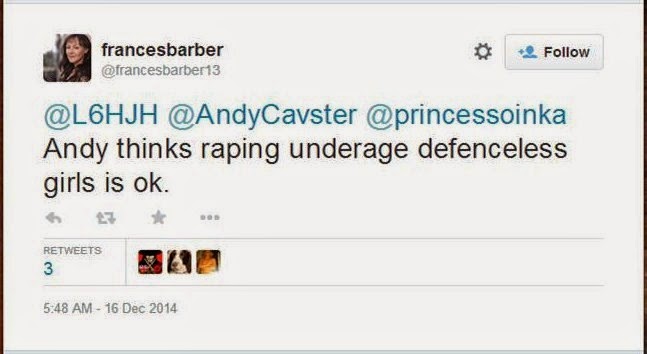 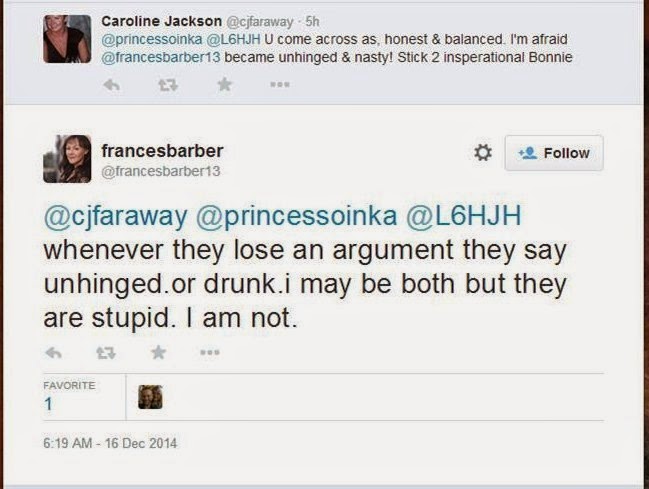 And by now she had lost it: “Darling they are thrilled people get beheaded and children raped. No discussion with them ... Andy thinks raping underage defenceless girls is OK”. That’s out of order. What’s behind the unhinged rambling? “Whenever they lose an argument [!] they say unhinged or drunk. I may be both but they are stupid. I am not”. Ah, a drunk Twitter rant. All is explained.

Stay away from Twitter when you’ve become Elephants Trunk, Ms Barber. And hope that your reputation might one day recover from this most unfortunate behaviour.
Posted by Tim Fenton at 12:55

Great post, Frances never really made it as an actress, bit parts in Morse and Dr Who. Yes Franny seems to think she is an expert on all topics and also that dissenting voices must be banned on Twitter. Her part in Silk neglects vital aspects, one cannot be extradited for having an opinion!

You lose credibility when you write ''Frances never really made it as an actress, bit parts in Morse and Dr Who''. Look at her CV and look at her reviews; she's an exceptionally good actress and she's in demand -- for far more than ''bit parts.'' Critique her Twitter posts all you like, but don't pretend that a highly regarded, very talented actress is little more than a bit player.