The Mail On Sunday has made a name for itself of late with a series of front page splashes which had next to nothing to support the headlines. The claim that so-called “Jihadi John” had been at least wounded was not supported by the accompanying article, and the idea that Cliff Richard was to sue the BBC sadly lacked a single word of comment from him. This less than illustrious campaign continues with today’s offering, with the headline thundering “Thatcher ‘Murder’ Is BBC’s Book At Bedtime”, with readers then informed “Radio 4 ignores protests to give author’s ‘sick and perverted’ fantasy a coveted broadcast slot”. The main headline may sound familiar: this is because the Mail titles have been here before.

The reference is to Hilary Mantel’s recently published collection of short stories, one of which is an alternative reading of recent history called The Assassination Of Margaret Thatcher – August 6th 1983. This is clearly a work of fiction. Back in September, the Mail lined up The Usual Suspects in an effort to build its campaign of faux outrage against Ms Mantel, partly because she is a successful author.

And, as it was in September, those suspects are the same: Tim Bell, attempting to occupy the moral high ground despite being caught openly, er, stimulating himself by hand in full view of passers-by, Tory MP Conor Burns, a professional nonentity who once met Mrs T., and of course (yes, it’s her again) Nadine Dorries. To this is added the usual tired accusation of left-wing bias by the Corporation. 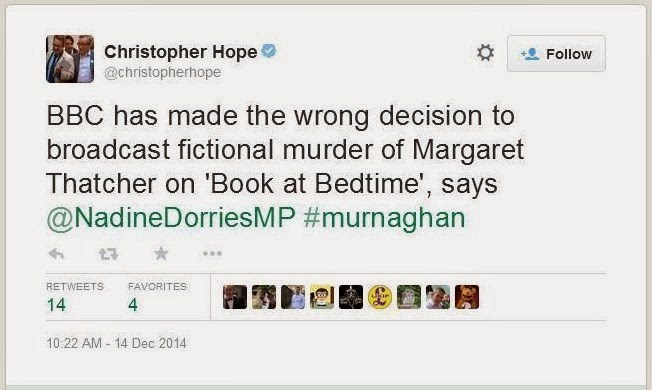 Readers are told “The broadcast on January 9 will increase tensions between the BBC and the Government after David Cameron and George Osborne accused the Corporation of bias in its coverage of spending cuts”. Andthe Radio 4 executive who may have commissioned the work also gets a kicking: she “came under fire after critics claimed there was overt Left-wing bias in the station’s comedy programmes”.

But then a thought enters: despite all the adverse views expressed, what exactly is the fuss over, and what protest has been made? The broadcast is a single 13-minute slot – the other three programmes will feature other Mantel short stories – and the MoS does not show one instance of anyone making representations to the Beeb. All they have is responses to their journalists’ contact.

The thought also enters that the audience for Radio 4’s Book At Bedtime may not reach the same number of people at the BBC’s TV channels, but then, that is not the point: the MoS is merely trying to gain maximum outrage for minimum outlay, and indeed for minimal factual backup. The only reason the Corporation, and Ms Mantel, have been targeted is because they are not the Mail’s kind of people.

Meanwhile, in the real world, people are generally getting a life. Hint, Mail hacks.
Posted by Tim Fenton at 13:18

It's pathetic, isn't it? They've quoted Norman Tebbit, who I can understand might feel somewhat uncomfortable with this considering what he and his wife went through in Brighton thirty years ago, but this is no more that a "What If" story in the Alternate History genre.

If Thatch was still with us, I suspect she wouldn't have given two hoots about it. And furthermore, if it was called The Assassination of Gordon Brown, the same Mailites who are commenting that this should be banned would be volunteering to pull the trigger.

‘An exhilarating, if dark, collection … ‘The Assassination of Margaret Thatcher’ is a small triumph: a lesson in artfully controlled savagery’ Sunday Times

‘The best stories in the collection … combine sharp observation and sly wit with a subtle burrowing into the recesses of her protagonists’ heads. The darker stories recall both the metaphysical speculations of Jorge Luis Borges and the trickery of Roald Dahl’ Mail on Sunday

Late April 2013 BBC Radio 4 Book Of The Week: Margaret Thatcher: The Authorized Biography and on BBC 2 TV:Young Margaret:Love, Life And Letters. Added to this the rose tinted relationship between Dorothy Hodgkin and Margaret Thatcher portrayed in the Radio 4 Afternoon Play in August this year: The Chemistry Between Them.
Biased BBC – only when it suits.