Watching hacks and pundits pull mardy strops because events turn out not necessarily to their advantage is a pleasure to be treasured by those who regard politics as a spectator sport. And there has been particular pleasure today as Mil The Younger has travelled to Great Yarmouth to address real people, pursued by those who scrabble around the dunghill that is Grubstreet. 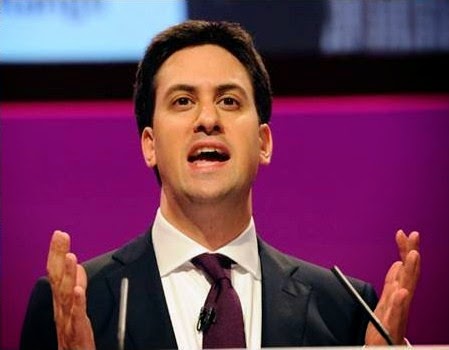 To give some added spice to the proceedings, the Telegraph got hold of a Labour internal paper on how to approach voters on the subject of immigration, took a couple of lines out of context, and then when Miliband answered ordinary voters’ questions instead of yielding to the press pack, threw their rattle out of the pram and declared “Ed Miliband criticises own party's advice to MPs”.

But, as Captain Blackadder might have observed, there was only one thing wrong with this idea – it was bollocks. There was no “Labour immigration row”, and the “Labour MPs told not to campaign on immigration in secret Ukip strategy document” headline was, as Ian Dunt at politics.co.uk has concluded, “cynical nonsense”. Miliband had gone over their heads. That was what they hated.

The hacks brought this on themselves: at Miliband’s Senate House speech recently, the press’ sneering brought forthright condemnation from, you guessed it, more of those ordinary voters who have inconveniently declined to buy into the cynical, carping, and, yes, deeply partisan agenda set by editors and proprietors who are scared shitless of a Labour victory next May.

But the Telegraph, and the rest of the press pack, had gone all the way to somewhere a long way from the Westminster village, only for the Labour leader to hardly pay them any attention at all. This they hated yet more, and so there had to be retribution. And here came the most mardy of mardy strops, thrown in no style at all by Dan Hodges, formerly the Colonel Nicholson of the Labour Party.

“Labour's immigration policy is an incoherent shambles ... Ed Miliband and his party are staggering around like pub drunks, following Ukip, not following Ukip, slurring tough talk they can't back up” he whines, knowing he is talking out of the back of his neck. Then he slips in a whopper: “Labour tells its candidates and its activists they should not raise the issue of immigration on the doorstep”.

Did he read the document his paper is using to kick Labour? As it actually says “listen carefully to electors' concerns on immigration on the doorstep and engage with their views before moving the conversation on to how Labour would tackle the issues they have raised”, probably not. He’s just bawling his head off because he hates the Labour leader – he wanted the other Miliband to win.

The Telegraph got disrespected in Great Yarmouth? That is not our problem.
Posted by Tim Fenton at 17:30

Labour try to stay calm on immigration - some Tories say they are scared of discussing it.

Labour try to raise the issue in an open discussion - some Tories accuse them of underhand tactics! http://www.theguardian.com/politics/2014/dec/02/labour-accused-immigration-push-polling-crewe

Perhaps the Tories should get their position on this sorted out!

I seem to remember at his CBI address, EdM took questions. The first one came from Chris Ship of ITV News, some flim-flam about his brother. The booing that Ship got seemed only right and proper.

I really think the media are alienating people as badly as the politicians have done, by their obsession with vans and bacon sandwiches and the like - my only possible response to any contemporary Nick Robinson analysis to shout 'Stop pretending to be so stupid, you patronising gurgler, and do your bloody job better' at the radio until it stops.

They are as guilty of Westminster Village Hammerhead Disease as anyone elected to that awful, awful place.