Of all the memorable images from the time when the Murdoch Screws was closed down back in 2011, one edition of Newsnight stands out. Here, before The Inquisition Of Pax Jeremiah, former Screws features editor Jules Stenson squared off against the Guardian’s Nick Davies and presenter Ann Diamond. Somewhere on the periphery, Lord Hunt attempted to get himself noticed. 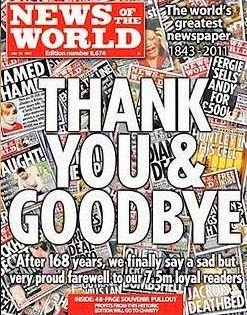 Where Jules Stenson used to work ...

Stenson was, by his own admission, there merely to try and pick holes in Davies’ stories on the Screws hacking of Milly Dowler’s phone, with a side order of misrepresenting a later article about the Super Soaraway Currant Bun obtaining confidential medical information on one of Gordon and Sarah Brown’s sons, and publishing it in defiance of their wishes.

In other words, Stenson was, in the case of the Screws, attacking Davies for something he could only have corrected had he been given access to a time machine, and in that of the Sun, was, not for the first time with a Murdoch journalist, defending conduct which had veered over the defensibility line. He was roundly condemned by Davies and Ms Diamond, and, for good measure, by Paxman too.

However, and here we encounter a significantly sized however, Stenson’s most uncomfortable moment came when Davies confronted him with his own past deeds, telling anyone watching that Stenson had “engaged in criminal activity”, including the hiring of private investigators – such as Steve Whittamore – who were breaking the law in the course of their information gathering activities. 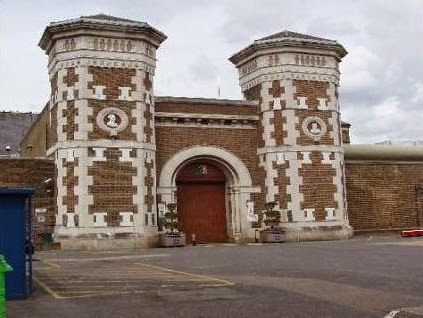 ... and where he may soon be residing

Why Stenson might have appeared uncomfortable has now been revealed: he appeared earlier today at a case management hearing at the Old Bailey, and there he pleaded guilty to conspiring to hack phones. Yes, the faithful Murdoch retainer who sat there in the Newsnight studio and ranted in the most righteous tones at Nick Davies admitted that He Done It after all.

Stenson and the Screws’ former Deputy Editor Neil “Wolfman” Wallis “were accused of conspiring to illegally listen to voicemails with Andy Coulson, Greg Miskiw, James Weatherup, Neville Thurlbeck, Dan Evans, Ian Edmondson, Glenn Mulcaire and others unknown between January 2003 and January 2007”. Wallis pleaded not guilty, and will go on trial next June.

Dan Evans, who gave evidence against Coulson in the earlier Hacking Trial, and who has admitted hacking phones, “gave evidence during [that] trial that Stenson employed him specifically to do ‘stuff with phones’”. While he was trying to call out Davies on Newsnight, he knew full well that he had been a party to criminal activity. A more jaw-dropping exhibition of Brass Neck would be hard to imagine.

Don’t expect him back on Newsnight to apologise, mind. Jail is highly likely.
Posted by Tim Fenton at 16:58

I seem to remember passing comment at the time that he appeared apoplectic with rage. And of course he was sent to batter Nick Davies on the one in his case and that no one has been able to clear up since possibly because certain people don't wish it cleared up?

Cue outrage at justice taking so long - if only certain parties had fully co operated with The Met (with whom some had a "special" relationship) it could have proceeded so much quicker eh what?

17.30 comment
"flaw" after "one" seems to have gone astray. It 's just one flaw after another/