EXCLUSIVE Guido Fawked – Thrown Out Of The IoD

When think tank ResPublica celebrated its fifth birthday at the Institute of Directors (IoD) on Tuesday evening, director Phillip Blond’s address “set the tone for the rest of the evening, ensuring minds were firmly fixed on the long-term and enduring issues of our time”. What the celebratory tone did not tell was that one of those enduring issues was the perpetually thirsty Paul Staines. Feared. According to Himself Personally Now

What Staines and his rabble at the Guido Fawkes blog have not told their readers is that, despite their having consumed more than enough during their pre-Christmas lunch earlier that day, two of their number were still thirsty well into the evening. And it was to the IoD that Staines and his tame gofer, the odious flannelled fool Henry Cole, fetched up, only to be refused entry. 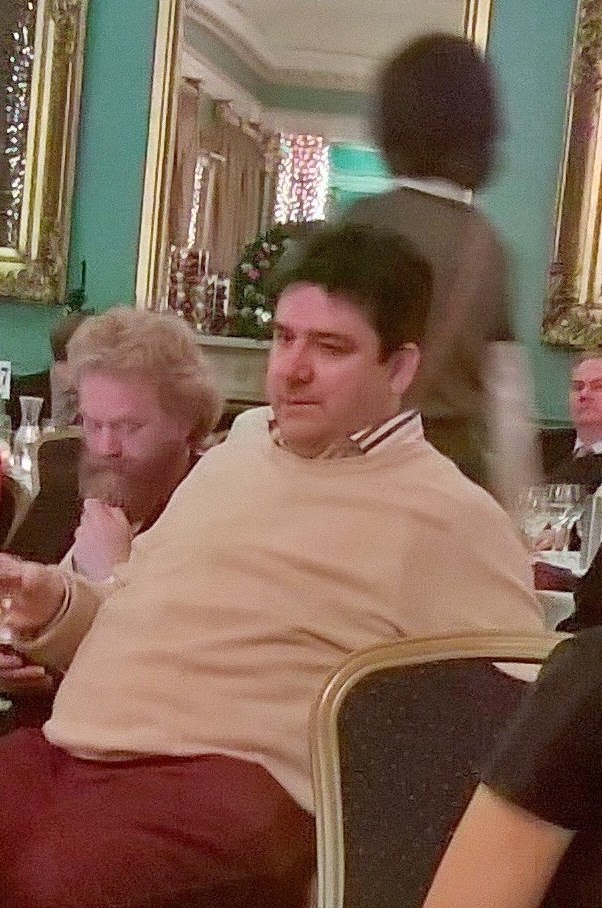 This was because the pair of them were already in an advanced state of alcoholic derangement. But while Cole, a mere amateur gatecrasher, did as the security chaps told him, Staines managed to get past them, and into the ResPublica bash, where he secured a large glass of white wine and a seat on which to slob out. 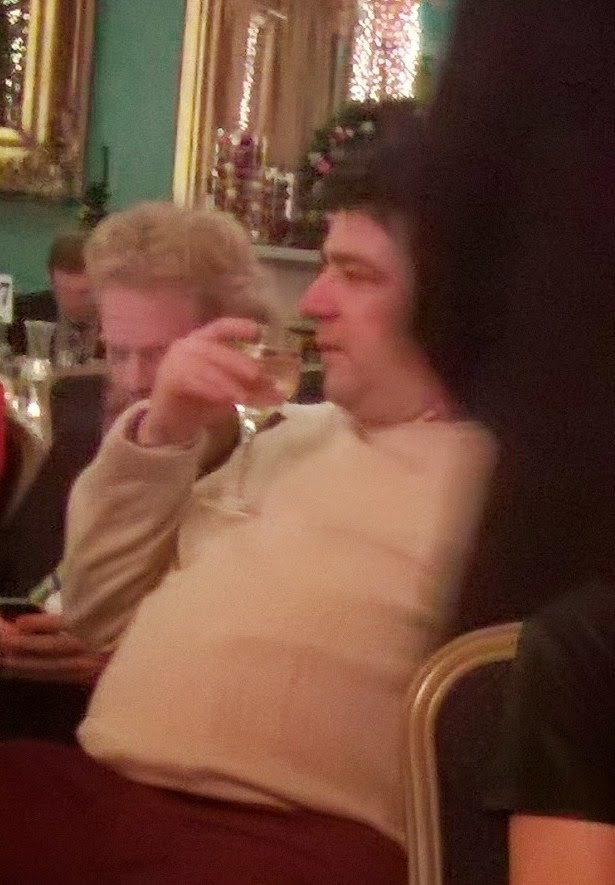 Hasn't he had enough? Oh go on, just one more glass

The budding Mr Creosote then succeeded in getting the glass to his lips, before consuming the contents in short order. This was undoubtedly the correct course of action, as the security bods then descended on The Great Guido and ejected him. 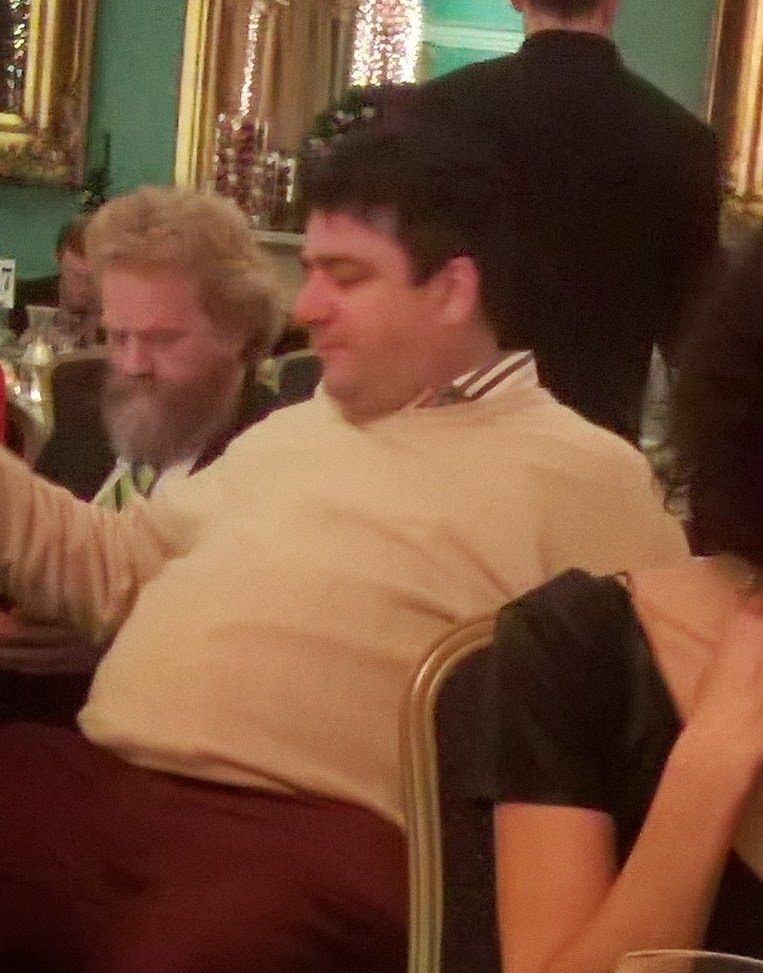 Shit, do all those bellies belong to me?

Strangely, those assembled seem not to have noticed the drunken intruder – or perhaps they were either so used to seeing Staines in an overtired state, or prepared to keep schtum and hope the news didn’t get out. 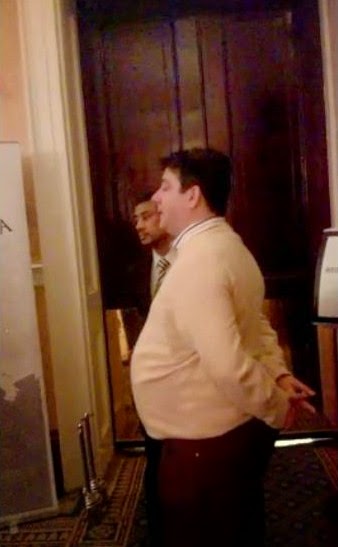 But get out it has, with photos and videos arriving on Zelo Street, showing not only the appallingly wasted Staines slurping his vino, but also the aftermath as his efforts to get back in were firmly rebutted and he was shown the door. The one marked Exit. 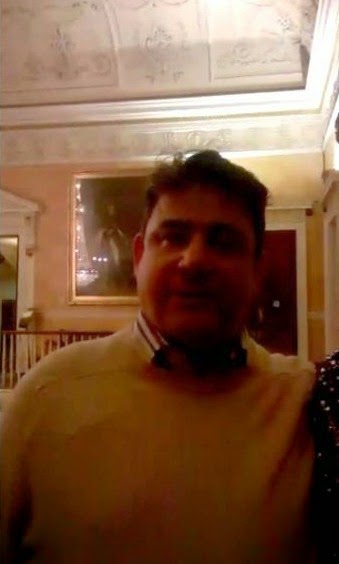 Why are you fer-fer-fer-filming me?

After realising that he was on his way out, The Great Guido, clearly unsteady on his feet, began to object to being filmed, until it was pointed out to him that he did that to others all the time. There were occasional moments of coherent speech, but these were punctuated with all too many expletives. 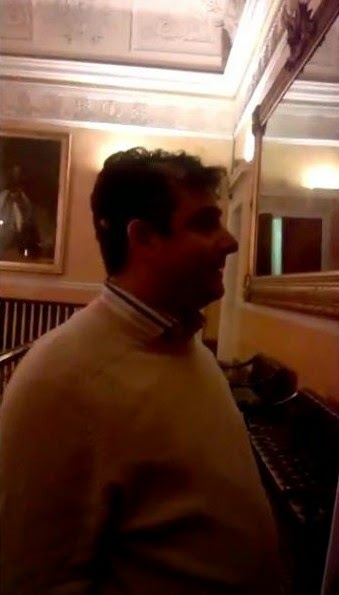 But I wash invited. I think

Staines briefly protested that he had been invited to the ResPublica bash. This, too, was less than successful. And then it was back downstairs to be reunited with Master Cole, before being decanted onto Pall Mall and the inevitable stagger in search of a watering hole prepared to tolerate his presence.

The Great Guido loves to call out others for being ratarsed. One wonders how he will react, now that the boot is so clearly on the other foot. Another fine mess.

[UPDATE 1455 hours: following a number of enquiries concerning the videos made available of Staines' ejection from the IoD, here is one of them, with The Great Guido clearly unsteady on his feet and slurring his speech.
Staines also confirms that Master Cole is "downstairs", as well as saying he has not been doing Coke or drink driving, which is a relief. He then proceeds to swear and is briefly petulant with staff, before accepting that his presence is not welcome.

And politicians are supposed to quake in their boots at this sight? Maybe not, eh Paul?]
Posted by Tim Fenton at 11:03

It's a great new story
Of a news thirsty Tory
Of a blogger that's gone to seed
He should not have drunk so much
Fellow bloggers take heed.

You must remember this
That when you're greatly pissed
Not to try it on at the IOD
A fundamental truth of life is
You'll going to need a pee.

He must have been (reasonably) well behaved, usually bouncers employ the "chicken wing" to gain egress of drunken louts.