Highest Up the Wall In Manchester

I have flown many times with EasyJet: some years ago, I flew with them twice a week in the course of a work assignment near Amsterdam. And, yes, I’ve experienced the occasional instance of Passengers Behaving Badly, including those who board the aircraft in a state of advanced alcoholic derangement and then make a nuisance of themselves. 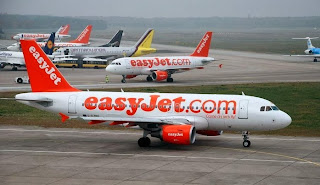 Not a good idea to have one for the road

But none of those came close to what happened the other day at Manchester Airport, when a passenger had to be read the riot act by the aircraft’s Commander and then undertook a bizarre ritual after disembarking, stripping to his underwear, then stripping completely naked, and challenging the captain to a scrap, before his partner had enough and slapped him across the face.

Fortunately for all in tabloid land, the Manchester Evening News (MEN) got hold of video and still coverage, although even this missed the continuation of the man’s unusual behaviour as he then relieved himself against the wall of Terminal 1 (as one does, no doubt) and then had to be “dry Tasered” by the rozzers, before finding himself to be well and truly nicked.

And to think that the MEN used to be part of the same newspaper group as the Guardian. So who are they allied to now? Trinity Mirror group, that’s who, and so the Mirror has wasted no time in featuring every item from the MEN this morning. Two hours later, the web magpies at Mail Online had got hold of the photos and video too. And the Police statement is priceless. 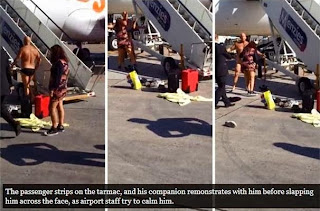 “Police were called to Terminal One arrivals of Manchester Airport following reports a man was drunk and being abusive to passengers on a flight from Malta ... As he left the plane, he took his clothes off and urinated against a wall ... A 52-year-old man was dry tasered and arrested on suspicion of being drunk and disorderly in a public place. He was issued with a Fixed Penalty Notice”.

Yes, the Police have already prepared for such an event by calculating the appropriate level of fine for being ratarsed, making a nuisance of yourself on an aircraft, stripping naked, threatening the captain and pissing up the terminal wall. Meanwhile, the MEN and Mirror are looking to identify the bloke, and, given the images and the flight details, that may not take long.

In the meantime, one source of information is silent on the incident, showing undue reticence, given all the ITV fly-on-the-wall coverage. Yes, EasyJet are deploying a straight bat. Why might that be? Everyone who wants to know has seen the image of the bloke stripped off in front of one of their Airbuses. Well, perhaps discretion is the better part of valour here. And perhaps it isn’t an isolated incident.

Don’t get Elephant's Trunk before getting on the plane, folks. It never ends well.
Posted by Tim Fenton at 17:19

It takes 3½ hours to fly from Malta to Manchester so, he probably got sissed as a pewt onboard.
btw: It's elephant's trunk.

I like easyjet - don't take any crap from these people.

Last year at Munich a stag party turned up. The groom was in a poor condition and then said something inappropriate to the supervisor. Next minute the police are there taking him off. The rest of the group had been quiet so they could stay said the supervisor. To which the groom shouted, "we're all in this together aren't we lads!" Apparently none of them had ever met him before.........