Hello, good afternoon and welcome to Zelo Street where we’re about to kick off a topical series of blogposts showcasing the desperation of those in and around the Fourth Estate at the prospect of genuinely independent press regulation. Such levels of desperation, in fact, that it crosses the line into forthright dishonesty. So without further ado, let’s greet the first contestant to play Spot The Whopper! 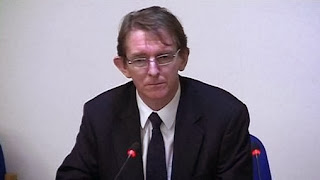 Yes Tony, he's one of yours

And what is your name, good sir? Tim Stanley, I’m sorry, Doctor Tim Stanley, I see, and you’re from the bear pit that is Telegraph blogs. Now, take your time Doctor, and give us your best shot in this opening round of Spot The Whopper! What’s that? “The Daily/Sunday Telegraph ... probably the best newspaper in the world”. Yes, that’s a magnificent whopper to start with! But let’s stick to press regulation.

“The Left is ... likely to use the [Ralph Miliband] story this week to push hard for statutory control of the press [so that] Parliament had the power to muzzle journalists”. Yes, that’s a seriously good double-sized whopper Doctor, the cross-party Royal Charter does not mean statutory control, and would prevent political interference of any kind with the press.

“The Guardian ... forgot that a year ago they branded David Cameron’s Dad as a tax dodger”. Yes, that’s a whopper, because Cameron senior did nothing illegal and they didn’t say he did, but I can’t give you that, because it’s already been pitched by Grant “Spiv” Shapps, although I can give you credit for re-using a whopper from a particularly dishonest politician. Even for the Tory Party, folks!

“This week, the Privy Council meets to consider the future of press regulation and the Hacked Off crowd will be pushing hard for Parliamentary control”. Yes, that’s a brilliantly dishonest statement: Hacked Off won’t be doing anything of the sort. But I can’t give you maximum points because you forgot to blame Hugh Grant or Steve Coogan, and didn’t even have a snark at Evan Harris.

“The newspaper industry has already put forward proposals for self-regulation that amount to the toughest in the Western world”. Oh my goodness, stop for a moment Doctor, the mirth level is just too much. Are you sure Tony Gallagher hasn’t got his hand up your jacksy? But yes, that’s a straight whopper: the industry proposals are just a Mark 2 PCC, right down to editorial and political interference.

“They [the Left] want to end press freedom as we know it and impose a new politically correct order upon our public sphere”. Yes, another superb whopper, because the cross-party Royal Charter guarantees press freedom, but then, perhaps you meant “freedom to get away with bad behaviour and sod the little people who got trampled on”. Either way, you’ve set the whopper bar seriously high.

That’s all for this opening Spot The Whopper, folks. But we could be back soon.
Posted by Tim Fenton at 17:05

Stanley is becoming a second rate Ferguson, another historian carefree with the facts in order to become a paid ideologue of the right.
I used to buy History Today but he's in it too frequently along with some apologist for Enoch "in no way a grubby little opportunist who played the race card for votes" Powell. The mag is even touting the opinions of Simon Heffer on history – as if that is actually going to convince anyone to buy it.
I console myself with the knowledge if liars, stupid hacks and loud mouthed idiots are the best the right can do, then they are doomed.
Still Stanley and co ruined what used to be a decent read now and again.