Ralph Miliband – Where They All Go Wrong

While the obedient hackery of the legendarily foul mouthed Paul Dacre keep trying to wrest control of the news agenda back from Mil The Younger, and play the victim in order to garner support for their cause (with zero success thus far), nobody has yet noticed that the assumption underpinning so many of the attacks on Miliband père is totally without foundation – except for insistence and hot air. 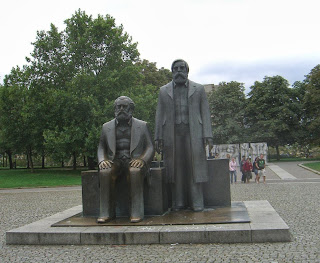 At the bear pit that is Telegraph blogs, many contributors’ posts link to an earlier piece by deputy editor Benedict “famous last words” Brogan, “Whether he hated Britain or not, Ralph Miliband was one of the Cold War's bad guys”. Thus the game was given away in the headline: Ralph Miliband took no part in the Cold War. So why is Brogan trying to link him to it?

Ah well. “Before 1989 the divide between the good guys and bad guys was clear, because the bad guys were out to do us in” he goes on, which, if he means the Warsaw Pact countries, is at best contentious and at worst mere paranoia. “Labour wanted unilateral disarmament, and some of its members were all too willing to excuse communism and play the role of useful idiot for the tyrants of Moscow”.

That’ll be the “fellow traveller” myth, then. And what does this have to do with Ralph Miliband? Here goes: “back then, he was one of the bad guys ... the key point surely is that Marxism hated – hates – Britain ... before the Marxists ... lost the argument, it wasn't just some academic debate: it was deadly serious ... Ralph Miliband ... was on the side of those who wanted to turn Britain into something dreadful”.

The assumption is that Marxism equals what was practiced in the Soviet Union and its satellite states, and that Miliband père supported that. And this is total bullshit on both counts. Marxism does not equal totalitarianism or dictatorship, and Ralph Miliband went on record frequently to denounce such practices. His Marxism was one rooted in democracy – Brogan’s own paper says so.

Sadly, without the Soviet connection, the idea that Ralph Miliband was some kind of fellow traveller collapses, and much of the knocking copy with it, for instance the smear job by Michael Burleigh in the Mail, where he tries to link Miliband père to Josef Stalin, because he knew someone who was a member of the Communist Party. That’s how lame the basis for much of this really is.

The singularly unsavoury Rod Liddle does not rise above that level: other than to suggest that Ralph Miliband wasn’t a very good writer, he asserts that “when Miliband began his work” Marxism “was a potent threat to our way of life”. Again, the Cold War Soviet false assumption. Only by assuming that Miliband père supported something he definitely did not support can the assertion be stood up.


That is why most of this knocking copy is so much rubbish. No change there, then.
Posted by Tim Fenton at 16:48

Any chance of some digging into Quentin letts (not) statement that Ralph miliband wanted us to lose the Falklands War.