While revelations about the surveillance programmes undertaken by the USA’s National Security Agency (NSA) keep on coming, today’s being in the Washington Post, former Tory MP and recent taker of the Murdoch shilling Louise Mensch continues to wage her increasingly desperate and fruitless battle against the deeply subversive Guardian over starting the NSA ball rolling. 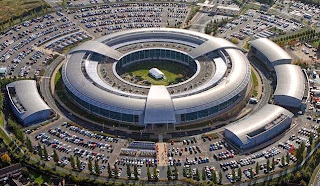 Ms Mensch has decided that nothing less than criminal charges against those at the paper whom she has nominated will be sufficient, despite her being challenged to back up her wildest claims with the odd shred of solid evidence and continually failing to do so. Thus it was that the routinely mischievous Sunny Hundal, editor of Liberal Conspiracy, joined that challenge yesterday. What kicked everything off was a question from former Tory Minister Liam Fox, friend of Adam Werritty, to Young Dave suggesting that the Guardian had damaged the so-called catch-all concept of “National Security”. Ms Mensch judgmentally talked of the “Guardian breaking the law”, then asserted the paper was “breaking [the] Terrorism Act 2000 on GCHQ”. 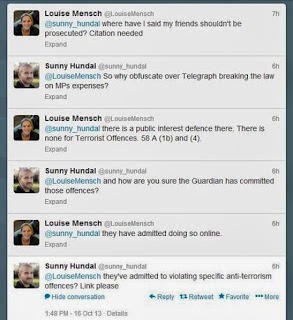 Sunny Hundal was surprised: “and how are you sure the Guardian has committed those offences?” he asked, to which the Mensch reply, dishonestly, was “They have admitted to doing so online”. Mr H asked her to nominate a specific offence, and that was all that was needed to set her off on her tired and wild accusation that the Guardian had somehow identified GCHQ staff (it hadn’t). 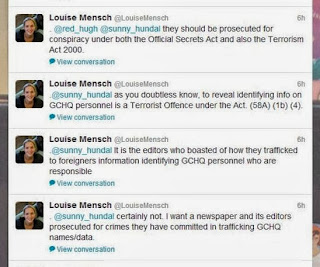 “I want a newspaper and its editors prosecuted for crimes they have committed in trafficking GCHQ names/data ... it is the editors who have boasted of how they trafficked ... information identifying GCHQ personnel ... they should be prosecuted for conspiracy under both the Official Secrets Act and also the Terrorism Act 2000” came the replies as she appeared to lose her grip on reality. 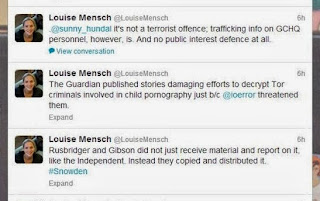 And so it kept on coming, with the repeated and false assertion that the Guardian had identified what Ms Mensch likes to call “agents” (how an act of terrorism might be facilitated by letting everyone know that GCHQ has an internal Wiki that carries the canteen menu and sports fixtures is not told). But quite apart from her argument being blatantly false, Ms Mensch has missed one further small detail.

The Guardian’s NSA information came from former contractor Edward Snowden. He was not working for GCHQ, nor for any other arm of British intelligence. So Ms Mensch is asking us to believe that the level of intelligence sharing between the UK and USA is such that we pass them details of our staff. That is veering beyond credibility, even for Louise Mensch.

I wonder how La Mensch is coming to terms with Cameron going cap in hand to a Communist state to supply our nuclear energy requirements?

Especially after her outburst over the leftie Occupiers of St Pauls daring to use the capitalist organisation of Starbucks to supply their caffeine requirements.

Dare one hope for Spontaneous combustion?