Yes, this is the hundredth post in the series I began back in July 2009. While most of the press ignored the Guardian’s revelations, and their right-leaning supporters in the blogosphere sneered and called it a “non-story”, it was screamingly obvious that the Murdoch empire was in potentially serious trouble. You can read the first posts in the series, laying out the background, HERE, HERE, HERE, HERE, HERE and HERE. 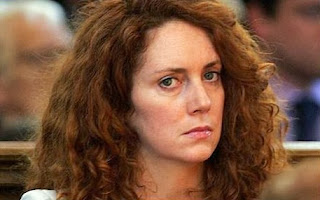 Rebekah Brooks. What a happy soul

So now many of the those familiar faces face trial, a trial that begins today at Court 12 of the Old Bailey. As Press Gazette has noted, “There will be 17 press places in Court 12 of the Old Bailey, London's main criminal court, with a further 53 journalists from around the world following proceedings in an annexe. All the press places have been allocated”. Nobody’s calling it a “non-story” now.

This cross-section of recent Murdoch retainers has been charged with a variety of potentially serious offences, including conspiracy to hack phones, conspiracy to commit misconduct in a public office, and conspiracy to pervert the course of justice. As befits such a grand occasion, 25 barristers will be present to represent the Crown and the defendants. The trial is expected to last well into next year.

So nobody should expect a quick outcome. There will be little to report for much of this week, as the jury is selected and sworn in, and a variety of legal arguments are settled. And we should all exercise care over what is said about this trial, bearing in mind the contempt laws and the necessity that the defendants get a fair hearing. That last is the most important point.

This is why “Mr Justice Saunders, who is presiding over the case, and the attorney general have already issued warnings to the media reminding them not to stray from the strict Contempt of Court Act reporting rules in the UK, which require fair and accurate reporting of trials as they happen. There are particular concerns that MPs will comment on the trial because of Coulson's former role in Downing Street”.

We must all exercise tact, discretion and patience. If something is revealed during the trial, fine, we can say so. But any speculation and rumour should be put aside. You can also follow events with the excellent Brown Moses Hackgate Files blog, the #Pressreform blog (updated regularly), and of course Hacked Off will cover the trial. But give them a fair one – something the press hasn’t always given its victims.
Posted by Tim Fenton at 10:18

Then after the trial we will be able to have the rest of the Inquiry into the practices of the press: or will we? Will it be forgotten or abandoned because it is too close to the election?

Yes, it will be forgotten about and abandoned.
David Cameron will escape unscathed and we will continue with a toothless regulator (think OFGEM etc...)
No change there then.

The second part of the Inquiry is less focused on the question of a regulator, and is more related to questions about the relations of certain sections of the the press with the police and politicians. I suspect that this is very sensitive and is why there is a lot of worries about comments on this on blogs: comments about that area get modded out in many places (I know because I have experimented on various blogs to see what you can get away with).