Appearing back on the Zelo Street radar soon after the last time she was called out for another example of rank hypocrisy, former Tory MP Louise Mensch has been at it again, as she continues her one person campaign against the deeply subversive Guardian and all who represent it. And, if she’s going to face both ways at once, I’m more than happy to call her out for it. 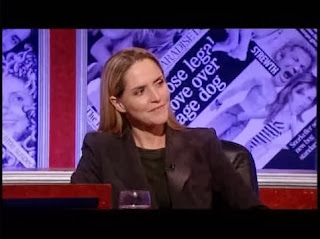 Has she got news for us? Nope.

Ms Mensch has become convinced that former NSA contractor Edward Snowden has handed Alan Rusbridger’s team the names and personal details of thousands of what she calls “agents”, although how this term can be used for someone who does admin or otherwise gofers within GCHQ is not told. And she keeps saying she is going to provide evidence for this contention, but sadly it never materialises. 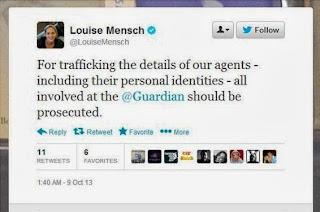 But she is sure of one thing: what the Guardian, and Glenn Greeenwald in particular, have done is Very Bad Indeed, so much so that she keeps banging on about it, only to find nobody at the paper is bothered. And she knows that the paper is “trafficking the details of our agents – including their personal indentities”, so it should be prosecuted RIGHT NOW. 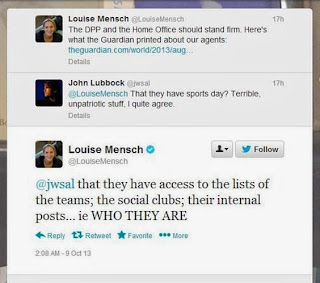 And just in case you didn’t get that, or are in the least sceptical, as one Twitter user has been, Ms Mensch will put you straight: “they have access to the lists of the teams; the social clubs; their internal posts ... ie WHO THEY ARE” (not even a hint of this has been given by the Guardian, but hey ho). 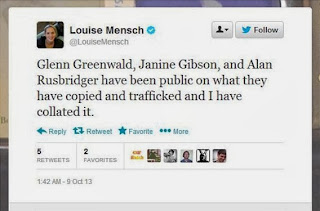 Who are these bad people: “Glenn Greenwald, Janine Gibson and Alan Rusbridger have been public on what they have copied and trafficked and I have collated it”. Ah so, their names have gone on the list. She’ll be warning us about serving her soggy chips next. 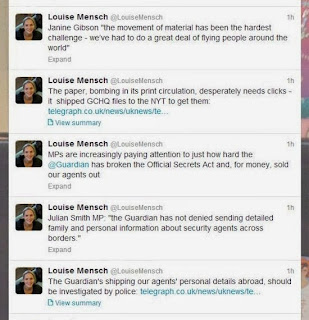 So what’s to be done? The Guardian “should be investigated by Police ... has broken the Official Secrets Act ... sold our agents out” (she does love to talk about “agents”, as well as “tradecraft” – too many John Le Carre books there – “trafficking”, and “muling” as if the paper were a drug cartel). But what d’you think she said when Glenn Greenwald first revealed the PRISM program? You’ll love this one.

Here is Ms Mensch’s first reaction to the news: “Really we should all congratulate @ggreenwald on his colossal #PRISM scoop”. There it is, everyone, and why did she take that line? Just out of sheer partisan wilfulness, so she could have a go at Barack Obama, who, er, did not start the PRISM program. That is truly lame, even compared with all the other Mensch hypocrisy.

Still, it keeps her busy and Uncle Rupe happy, so that’s all right, then.
Posted by Tim Fenton at 07:43

the 'messed up' mensch, her own words, when she got owned by john lydon in the days before she handed her seat to labour. The messed up mensch might not be from 'tring', but i think we all get john's drift :)