The anguish of the right-leaning part of the Fourth Estate this morning is a sight to behold: after their Royal Charter on press regulation – effectively a Mark 2 PCC, which would have allowed the press to carry on marking their own homework – was finally and formally rejected yesterday, the cries of an end to press freedom are ringing out, and they know exactly who to blame – the Guardian. 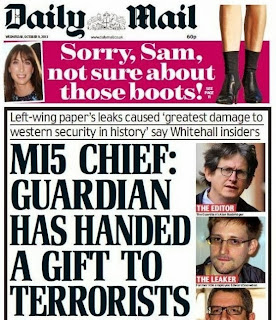 Wait, what? Did Alan Rusbridger and his team take part in drafting the cross-party Royal Charter? Did they declare their unswerving support for it? Are they in any way, shape or form, connected with the Hacked Off group, which has got much of the press frothing away this morning? Well, no on all counts, I’m afraid. No, the Guardian’s sin has been the expression of free speech.

But hang on a minute, the rest of the press are all in favour of free speech, so much so that they are steadfastly opposed to anything that, in their view, may intrude on it. How can they not support the expression of free speech, whatever the media outlet concerned? Ah well. Here we encounter the ability of rather too many hacks and editors to face both ways on the same subject at the same time. 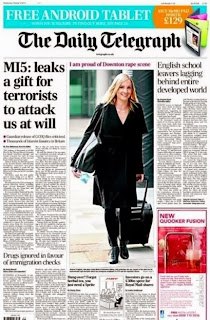 This tendency to resemble the proverbial town hall clock has been provoked by that catch-all called National Security. As the Maily Telegraph dishonestly reported, “Andrew Parker, the director general of the Security Service, said the exposing of intelligence techniques, by the Guardian newspaper, had given fanatics the ability to evade the spy agencies”. Parker did not mention the Guardian. Not once.

Nor did he mention Edward Snowden, although this did not prevent the legendarily foul mouthed Paul Dacre approving the placement of the former NSA contractor’s photo on the Daily Mail’s front page today. “Guardian has handed a gift to terrorists', warns MI5 chief: Left-wing paper's leaks caused 'greatest damage to western security in history' say Whitehall insiders” is their equally dishonest headline.

“Whitehall insiders”, of course, is Mail-speak for any of its reporters that have stepped inside any Government department located there. But all this ranting does not explain why free speech is so wonderful, except when the Guardian does it. Until we read why “Nosey” Parker is so concerned. “GCHQ intelligence has played a vital role in stopping many of the terrorist plots that MI5 and the police have tackled”.

And what kind of terrorists might they be? “The ability of Al Qaeda to launch the centrally directed large-scale attacks of the last decade has been degraded, though not removed”. Yes, say the magic words and all is clear: the Guardian stands accused of making it easier for SCARY MUSLIMS to kill us all. Not, of course, that the Mail and Telegraph want to frighten their readers, you understand.

Although this will garner a few more sales along the way. No change there, then.

[UPDATE 1505 hours: that "Nosey" Parker did not mention the deeply subversive Guardian once in his speech was clearly lost to the bear pit that is Telegraph blogs, where Damian Thompson, clueless pundit of no fixed hair appointment, has gasped in horror "BBC reports MI5's warning about terrorists and Snowden leaks. Not one mention of the Guardian".

Very good Dames, that might be because Parker did not himself name the paper - as well as the other moderately inconvenient fact that other media outlets, including the NYT, WaPo and ProPublica, have also published material related to the Snowden information. And their copy is readily accessible to anyone in the UK.

The article telling that Parker did not actually name the Guardian can be found in the Maily Telegraph. That's your paper, Dames. You're welcome]
Posted by Tim Fenton at 10:48

Congratulations on being so quick off the mark!
One very good reason why the Mail has mentioned the Guardian can be found on the back pages of this week's Guardian G2 sections where Dacre is the subject of Steve Bell's cartoons, which should provoke much apoplexy at Northcliffe House.

Oh, the UK press. Actually the leaks have undermined efforts against terrorists. You just have to read real, independent security experts to get some handle on the serious damage Snowden and Greenwald have caused - damage they have said they wanted to cause!

Neither they nor Wikileaks believe we should have any spy services. Is that the position of the left now? We should disarm and have no spooks at all?

Yet this sort of analysis is absent and it becomes 'which side are you on'? Mail vs Guardian. This is pathetic.

I draw your attention to the comments of James Burke, which went unnoticed > http://paulocanning.blogspot.co.uk/2013/10/tomorrows-world-nsa-james-burke-reflects.html

I can take the argument that publishing has ADDED damage but most was done before the documents got near to the Guardian.

Even if the Guardian and various foreign media had said no thank you there would have still been a big problem with Snowden walking around with the files. And even if Snowden hadn't taken them there would have been a huge problem in that who-knows-who-else could have done (and for all we know, has done so).

I actually agree because the culture of leaks came before Snowden. Aaronovitch makes the case that the exact types needed for security - young geeks - are the exact types likely to leak.

I do think there's a mass need to seem important, 'they're spying on me', here. White, Western middle class angst. There's also the idiocy in damning normal spying, which everyone does and is generally a good thing, we want government's to be informed.

We do already know that leaks have damaged tracking terrorists, look up situation in Pakistan. The Guardian may not headline this but it's a fact.

We should all at least question whether Rusbridger - let alone Greenwald - should be the arbiter of what should be secret but apparently such thoughts are disallowed on the UK left.