Anyone reading the Tory Party version of the latest story to come out of their attempt to dump anything bad about the NHS at the door of shadow health man Andy Burnham might by now have got the impression that the MP for Leigh really has been doing a regular ward round emptying an Uzi into as many elderly patients, and those in A&E, as he can find. 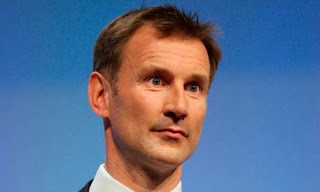 Whose hand up the ministerial jacksy?

The sheer ferocity of the attack has gone beyond mere political exchange, to the point where Tory desperation to claw back ground on the issue – where Labour still enjoys a healthy lead in every opinion poll going – means that they have to sling whatever mud they can at Burnham in the hope that some of it will stick. The main weapon is, as with much of their NHS bashing, “death rates”.

Why that phrase is in quote marks is deliberate: as Zelo Street regulars will know, using Hospital Standardised Mortality Ratios (HSMRs) instead of factual information is not a reliable indicator of health outcomes. But that does not stop the press from wheeling out Brian Jarman, or of course him wheeling himself out, to continue plugging the concept that continues to make him money. 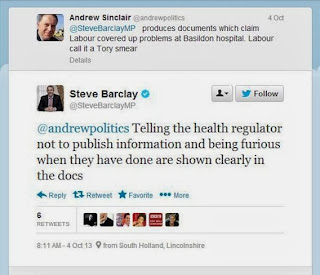 And it also enables that part of the press whose editors and hacks go private to lay into the NHS, as with the latest story on the release of a report into Basildon and Thurrock NHS Trust. Jeremy Hunt (the former Culture Secretary), aided and abetted by no-mark Tory back bencher Steve Barclay, has been creatively reinterpreting emails garnered from FoI requests.

Hunt’s conclusion? “There is now a strong body of evidence that Labour ministers leant on the hospital watchdog to cover up poor care, leaving hundreds of patients to suffer under a system that put political priorities first”. That verges on the incendiary, and unfortunately the emails do not support his assertion, not unless they are accompanied by someone to say “They really mean THIS”. 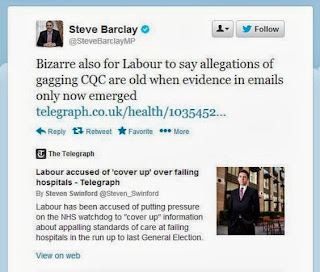 What the emails actually tell is that the Care Quality Commission (CQC) briefed the press about the report into Basildon and Thurrock, but should not have done before notifying the Department of Health. Strangely, the press is happy to side with the CQC over its right to brief anyone anytime, but then wants to kick it over an assessment of Basildon and Thurrock which apparently missed problems. 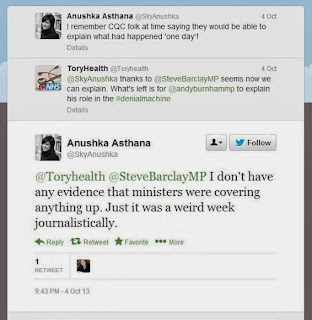 And what is also clear is that Andy Burnham is more than willing to stand his ground, pointing out that this story has already been covered. Those who have previously reported on the case, like Sky News’ Anushka Asthana, haven’t seen any evidence of a Labour cover-up. Papers like the Mail and Telegraph have previous for this. The impression is given that it’s just another smear of Burnham.

Why would the Tories rather not rather talk about their handling of the NHS instead?
Posted by Tim Fenton at 17:12

so the over 2 thousand people who die in unusual circumstances, like Dartford, mid staffs, Basildon, barrow, are just tory smears then...

You are welcome to provide a reliable citation for that statement, but somehow I doubt that one will be forthcoming.

Dear Anonymous, the Francis Report highlighted that "as many as 1" person may have died "needlessly", not 1200+, also Keogh's report didn't highlight that 14 trusts had needlessly killed 13,000 patients, that was just the press!

HSMR's are produced by the Doctor Foster Unit and are the baby of Prof. Jarman, they are not very accurate at highlighting mortality as the bench mark constantly shifts meaninng that 50% of all hospitals will have results worse than the other 50%. Also they are based on the correct coding of how someone died, the coding it seems is quite complex but no training is provided so it is likely to contain many, many errors. Also HSMR doesn't count certain types of death, or where the death occured. Also the UK Government is signed into a contract to use HSMR and "push" for their acceptance. Also, although Prof. Jarman doesn't earn anything from their use, his son does due to being a paid employee of DFI.

“It is clinically meaningless and academically reckless to use such statistical measures to quantify actual numbers of avoidable deaths. Robert Francis himself said: ‘It is in my view misleading and a potential misuse of the figures to extrapolate from them a conclusion that any particular number, or range of numbers of deaths were caused or contributed to by inadequate care’.”

And finally, the only person who can actually state 100% that the death was needless would be a clinician after carefully studying the patients case notes.

I am not suggesting for one moment that there have not been significant failings in the NHS or that people have died (it is the nature of hospitals after all that people will die in them). What I take offense at is the constant use of stats that simply cannot be trusted to smear the NHS.

Statements such as the one by "anonymous" are common in all news outlets (except now the Guardian - which has apologised for saying this sort of thing in the past). Could I point out that:

2) whilst there have been episodes of poor care in the NHS, there is no evidence that this has led to excess deaths in any particular institution

Isn't this just the first stage (see also Cameron's conference speech, all that looking down the camera etc) of their only electoral strategy - to claim that they've been forced to undertake the terribly unpopular things they've done because of 'the mess Labour left'?

Problem is that Labour are wise to this obviously Crosby-inspired strategy and will be able to hammer back fairly effectively (which is the reason Ed has gone all out vs the Mail) thus denying the kind of 'media narrative' the Tories need for this kind of shit to work.

One thing I'm still quite unclear on - the Tory leadership candidates aren't really a very PR-friendly bunch are they? Hunt is a car crash from start to finish as this demosntrates, incapable of even the most basic briefings, Gove is immensely unpopular, Osborne seems to crave dislike. Yet they're the best hopes...?