As the ruckus over the Daily Mail’s crude and amateurish hatchet job on Mil The Younger refuses to die down, the Labour leader’s cause has been helped immeasurably by the actions of a number of fellow travellers on the right. Here, the stench of hypocrisy and lack of principle is all-pervading as those who rush to defend the legendarily foul mouthed Paul Dacre fall flat on their collective faces. 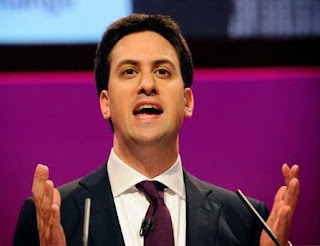 Paul Dacre's increased our poll lead by this much!

First to leap to defend the Mail’s editor was the deeply unsavoury Rod Liddle, writing in the Spectator, one of the few media outlets that is still prepared to give him houseroom. But Liddle, the man who seriously damaged the BBC by bringing one Andrew Gilligan to the Corporation, does not help the Mail cause one bit, as he indulges in tired stereotypes and false assumptions when discussing Marxism.

“When Miliband began his work, under the tutelage of the horrible Harold Laski, it was a potent threat to our way of life” he asserts. Only if you buy into Cold War paranoia, Rod. Meanwhile, over at the bear pit that is Telegraph blogs, Dan Hodges allows his hatred of Miliband to cause the red mist to descend: “If Ed Miliband wanted his father to be off limits, he should have kept quiet about him”.

Then he rows back a little, conceding that “I know from first-hand experience what it’s like to have members of your family attacked in the media. It’s horrible”. What he fails to grasp is that all the brickbats aimed at Glenda Jackson come from his new pals on the right. Those of us who admire politicians of independent mind also admire the candour of mums Like Wot He Has Got. 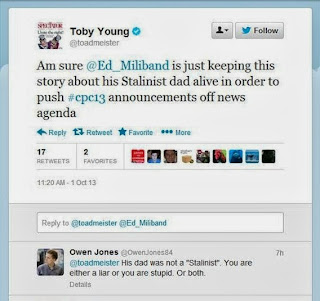 But still they come, with the loathsome Toby Young (that’s the Honourable Toby Daniel Moorsom Young, folks) accusing Miliband of “just keeping this story about his Stalinist dad alive in order to push [Tory Party Conference] announcements off [the] news agenda”. Ralph Miliband was not a Stalinist, and Owen Jones gives Tobes short shrift on this. So that’s another display of ignorance, then. 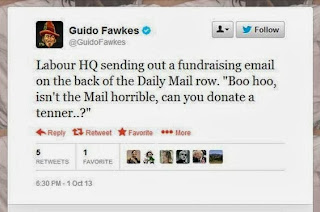 Then the biscuit was well and truly taken by the rabble at the Guido Fawkes blog, with the perpetually thirsty Paul Staines jeering “Labour HQ sending out a fundraising email on the back of the Daily Mail row. Boo hoo, isn’t the Mail horrible, can you donate a tenner?” – this from the man who reacts furiously to his own family being targeted: “F*** with me, and I f*** with you”. And f*** right off yerself. 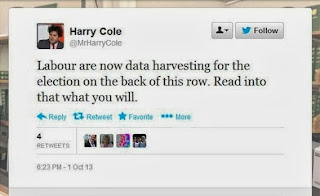 And then Staines’s tame gofer, the flannelled fool Henry Cole, brought his advanced sense of paranoia to proceedings: “Labour are now data harvesting for the election on the back of this row. Read into that what you will”. Like he was data harvesting for his new masters in the Fourth Estate outside Steve Coogan’s house on Monday evening of last week. Except that was OK, wasn’t it, Hen?


With friends like this shower, Paul Dacre needs no enemies right now.
Posted by Tim Fenton at 10:48

this nice little feature will tell anyone everything they need to know about staines...a reminder of the days when he was apparently trying to forge an 'anti-left' alliance between the federation of conservative students and the bnp!
http://guidoforks.blogspot.co.uk/2007/02/tory-student-leader-in-racist-party.html

Worth catching tuesday's PM on radio 4 in which Harry Cole demonstrates how you can slither under a snake, even with your best top hat on.

Hodges's line on this is the most depressing - claiming over and over again that the piece was 'not personal but political' and suggesting that anyone who claimed otherwise is somehow guilty of intellectual fraud. But Hodges is simply lying. The piece is an entirely personal attack as are its follow-ups. The fact that Hodges is also employed by the Mail is probably worth mentioning too - but Hodges never does.

It's funny, too, the fact that I'd already heard hodges's line on this before reading his piece, because he' whoring himself around to every broadcaster available as a 'left-winger who supports these pieces' - and even when he's on 5 live or wherever else he can't help himself from attacking Ed M directly, demonstrating his obvious partiality.

You probably read it already, but Nick Griffin is sticking up for the Mail. A++ allies right there.

Dan Hodges strikes me as truly pathetic. He still has the line about having 'tribal loyalty' to Labour on his Telegraph byline, which basically means he gets asked onto telly to talk about Labour because his mum is a Labour politician. That doesn't seem a very solid long term career plan, especially when his writing is so predictable.

I've read one really good piece by him - which was surprisingly not about Ed Miliband - so I can see he has some talent, but he seems to be on a pathway to oblivion unless he finds himself a new topic.

I think Hodges's long-term career plan is one a lot of Blairites/pro-Iraq 'left-wingers' have already followed, ie write exclusively for the Tory press about how awful Labour are. Problem is that his sources are running very thin indeed already. There is hope - as long as he finds seomthing else to write about, like Nick Cohen and 'freedom of speech' (though a lot of his writings on that are anti-Labour rants) - but at the moment he's showing little sign of having anything to say other than 'everything Ed Miliband does is wrong'.

The toys-out-of-the-pram episode over Syria, where he left the party, was a massive mistake - out of step with public opinion AND political opinion too, leaving him with precious little link to the left wing at all.