We know that kicking the hated BBC is de rigueur for papers like the Mail and Telegraph. But, with Grant “Spiv” Shapps opening up on the Corporation this weekend with an attack quite clearly designed to intimidate in the run-up to the 2015 General Election, the knocking copy takes on an additional significance. And it has also taken on a new level of hectoring and pettiness. 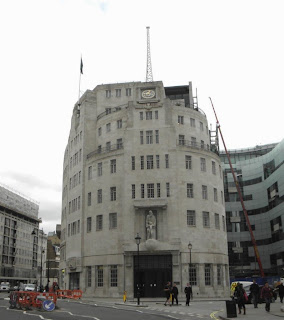 A prime example of this is last week’s edition of Have I Got News For You, where Jo Brand hosted in her usual inimitable style – which means there was humour of an occasionally adult nature, but nobody would take any of the remarks seriously. That is, of course, unless they were paid by the Mail or Telegraph to sit there monitoring the show in order to report back to their respective editors.

Ms Brand said of the christening of Prince George of Cambridge “George’s godparents include Hugh van Cutsem... I presume that’s a nickname as in Hugh van cuts 'em and Harry then snorts 'em”. Prince Harry probably fell off his chair at that point, but the Tel was in stern mood. When Ian Hislop said – not totally seriously – “Have we lost the lawyers?”, the paper was deeply affronted.

“Hislop’s acknowledgement on air that Brand’s comment was defamatory suggests that the BBC was aware of the allegations it was broadcasting” it stormed. The Mail followed up: “The blunder is the latest in a series of slurs this week about the young royals during the BBC's coverage of Prince George's christening. Last night, Jeremy Paxman forgot Kate Middleton's title as he announced her return to public life on Newsnight”. The Mail forgot that she ain’t called Kate Middleton any more. Idiots.

On top of this, there have been attacks on the Corporation’s news coverage, including one attempt to equate criticism from Iain Duncan Cough to proof of bias. The author of the piece, David Barrett, will be familiar to Zelo Street readers: he did the attack on the Guardian’s NSA coverage that had been fed him by the spooks.

And the icing on the cake? Yes, it’s the deeply subversive Guardian’s fault: “Russell Brand and how Newsnight's become the Guardian's TV lapdog”. And how many Mail readers give a flying foxtrot about Newsnight? But put it all together, and you have what looks more and more like an orchestrated attempt to support Shapps in his dubious endeavour. The temptation to finally get the BBC is clearly overwhelming.

So expect more of this for at least the next 18 months. No change there, then.
Posted by Tim Fenton at 17:20

What did you think about Ian Hislop's comments on the Leveson enquiry and press regulation a couple of weeks ago?

Didn't catch his latest comments, but posted this observation on his remarks in March: http://zelo.tv/YVR8L2

iDave annoys Murdoch with press regulation proposals, then lets his team start floating suggestions that "other broadcasters" (eg Sky) can do this, that and quite a lot of the other whilst the BBC has their income cut. Distinct whiff of rodent there! Will it be enough to get Murdoch back on side?


And when the Saville revelations broke they were accompanied by a backing chorus of "he used to work for the BBC therefore it's their fault". And what of his mate Teret who was charged with similar offences in the week? All I'm seeing is that he was Savilles chauffeur for a short while, nothing about the many more years working for commercial broadcasters owned by a mixed bag of media companies. Will the papers be leaning on the likes of Signal Radio to hold their own internal inquiries the way the BBC have?

Murdoch has blown the whistle - the spiv has responded. We wait for Oiky and Mr C (the sell of the NH secretary) to respond to their masters voice.
PS Bain Capital and the tories is worth a look.