Despite the propensity for so many in and around the debate on Britain and the EU to resort to sloppy research and occasional dishonesty, there are some who consider a factual approach to be A Good Thing. One such is Jonathan Portes, who recently took issue with the loathsome Toby Young and his Telegraph blogs pal Daniel Hannan, the latter much loved by Fox News Channel (fair and balanced my arse). 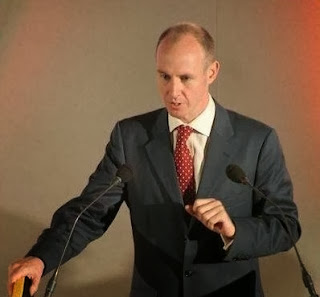 Portes, of the National Institute of Economic and Social Research (NIESR), had critiqued Tobes and Dan in a post titled “Lazy Brits 2: Attack of the Zombies”. Here, he applied a straightforward veracity test to their ramblings, and concluded that they had their facts wrong. And facts were all that it was about. Portes had no problem with their stance, but merely pointed out where they went wrong. 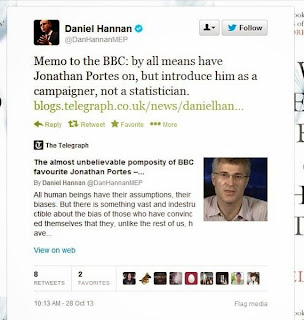 Hannan could have owned up to his errors, but that is not the way with the righteous right nowadays. Instead, he launched an attack on Portes in Telegraph blogs titled “The almost unbelievable pomposity of BBC favourite Jonathan Portes” (note that no opportunity to kick the hated Beeb is left unused – it’s almost as if Tony Gallagher has put out a three-line whip on the subject). 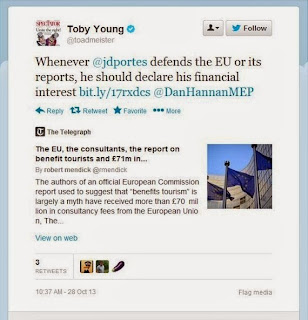 The assault may have been prompted by the loathsome Tobes, who had previously inferred that Portes was somehow in the EU’s pocket because of how NIESR is funded, although the latter does not take a pro- or anti-EU stance. In any case, in the world of Daniel Hannan, not taking a screamingly anti-EU stance makes the person concerned a rotten Europhile who is therefore fair game for attack. 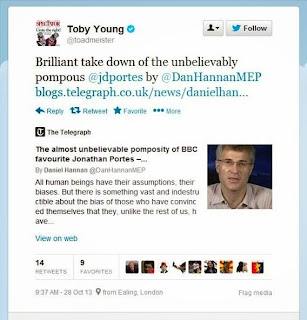 After Hannan published his blogpost, Tobes then praised it as a work of the highest import: “Brilliant takedown of the unbelievably pompous @jdportes by @DanHannanMEP” he gurgled enthusiastically. Also joining in was Dan’s other pal Douglas “Kamikaze” Carswell, telling “Today’s must read is this corking piece by @DanHannanMEP on pro-EU bias ‘think’ tanks”. 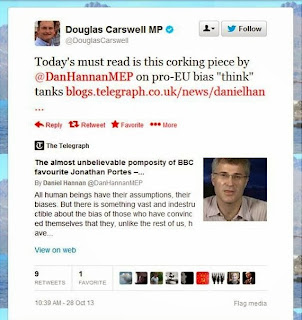 Regular watchers of Tel blogs flocked to view the magnificent missive, only to see that the post was no longer there. There was a good reason for this: it had been taken down after Portes complained about a significant number of falsehoods within it, or, as those of less subtle approach might have put it, it was a pack of lies. Those of us who know Hannan of old will not be surprised. 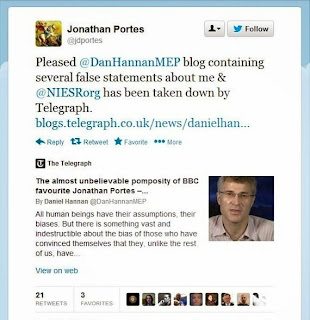 This is, after all, the man who went on Sean Hannity’s Fox News show and trotted out three rank whoppers (“Government takeover of health care”, “Death Panels” and the one about buying your own medication meant the NHS stopped all access to prescription meds as some kind of punishment) in less than five minutes. His reaction to factual analysis is abuse within an incendiary trouser scenario.

You may wonder what that makes Tobes and Carswell. I couldn’t possibly comment.

[UPDATE 1745 hours: Hannan's post has now been put back up at Telegraph blogs, with the content allegedly exactly the same as before. However, for some reason, the title has been changed to "Is there a creature in discovered space more closed-minded than a self-conscious liberal?" for which no reason has yet been advanced.

Jonathan Portes confirms that he has made a complaint to the PCC. It will be interesting to see whether he achieves anything by going down that road, but he should not be too hopeful, given the PCC is the embodiment of the press marking its own homework. And what of Hannan's post? To no surprise, it is the usual petulant resort to abuse, backed up with appalling research - for instance, one NIESR paper he cites in his attack on Portes was written seven years before the latter joined the organisation.

Still, it would probably pass muster at Fox News, so that's all right, then]
Posted by Tim Fenton at 16:30