The Mail On Sunday’s resident misery guts – and this week he really is in Miserable Git mode – is Peter Hitchens, who is aghast at the prospect of the Royal Train having to be decommissioned some time in the near future. This so concerns him that he would rather worsen the crime rate among those ordinary people among whom he does not move, in order to fund a replacement. 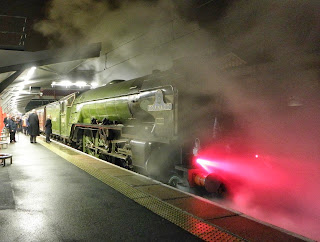 Tornado with the Royal Train at Crewe

Is the Royal Train that old? Well, the two end vehicles in a typical formation are BR Mark 2s with opening windows, which makes them around 45 years old. The remainder are BR Mark 3 coaches, some from the prototype InterCity 125 train, and the rest from production builds. But the Mark 3 has been out of production for more than 30 years, and it would be impossible to build nowadays.

For starters, although the Mark 3, of all-steel monocoque construction, has shown itself to be very good at protecting its occupants in a crash, the coaches would not pass modern safety standards. And they suffer increasingly from corrosion, a process that cannot be held back forever. By 2020 the ones in the Royal Train will be at least 40 years old. Retirement of their main-line cousins will begin soon.

Moreover, the age when BR, as was, could just reshuffle the pack to make up a Royal Train, with the Government of the day seeing them right, are long over. The expense of having a one-off train of free standing coaches – to satisfy Hitchens’ requirement for occasional steam haulage – would be eye-watering. And all new train orders are inevitably franchise route specific.

But Hitchens is not put off by mere facts. His solution? “How about the methadone programme, for which George Osborne mugs the taxpayer of nearly £300 million each year, on behalf of criminal heroin abusers?” he opines. Yes, how about a journalistic dinosaur parading his ignorance and prejudice? He thinks those people commit crimes. With no treatment they would commit a heck of a lot more.

And the wider community should tolerate having treatment programmes effectively dumped on them, so that money can be diverted to allow Hitchens and his pals to demonstrate their ability to grovel and scrape before symbols of power and privilege, providing something that “would give dignity to the monarch and pleasure to the people”. I’d go for the pleasure of less drug related crime, thanks.

So off goes Hitchens, whining “But our Leftist elite reckon that, if they can’t have palaces, trains and yachts, nor can anyone else ... And the ill-named Conservative Party is too scared of the BBC and the Guardian to defend such things”. Oh f*** right off Hitch, the civil list and Royal estates won’t stretch to the cost, and if you want the Royals to have a new train, get someone to open their wallet. You won’t.

The Royal Train was for a time, but maybe not for all time.
Posted by Tim Fenton at 14:53

Pre-nationalisation Royal Trains were usually built by rival rail companies as sort of publicity stunts to try and beat the opposition (in much the same way the current Royal limo was done by Bentley whilst Rolls Royce was still getting organised in it's new form).

When the current Royal Train was needed BR had the modern but non-standard prototype Mark 3 coaches sat doing nothing so the cost was really the refurbishment rather than full build, the extra vehicles for staff were little more than a paint job.

Today, where do you start? There are no slightly used prototypes sat around looking for a use. The train companies all go for fixed length unit trains, some diesel, some electric and never have prototypes. There is no way a new train can be cobbled together on the cheap and the TOCs have no reason to compete for the prestige. The best hope is Hitachi building a bi-mode ICEP fitted out for VIP use. That would the wrong side of £15million cost to them, a bit more than the cost of the Bentley! And Hitachi have yet to build an ICEP of any configuration. Bombardier won't even offer a bi-mode train for normal use!

But the cost of the train isn't really the problem. After all, it's less than 50p per tax payer and no doubt many companies would chip in a bit for the advertising value. The big problem is the storage and maintenance to start with - the current contractor has gone bust and attempts to rescue them are not going well. And then there's the often inefficent operations. e.g. they go up to Balmoral for summer so train has to be worked empty from depot (currently near Milton Keynes) to Euston, then up to Aberdeen. And then what? there's no secure sidings there so they bring it all the way back south empty. And when she wants to come home they have to do the whole lot in reverse - and it all costs money. And if she has to come home urgently it's no use because it will take at least 8 hours to get back to her plus the journey home. She went to the Royal Welsh Show in it a few years ago. Very eco-minded. But the route from Buith Road station to the showground was deemed a security risk so they had a helicopter meet the train to fly her the last 5 miles. And where did the helicopter come empty from.....?

Won't there be some spare Mark 4 coaches from ECML when IECP replaces them?

Yes there will be a whole fleet of Mark 4 coaches displaced by ICEP. By the time they become available they will be a quarter of a centruy old with all the corrosion and stress issues that will bring. Their class 91 locos are electric and equally (if not more) knackered, therefore unreliable and unable to reach the huge areas of Britain still living in the railway past without electricity - meaning they would still have to use repainted freight diesels to pull the train. We could buy a couple of new bi-fuel locos for about £2.5 -3 million but there isn't the Royal work to justify it unless another company has the same locos and can pool resources (and at present, no-one does). And they would still be pulling a compromise.

Either we do it properly or not at all.