HS2, Crewe, And A Monorail

There are certain key words that should instantly set off the bullshit detector of any reasonable and intelligent person. And one of those words is Monorail. And what should set that detector going even louder is when someone pitches the M-word in the context of a middling sized town like Crewe. But then, some of our local politicians are not the sharpest knives in the drawer. 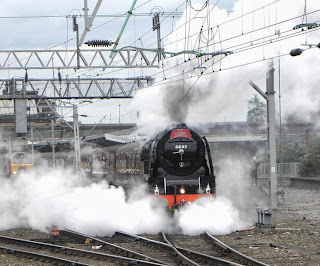 Duchess Of Sutherland restarts a charter from Crewe station ...

Right now, Crewe station is undergoing a refurbishment, which mainly involves demolishing and clearing the former Royal Mail site on Weston Road, along with long-unused buildings at the East end of Nantwich Road. The space will be used to provide a new entrance for the station, together with a proper taxi rank and better drop-off facilities that those available at present.

So when the BBC runs a piece that starts “Crewe could get a new railway station, plus monorail, as part of plans to build the high-speed rail line HS2”, the thought enters that someone is having a laugh (in any case, HS2 would pass under the station area in Crewe, and would not be part of it). The article then goes on to name-check Cheshire East Council leader Michael Jones.


That Jones may be behind the story is yet more worrying when he “said he had held ‘positive talks’ with Network Rail about building the new station 300 metres from the existing one”. Now, the idea of moving Crewe station has been floated before, only to be shot down when Network Rail discovered to their horror that the locals had rumbled their motives and wouldn’t buy it.

But moving it 300 metres would be a pointless exercise. I will illustrate this with a photo. Crewe station is 158 miles from Euston, and the actual milepost marking this distance is located around the mid-point of what is now Platform 11. The next quarter-mile marker is only just off the end of Platform 9, and is quite clearly visible (painted yellow) next to the departing steam locomotive. 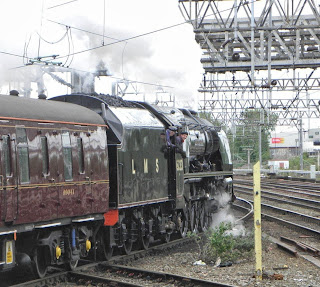 ... and passes the point just over 400 metres further on

So either Jones has missed a Zero off his distance, or he’s talking crap: that quarter-mile post is at least 400 metres away from the mid-point of the station platforms. To move it such a short distance would be pointless. And on top of that, Zelo Street can reveal that Jones has not brought his Super Whizzo idea to the full Council. My source at Cheshire East had not heard about this proposal.

Where Michael Jones got his “monorail” idea is not known. What is known is that a town the size of Crewe would not warrant the building of one. Nor is moving the station 300 metres going to improve matters for travellers, and in any case it is utterly irrelevant to link such an idea to HS2. So it has to be concluded that the leader of Cheshire East is going rogue, and that the BBC has fallen for it.

Meanwhile, in the real world, the refurbishment goes on. But without the monorail.
Posted by Tim Fenton at 12:58

I think you're getting out of touch with the plans of Kim-Il-Jones and his contempt for bothering with trivialities like discussing them with the council.

Jones (owner of Sanderson Knight Property) has consistently opposed the sensible HS2 Ltd idea of a tunnel and station directly below the WCML and existing station, a plan that involves the demoltion of just one non-railway building in Crewe.

In recent reports in the Chronic-le (never knowingly turn down a prepared piece even if it doesn't make sense) his grand plan has appeared as an artists drawing showing HS2 at the side on the same level surrounded by new property developements (see above re. Jones' financial interests). If he ever bothers to produce anything for the council to look at I suspect the 300 metres is a SIDEWAYS move. Or knowing the inaccuracy of BBC reports, a 300 metres sideways seperation between an HS2 station and the rest of the services.

But the council aren't the only people who won't have been consulted over these discussions. Like his previous vision for the original station (before the HS2 confirmation announcement) which produced drawings showing the Alex Stadium and many homes as available for demolition and redevelopment - much to the surprise of the Alex and home owners - this scheme sounds like it also requires a lot of demolition. And the owners of the properties will know nothing. So until he does come up with any drawings, don't buy anything within 300 metres of the railway.

PS whilst on the subject of Crewe transport, are you aware that Pete Waterman now holds 25% voting power on transport strategy in Cheshire (CEC, CWaC and Warrington). Something else that Jones signed us up for without consulting the council.

I'm afraid this is a pretty minor piece of misinformation going on the the whole HS2/Crewe debate now.

The current contender for biggest porkie is that Crewe gets no HS2 services because Crewe station isn't on the HS2 line. Apparently, Classic compatible trains that join the HS2 tracks almost immediately after leaving Crewe station before zipping straight to London doesn't count.

But then, if it was permitted to think that you don't have to have a station on the HS2 lines in order to have an HS2 service, people might also starting thinking that there will be HS2 services from Liverpool, Stafford, Warrington, Preston, Carstairs, Edinburgh, Glasgow, York, Darlington and Leeds, like it says so on the proposed service plan - and we can't allow people to think that, can we?

21 Jan 2014 Message from "geologist"
Another year another Jones Lie.
No HS2 station at Crewe. Big shame for there was a proposal for an underground station ( HS2 has to dive under Crewe or demolish it )South of the present Rail Station. With a moving pavement connection it would have worked. A station at grade ( ground level ) is literally pie in the sky?