Despite the frequent attempts by the right-leaning part of the Fourth Estate to suggest otherwise, the BBC is not staffed entirely by those of a left-leaning and Guardian reading persuasion, as witness Daily and Sunday Politics frontman Andrew “Brillo Pad” Neil, formerly faithful retainer of Rupert Murdoch, and now also employed by the Barclay Brothers, overseeing the Spectator. 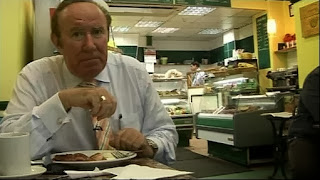 Neil is clearly valued by the Beeb for his interviewing and chairing ability, and with good reason: ministers and their opposition counterparts always need to look sharp when appearing before his inquisition. But here a problem enters: Neil has allowed his views on subjects like climate change to influence the way he approaches interviewees, and his subsequent explanations.

It was not just me that noted the way in which Neil constructed his defence to make his sources – almost universally taken from the ranks of climate sceptics – look like the scientific mainstream, while claiming not to take sides: Andrew Miller, chair of the Commons science and technology committee, was unimpressed with what he saw as too much weight being given to the opinions of sceptics.

Miller told the Guardian “At a time when poor editorial decisions have dented trust in the BBC, the organisation should be taking much greater care over the accuracy of its reporting – especially in the area of science where misreporting can cause disastrous results, as the MMR media scare has shown”. This comes after John Ashton, formerly a senior official at the Foreign Office, also weighed in.

Ashton called the Beeb’s coverage of the latest IPCC report “a betrayal of the editorial professionalism on which the BBC's reputation has been built over generations”. The corporation, he asserted, had given “the appearance of scientific authority to those with no supporting credentials”. So who did Andrew Miller single out for criticism? Yes, it was Neil.

Miller specifically cited the Ed Davey interview which I had commented on, saying “Given that the BBC's avowed mission is still to inform and educate, as well as entertain, it is remarkable that it allows presenters, like Andrew Neil, to repeat misinformed scientific arguments on climate change as though they were fact”. Miller may represent Labour, but he is also speaking as chair of an all-party committee.

He also dismissed the Beeb’s suggestion that Neil was merely playing Devil’s Advocate: “It is right that BBC presenters occasionally act as devil's advocates, but as a public broadcaster and the most trusted media organisation in the UK its viewers need to be explicitly aware when presenters are doing so”. And, as I noted previously, Neil’s explanation, though expertly crafted, was easily picked apart.

It is fine for the Spectator to indulge in open scepticism, but not the BBC.
Posted by Tim Fenton at 13:00

Hmm ... muchas I hate to say this, you may have a point here.

I recently made a complaint to the BBC over a discussion on HS2 following the Conservative mood box. My specific issue was that when there was a discussion of the supposed £50bn cost, Andrew Neil said, I quote, "I think that gets you only to Birmingham". I hardly need explain here how wrong that statement is. My particular concern was that when Andrew Neil and crew research issues so meticulously when grilling front-benchers, it was at best extremely sloppy to get this wrong. Still, they're busy, they make mistakes, a straightforward correction would have kept me happy.

And the BBC has refused to do anything about it, the ground being that people would have taken this figure as opinion and made up their own minds. Which to me seems to be saying that BBC presenters, no matter how senior or how impartial they are meant to be, can make any factually inaccurate statements they want provided they precede it with the words "I think ..."

I do not want to call for the head of Andrew Neil - I want a simple tightening of editorial standards.

Tim - e-mail me off-board if you want the full transcript.

Good catch, a lie doesn't balance the truth. To catch a scientist, you need a....