And so the latest revision of the business case for the HS2 project has been published, with the benefit/cost ratio for the “Y Network” revised down, but still showing a more than respectable figure of 2.3, despite all predictions and assertions otherwise. And the question of time spent working during train journeys has also been covered, so that’s one less objection to deal with. 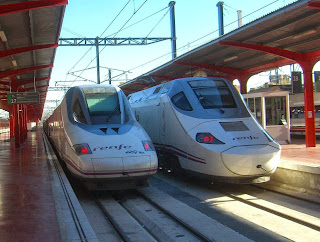 Maybe less than 20 years behind Spain

Moreover, it is now looking not that the project will go ahead, but that Transport Secretary Patrick McLoughlin meant it when he talked about getting the work done in a much shorter overall timescale. There is also talk of building the northern section – Birmingham to Manchester and Leeds, with spur lines to Wigan and Church Fenton (just south of York), before Birmingham to London.

On top of that, it is becoming clear that Labour is not wavering in its support for the project, and to underscore this point, Mil The Younger has brought Andrew Adonis in to advise him. Adonis earlier this year said that cancelling HS2 would be “an act of national mutilation”. So we can forget the impression given by “Auguste” Balls that his party was going cool on the whole deal.

So the window of opportunity for those opposed to the project is closing rapidly, and once Parliament has passed the necessary bills and construction gets under way, it will be Game Over. HS2 Limited has recently acquired a new chairman, David Higgins, former CEO of Network Rail, in a move seen as signalling that the project is ready to roll. So what of the opposition?

At this point we may usefully inspect the site of the so-called Taxpayers’ Alliance (TPA), which has been opposed to HS2 from the start, if for no reason other than it is a public sector undertaking, and so deeply offends the ideological stance of the dubiously talented array of non-job holders. But where is main man Matthew Sinclair? The rebuttal has been left to former ConHome man Jonathan Isaby.

And Isaby merely goes through the motions: “Government ... found wanting ... overestimated the benefits ... underestimated the burgeoning bill ... the case for HS2 is now flimsier than ever ... spin ... HS2 would be a huge white elephant costing every family in the UK a fortune and failing to deliver ... investment”. In the world of the TPA, an investment of £42 billion equals a failure to deliver investment.

Moreover, as soon as you accept a Benefit/Cost ratio greater than zero, the argument that HS2 costs “X per family” based on dividing up the project cost falls flat. But what stands out about Isaby’s statement is not only that the TPA is out of ideas, but its response is so feeble. It is as if they, too, have conceded defeat. In any case, there are plenty of bin collection regimes to whine about instead.

It looks like HS2 is finally going ahead. And it may open sooner rather than later.
Posted by Tim Fenton at 17:08

The really worrying thing is not the attacks by TPA. Or the lack of proper support from political parties.

It's the near total failure of HS2 Ltd to provide decent, targetted information to support their case. Take Crewe, HS2 should be the best thing to happen since the coming of the railways (or possibly the coming of Rolls Royce if you accept that technically the railways came before Crewe existed). Lots of benefits, next to to no negatives. So months ago we should have had a quick local display in a carnival atmosphere and the locals could go home with promotional bunting and balloons to decorate the town. Instead we have some lame, generic leaflets. We have an invitation to a meeting in December (or next January if you read the advert with the mistake). We have useless, supposedly local newspapers rehashing stories of destruction and compensation claim procedures from other areas - unchallenged by HS2 Ltd. We have our Eric Pickles look-a-like council leader going off on a jolly and basically announcing plans to demolish half the town for a super new development which he links to HS2 - again without even an "excuse me?" from HS2 Ltd.

If they are this bad in what should be a safe area is it any wonder they are getting hassle elsewhere?

And if these people can't even protect themselves from bad press can we really trust them to look after building the line? Or are we just hoping that the career civil servants at the DfT will keep an eye on things for us....?