Nothing better illustrated the selective reporting by the press than Phonehackgate. And because at first only the deeply subversive Guardian, and the BBC, were running the story, this gave those trying to ignore it the excuse that it wasn’t really a story at all, and this was all evidence of a rotten leftie cover-up. We know exactly how well that worked out. 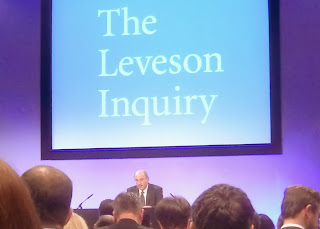 Now there is another example of the genre, this time from one of the senior figures involved with the Leveson Inquiry: Robert Jay, who is now also known as Mr Justice Jay, “told a House of Lords committee on Wednesday that the inquiry encountered ‘difficulties’ because some witnesses were fearful of speaking out”. And he had no problem elaborating on this subject.

“There were witnesses who did not want to speak out against the press because their perception was, to use a horrible word, that they would be monstered by the press at some later date ... I don't want to comment on how well-based their perceptions were but it was certainly a strong perception which gave rise to difficulties”. And, as the man said, there’s more.

“I suspect there were people out there who could have given effective, relevant evidence but just didn't want to”. Now, I’m no law expert – yes, even I have to get a chap to do that sort of thing for me – but this sounds rather like witness intimidation. Of course, the Leveson Inquiry was not a court case, and so this was an avenue of investigation that could not be pursued.

But we can get an idea of who might have gone in for a little witness roughing-up very easily, by seeing who has reported Jay’s comments and who has not. Apart from the Guardian, only the Independent, Press Gazette, and the Huffington Post UK appear to have run the story. The BBC website gives the story a mention in its “Elsewhere on the Web” category.

So who is left? To no surprise at all, both of the Murdoch titles, both of the Desmond ones, the Barclay Brothers and Rothermere titles, and to its apparent shame, even the Mirror. I doubt that Trinity Mirror would have gone in for witness pursuit, and the Express and Daily Star would have waited for someone else to do it and then lifted the copy. But I reckon the rest certainly would have done.

That means the possibility of having the Times, Sun, Daily Mail and Mail On Sunday, both Telegraph titles and most likely the Spectator – through its links to the likes of the perpetually thirsty Paul Staines, who might also be up for slipping information to Rupe and his troops – on the case. That’s a lot of titles, and between them, a lot of seriously bad attitude, plus an appetite for falsehood and misinformation.


And that is why you won’t see them reporting Jay’s remarks. No change there, then.
Posted by Tim Fenton at 10:59