When the Daily Mail published its now infamous attack on Ralph Miliband, calling him “The Man Who Hated Britain”, the real reason for the hatchet job was, to some observers, not clear, although that it had been personally directed by the legendarily foul mouthed Paul Dacre certainly was: not for nothing has Geoffrey Levy acquired the nickname of “Lickspittle”. 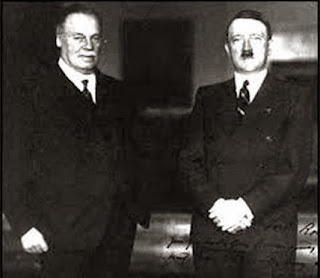 Viscount Rothermere and his idea of press freedom

But today, as Mil The Younger has been grudgingly been given the right of reply by the Vagina Monologue, the cat has been let out of the bag, and by Dacre’s own hand, as Daily Mail Comment, his authentic voice, for the first time acknowledges that the Privy Council meeting next week is of great significance, as it will be considering the cross-party Royal Charter on press regulation.

And the contents of that charter result, as the editorial also acknowledges, from all-party discussions that took place mainly in Miliband’s House of Commons office. Hence the menacing and dishonest assertion “the father’s disdain for freedom of expression can be seen in his son’s determination to place the British Press under statutory control”. That’s “statutory” as in Dacre’s mind, not reality.

The editorial goes on: “Next week the Privy Council, itself an arm of the state, will meet to discuss plans — following a stitch-up with Hacked Off over late-night pizzas in Mr Miliband’s office — for what will ultimately be a politically controlled body to oversee what papers are allowed to publish”. The Royal Charter makes very clear that any new press regulator would be safeguarded from political control.

The Mail’s sick-making editorial tirade concludes “If he crushes the freedom of the Press, no doubt his father will be proud of him from beyond the grave, where he lies 12 yards from the remains of Karl Marx. But he will have driven a hammer and sickle through the heart of the nation so many of us genuinely love”. Yes, guaranteeing the freedom of the press actually means crushing it.

And what Paul Dacre so genuinely loves is to do as he damn well pleases: anyone who gets trampled over in the process is just so much collateral damage, a necessary sacrifice in order to enable him to enjoy his “conversation” with his adoring readers. To still be blissfully unaware of this reality demonstrates to anyone who might not have been sure that the Mail’s editor just does not get it.


Ed Miliband stood up to you, Paul Dacre. He isn’t going away. Get over it.
Posted by Tim Fenton at 10:49

Here is a reminder from Roy Greenslade that the Mail was far from the only fascist sympathiser and appeaser in the 30s - the Mirror and the Times also >> http://t.co/W0ewRDjden

Fascist sympathy is not the same as being mates with Hitler. In the mid 30s Mussolini and Dollfuss, the Austrian fascist Chancellor, actually had a defence pact because they were worried by Hitler. Mussolini started building the Timmelsjoch Pass road for military purposes ready for war with Germany. So, in the mid 30s fascism and Nazism were not always the same thing. The Daily Mail was pro-Nazi.

It is also worth noting that, as of this moment, neither the Mirror nor the Times are currently not attempting to smear someone by smearing their father, primarily on the basis of a diary entry written when he was 17.

In which case, it is entirely justifiable to mention that the Daily Mail was a supporter of Hitler.