Most of the population will not be even slightly concerned about it, but for those in and around the Westminster village, the election yesterday of a Deputy Speaker to replace Nigel Evans, who has stepped down in order to concentrate on fighting accusations of rape and assault, which he has vigorously denied, promised plenty of drama and talking points. 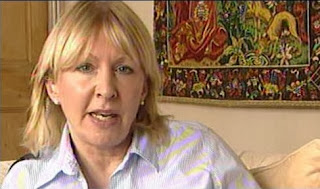 Seven Tory MPs put their names forward (Evans was elected as a Tory, and so his replacement had to be from the same party), among them (yes, it’s her again) Nadine Dorries, who was in full Ron Hopeful mode, having only recently served a suspension from the party whip for piling off to Australia to attempt to become a Z-list sleb by making a spectacle of herself on TV.

Ms Dorries was not, even for her most ardent admirers (don’t laugh, someone has to do the job), a serious contender, and so it proved, as the Member for Mid-Bedfordshire garnered just 13 votes out of 551 cast, one of which would have been that of Herself Personally Now. That represents just over 2% of those voting. She was duly eliminated on the first round.

The only other candidate to score less than 10% of the vote on the first round was David Amess, whose claim to fame was that many years ago he was, as the late Russell Harty might have put it, “famous, nay, notorious” for declaiming the word “Basildon” as many times as he could whenever he was given the chance. Amess scored just 27, and was eliminated next.

But anyone thinking that Ms Dorries would reflect on her clear unpopularity was wrong, as almost immediately after elimination she gave her views to Bedford Today: “Mid Beds MP, Nadine Dorries, claims her chance of being the next Deputy Speaker of the House of Commons was thwarted by her views on abortion”. Wrong. It was because she was not the choice of 538 of her colleagues.

But she was off and running: “One of the Labour MPs told me that Labour are never going to vote for an MP who campaigns on abortion and that’s it. That was a bit of a blow really because it’s not an election based on issues. It is supposed to be one based on impartiality and there is no one more impartial than me”. She’ll be telling everyone how she always gets her facts right next.

As the serially tenacious Tim Ireland of Bloggerheads has pointed out, the fragrant Nadine has also been one of that small number of Tory MPs who have tried, egged on by malicious hacks, to destabilise the speakership of John Bercow. To then ask her colleagues to make her part of that regime really is coming it. That will have counted against her more than her opinion on any one issue.

Nadine Dorries should cut out the excuses and confront reality for once.
Posted by Tim Fenton at 12:58

I don't suppose all those AV opponents might want to explain exactly what was unfair about the result of this election. (Or, failing that, how many of the 150 AV elections to the Australian House of Representatives were unfair. Or any by-election of Scottish Councillors, Northern Irish MLAs, or Republic of Ireland MPs.)

Otherwise, I'm just a bit confused as to how so many MPs can slam AV as an unfair system when they don't have any problem using it themselves.