As a report is released laying out the disruption that would be caused to the rail network by not going ahead with the HS2 project, but instead upgrading the West Coast Main Line (WCML), Midland Main Line (MML) and East Coast Main Line (ECML), the desperation of opponents has brought forth another alternative scheme that is not going anywhere, and has no chance of being built. 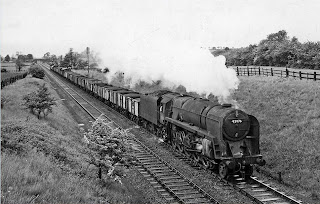 A southbound coal train on the Great Central south of Rugby. Photo taken in 1958

“Railway line shut by Beeching 'can save us £36bn': Critics put forward alternative route using track closed in the 1960s” proclaims the Mail, going wrong from the start as Richard Beeching did not shut any rail lines. He merely made recommendations, and left the Government of the day to make the decisions. So what of this alternative – the long closed Great Central (GC) line?

Mail hack Arthur Martin gets the GC closure totally wrong: for starters, it had nothing to do with Beeching, whose report was published in 1963. Run-down of the GC started in 1958. By the time of Beeching’s report, its through daytime express services had been taken off (1960), Sunday services had ended (1962) and local services were withdrawn the following year.

The Mail also erroneously claims that the GC offered a London to Leeds service, which it did not: the line served Leicester, Nottingham, Sheffield and Manchester. And something else the Mail doesn’t tell its readers is that the GC was designed for a top speed of just 75mph, although in practice, speeds of 90mph were regularly achieved. Not much of an alternative to HS2.

It gets worse: much of the line has, in the intervening 47 years, been built over or used for other purposes: for instance, an extension to the Nottingham tram system will use the formation south of the city. The line beyond Sheffield, through the Woodhead tunnel, was closed more than 30 years ago and, again, much of it has been built over (the tunnel is now used to carry high frequency power cables).

The site of Nottingham’s Victoria station had a shopping centre built on it. Viaducts and bridges have fallen into serious disrepair or have been demolished. Tunnels would need rebuilding. Any budget for re-using the alignment would have to treat it as a new build, not a reopening. And the opponents to HS2 in the Chilterns would be simply replaced by those in towns like Brackley.

All of this would mean that the supposed £6bn price tag can be taken with a very large piece of salt. Moreover, the lines into which the GC formerly fed – those leading into London’s Marylebone terminus – are now close to capacity, especially at peak periods (unless some capacity enhancing demolition along the route is proposed). The exercise has not been thought through. It’s a dead duck.

And, as Andrew Gilligan is also involved in its promotion, that is no surprise.
Posted by Tim Fenton at 12:40

The Grand Central idea is sufficiently reasonable idea to warrant fair consideration. After all, the main justification for HS2 is that you need new lines.

So, let's look at the section with the biggest potential, from London to Rugby. This is a potential alternative to HS2 phase 1, whose prime mission is to free up capacity on the insanely overcrowded southern section. In order to do a like-for-like comparison of costs, we will have to be comparing phase 1 costs of £17bn without contingency.

Let's start by looking at what this could achieve. It is not clear what speed they propose, but 140mph along most of the route towards Rugby shouldn't be too difficult if it's straight and has no stops. 140mph is important, because if the GCR from Rugby to London is substantially slower, you'll have trouble getting people to use it.

As far as capacity relief goes, it should be effective. Same speed trains can run at up to 18tph. In practice it will be less, but an easy capacity-relieving measure would be to run some WCML services via the reinstated GCR to London, freeing up the WCML for the extra suburban services it badly needs. So far, so good.

So let's look at practicalities, starting at Rugby. One look at Google Maps will show you a problem here. The original GCR did not join the WCML, it went under. Building a chord would require the demolition of a secondary school. The alternative would be to build a GCR-WCML link round Rugby completely. Never mind, that shouldn't be hugely expensive - £250m might do it.

So now we go south. This is about as easy as you can get - but maybe not as cheap as you imagine. You can't just stick the sleepers and rails back on the line - you're looking at a full rebuild and electrification. If we use the Leamside Line as a baseline for as estimate, we might be looking at £2bn to reach Aylesbury. Okay, £2.25bn. Not too bad.

And then, we hit a big big big problem. How do we get the trains into London? Running them along the surviving London-Aylesbury section is surely out of the question. The cuts to services needed to make way for even 3-4tph would be massive, making the consequences of the 51m scheme on the London Midland Euston services look like a picnic.

Fortunately, there is an alternative at hand: send the trains along the Chiltern mainline. The good news is that Rail Package 3 found that four-tracking the Chiltern Mainline is doable. The bad news is that to four-track and electrify as far Princes Risborough would cost about £6bn, mainly due to a tunnel under High Wycombe. Suddenly we're looking at a bill of £8.25bn.

And the problems don't end there. Where do you put these trains? Extremely unlikely Marylebone could take 11-car trains. Paddington might - but it needs all the platforms it has post-GWML upgrade services, even with releief from Crossrail. Might be able to extend Paddington northwards - £500m if you're lucky. Running total: £8.75bn. In addition, connectivity from Paddington is iffy, even with Crossrail on the way. If people queue to get on to the tube as Paddington, they won't use GCR.

How about the environmental damage? Very little difference between GCR and HS2, because a high-speed line has about as much land-take as a normal line. Except that HS2 tunnels under the Chilterns but GCR doesn't. The Bucks crowd will demand another tunnel, and it will be very difficult to refuse when we allowed one for HS2. £2bn in tunelling and mitigation would be a very conservative estimate. £10.75bn so far.

And what about WCML upgrades necessitated because of this? I'll disregard upgrades north of Lichfield (only relevant in a like-for-like comparison of phases 1 + 2), but it's most likely you'd still need to fourth track Rugby-Nuneaton and four-tracking on the Birmingham-Conventry corrider. Using costing from Rail Package 2, that's £1.1bn.

Grand total £11.85 billion. Nearly twice the £6bn suggested by the Mail, and that just gets you to Rugby. Suddenly it’s not such a bargain.

To be honest, there's a case for re-opening Woodhead. Connecting the Liverpool-Manchester area with the East Coast is surely a priority, especially with freight traffic increasing.

I the i this morning, news of a number of road schemes threatening national parks - including one in the pennines.

There's a case for a new route replacing Woodhead; there isn't a case for reopening Woodhead. Those power cables would cost more to reroute than digging a new tunnel. Hope Valley is not actually that bad, especially if it was redoubled throughout.

Instead of going through the Peak District, take an alignment further North, perhaps a similar alignment to the M62 (can't use the exact motorway alignment for the full distance, natch).

That would connect Liverpool/Manchester to Bradford and Leeds, instead of connecting to Sheffield, which is half the size.

If you did it together with HS2 (and to 300km/h standards) you could also connect on to Sheffield and East Midlands (HS2 won't run at capacity north of Birmingham, so this would get more use out of the Manchester tunnel and HS2-East).

It would also mean that an eventual extension to Scotland would only need one line to connect up to all parts of the network, instead of both east and west coasts.

What good is any of this for, for instance, Cornwall ? The South is not homogeneous and some of us would like to get to places quicker, too.

The biggest growth in UK railfreight is intermodal container trains. The majority use the WCML. A new £1.5bn container port has been built at London Gateway and many of the expected 44 trains a day will be heading to the soon to be built 730,000sq m of warehousing & distribution at DIRFT 3 a Daventry. The only logical route for those trains is the WCML. Reopening the GC and trying to send them that way would involve a rather spectacular (and expensive)Southward connection to the WCML at Rugby.

That's the problem with the GC scheme.The dreamers who espouse it have never looked at the reality of where we need to move passengers and freight in the 21st century.

None of this is very much good for Cornwall (Old Oak Common will make transfers to Eurostar easier). What is good for Cornwall is the electrification and signalling upgrade of the Great Western Mainline from London to Bristol, which will raise speeds and lower times for all trains using it - including London-Penzance.

The hybrid IEP trains will replace the current HSTs in Cornwall (except for the Night Riviera service), and they should also be faster on the non-improved line through Somerset, Devon and Cornwall.

An electrification-and-resignalling project on Bristol-Exeter-Plymouth-Penzance could be the next stage, perhaps sometime in the 2020s.

What good was the Stockton and Darlington Railway for Cornwall, or Manchester or London when the Stephensons built it in the 1820s? Luckily people in those days had the foresight to say "if it works there we can have one later".

Going back to the Mails headline, "Railway line shut by corrupt Tory minister who later fled the country after moving his assets to Lichtenstein just before HMRC came knocking with a bill for 30 years unpaid tax etc. etc. .............." would probably be too much to fit in!

I've said before there is a much simpler answer for HS2 Stage 1. Scrap the Chiltern Rail franchise, close the local stations and convert that line. Can anyone outside of the Chilterns see a problem? Obviously the locals won't be happy but they're the ones who don't want a new line digging through their views and we all have to make sacrifices sometimes......

To be honest, what would be best for Cornwall would be some electrification, some infrastructure tweaks and tilting trains (easy to do with the more generous loading gauge from Brunel's days).

@SteveB: You ask "Can anyone outside of the Chilterns see a problem [with closing local Chiltern line stations]?" You could just as well say the same about any main line with local services. For instance, one could argue that no-one outside Surrey and Hampshire would have a problem with shutting down local stations on the South Western main line to make way for more faster services to from Waterloo to Southampton and Portsmouth. This is fine if we decide that long-distance passenger train services are the only ones worth having. But if commuter rail is also important, then it is not acceptable to shut down successful local and commuter services just to make way for high-speed trains. Shutting down local services on the thriving Chiltern line would be a precedent for doing the same elsewhere, so would be of concern to everyone who lives and relies on a busy commuter rail corridor.