While others argue and hedge their bets over press regulation, one editor has not hesitated to stand firm and declare his forthright opposition: step forward Fraser Nelson, in charge at the Spectator, the latest issue of which – hopefully with the date corrected – bears the single word NO. Nelson is setting himself up for martyrdom. He will not submit to those rotten politicians. 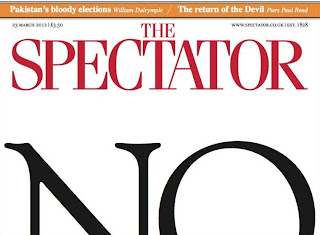 The impression thus afforded suggests Nelson and his team are people of the highest principle. But the reality is rather different: here we need to go back to the much discussed incident last September when the Mirror published those slightly blurred photos of BBC presenter Andrew Marr in a clinch with an unidentified woman outside a London watering hole. 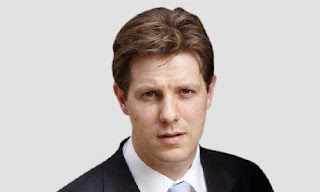 The Speccy’s Mr Steerpike was clearly keen to identify the other party, and so issued this challenge: “Do you know Marr’s mystery lady? There is a chilled bottle of Pol Roger heading your way if you do”. Well, although there is no current shortage in the Zelo Street cellar, I’m as up for a challenge as the next blogger, and so, after a short search, found the name and posted the link in the comments.

I followed this up with a Tweet alerting Mr Steerpike, who replied “little thing called ‘checking the facts’ rather than making assumptions based on one version of events”, a rather terse response, but clearly acknowledging my interest and not raising any issue in the way I had first notified it. So I waited patiently. Nothing happened. No further mention was made in the Spectator. 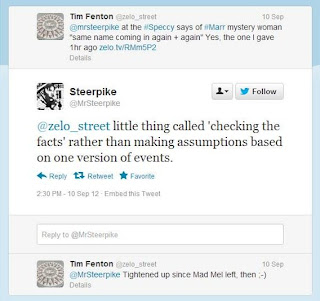 So I contacted Mr Steerpike, and asked: “Was the BBC questioned as to the identity of the ‘mystery lady’? In that case, I'm sure they would be happy to confirm this. Was the name I provided not correct? Then surely there could easily have been a quick ‘sorry, but not right this time’ response. Did someone else get there before me? If so, then why was no announcement made of their achievement?” 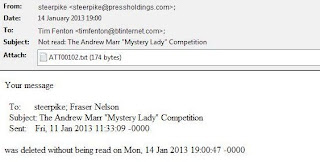 One deletion may be accidental ...

But response came there none: after sufficient time had lapsed for it to be clear the email had not bounced – in other words, it was correctly addressed – the notification arrived showing that Mr Steerpike, or his delegate, had deleted the email without bothering to read it. Was this some kind of mistake? No it wasn’t: a reminder sent recently was also deleted unread.

So that’s how high the Specator’s principles really are. Offering inducements for information while apparently not intending to honour them; then hoping everyone forgets; ignoring legitimate questions; deleting emails to pretend it never happened – yes, Fraser Nelson, those kinds of high principles.

Plus a surprise bonus double deletion!

The impression is given that Nelson is merely grandstanding, and wouldn’t know a high principle if one jumped up and kicked him in the teeth.

[UPDATE 1830 hours: after his six months of silence on the subject, Mr Steerpike has mysteriously come to life, and has Tweeted in response to this post. 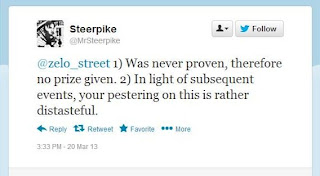 So let's take his reply one point at a time. Firstly he tells "Was never proven, therefore no prize given".

Did he not ask the BBC? If they were unable to help his enquiries, then why not say so? The information could have been appended to the blogpost, which would have laid the matter to rest. Perhaps I could ask the BBC for him, and thus fill the information vacuum? Strange that the answer has to wait until now.

His second point is "In light of subsequent events, your pestering on this is rather distasteful".

What "subsequent events" can he mean? Does he mean Marr's hospitalisation? Why should that be relevant, unless it involved the Spectator's correspondent? How is sending two emails "pestering"? Who deleted those two emails without bothering to read them? There would have been no need for a reminder to be sent - hardly "pestering" - had he responded to the first.

Someone appears to be playing the victim both directly, and by association. One has to wonder what Fraser Nelson, in whose name all this is being done, makes of it all. We shall see]
Posted by Tim Fenton at 14:53

I must admit I could see the wee teenage scribbler banged with some equanimity. he might grow up and have some glimmer of the real world outwith his privileged stratosphere.