The Express recently ran a story about Ryanair, the Millwall of air carriers (everybody hates us and we don’t care), telling that one of their aircraft had landed at Alicante airport without first getting clearance from the tower. Apart from it having happened over two years ago, the paper missed out some of the detail. And that detail (see HERE [.pdf]) shows this to have been a potentially deadly situation. 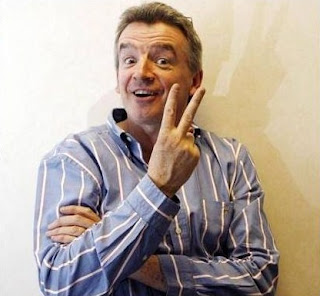 The Boeing 737-800, with a total of 174 on board, was inbound from East Midlands and had been cleared by Air Traffic Control (ATC) in Valencia to descend and approach Runway 28 at Alicante. The Pilot Flying (PF), who in this case was the co-pilot (and did not have an Airline Transport Pilot’s Licence (ATPL)), confirmed he would call Valencia again once established eight miles out.

He didn’t, and neither did Alicante tower take action until the aircraft had landed. The PF had not gone through all of his landing checklist, and so had not switched on the plane’s landing lights. This meant it would have been very difficult in the dark conditions – a January night at just before 2200 hours – to pick up the approaching aircraft from another plane on the ground. That is important.

Alicante tower instructed the marshaller to stop the aircraft short of its stand, as it had still not made contact. In the meantime, another Ryanair plane had received permission to start up and be pushed back. So a few minutes later on the approach and there could have been two of the company’s 737s having a coming together on or near the runway.

Having been stopped short of the stand, the PF called to find out what the problem was. But he called ... Valencia ATC! Only then did it dawn on the pilots that they had not contacted Alicante tower. But on making contact with the tower, they appeared to try and dodge the issue, the PF asking “We reached our stand without ... we just wait for the marshaller ... would you define the problem?”

The response was terse and immediate: “The problem is you landed without clearance”. It got worse: the Flight Data Recorder and Cockpit Voice Recorder data was not saved and was therefore not available to investigators. And this is not an isolated incident: last October, a Ryanair 737 took off from Eindhoven airport using the wrong holding point and without clearance.

And only last month a Ryanair flight landing at Dublin airport missed a runway exit and then did a 180 degree turn, heading back along and blocking the runway, forcing other aircraft to go around. The Spanish investigation did not show how many hours the pilots had done in the last 28 day period (as AAIB reports do), which would be instructive. All these incidents suggest someone is being overworked.

Yes, Ryanair’s safety record has been good for its 28 year existence. So far.
Posted by Tim Fenton at 18:01

I've always thought that when Ryanair has its first fatal crash, the firm will go bust. No one will trust it, which is what makes O'Leary's aggressive PR strategy so strange.

What about the fire on the Ryanair Dublin - Stansted flight on 27/2/2002? It landed with an engine on fire. Not their fault, but when the pilot finally understood the message he stopped the plane in a position with the fire upwind of the fuselage - exactly what caused the Manchester disaster to get out of hand. And when the Stansted Fire Controller advised them to evacuate on the left side only they lost that message as well and opened the doors on the right (into the fire).