The Express’ front page story from yesterday, which as I noted had been lifted by Mail Online, despite the subject having a past as a prominent English Defence League (EDL) supporter and therefore not one of their Kind Of People, has now also been lifted by the Super Soaraway Currant Bun. But the tale somehow does not add up, and nor does it appear to have been checked thoroughly. 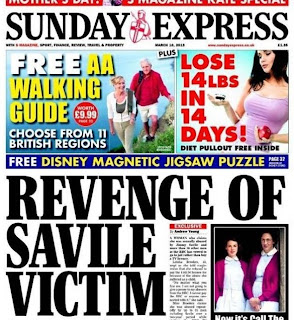 “TV Savile Victim: I Won’t Pay Beeb Fee” screams the Sun headline, oblivious to the fact that the TV Licence does not just go to the BBC. The wish to lay into the hated Beeb clearly overrides mere factual detail. And it also overrides bothering to do any research: had the Express, Mail or Sun done a quick Google, they would have found Leisha Brookes’ antipathy to the BBC was occasionally flexible.

We know this because a transcript of a “File On 4”, broadcast in September 2009, is readily available [.pdf], the subject being “Right-wing Extremists”. The 40 minute programme was initially broadcast at 2000 hours on Tuesday September 22, and repeated at 1700 hours on Sunday September 27. The reporter was Allan Urry, who interviewed a range of talking heads.

One of these, who appeared to volunteer information freely, was Leisha Brookes. “My name’s Leisha Brookes ... I myself, I’m from Essex. We want to stop the influx of Muslim extremists building mosques and trying to insert Sharia law into this country. We do not want Sharia law, we do not want this to become a Muslim country” she told Urry. The comments were typed up from the broadcast.

Moving right along from how Muslims who build mosques “insert Sharia law into this country” (difficult for those who do not control any legislature), the idea Ms Brookes did not know it was the BBC she was talking to beggars belief. But neither the Express, Mail or Sun appear to have looked this far (although, as I noted yesterday, the Mail doorstepped her over her EDL links).

Nor has the detail she gave of the BBC’s headquarters been checked for accuracy. The Express said she was abused “while ­visiting the BBC TV headquarters in White City, west London”. Mail Online said “she was left alone with men at the White City studios”. The Sun version stated “a cameraman family friend had taken her to the BBC’s White City HQ in London when she was aged nine to 11”.

Ms Brookes is 45, and so would have been between 9 and 11 years old around the 1977-79 period. Note that all three accounts state “White City” and not “Television Centre”. BBC White City was (a) not opened until 1990, and (b) not home to programmes like those fronted by Jimmy Savile. Of course, this could just be more lame reporting, and they actually meant Television Centre.

Perhaps our fearless and free press would like to bother getting its story right.
Posted by Tim Fenton at 18:25

Well spotted Tim.
You might try taking apart the Guardian article -'Jimmy Savile could have been stopped in the 60s' by going to the original source, the HMIC report published today. Just as many holes in that too!