The Centre for Policy Studies (CPS), another Astroturf lobby group that can claim Margaret Thatcher among its founders, has waded into the rail transport debate, via its “Research Fellow” Tony Lodge, who wants there to be more competition for passenger traffic because, well, that’s what it says in his book of dogma. So he has set out to prove that he is right. 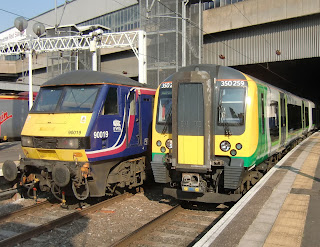 Competing operators, that Tony Lodge says do not exist, at London Euston

Lodge correctly observes that competition has worked in the rail freight sector, but then, this was also the case in the USA. What he has not learnt from the States is that applying the same idea to passenger travel, in almost all cases outside the Northeast Corridor, meant ending up with no rail services at all. Amtrak did not come into being purely to satisfy political whim.

Yet Lodge looks at the East Coast Main Line (ECML) out of London’s King’s Cross terminus, sees that “open access” operators are present in the mix, and concludes that this is A Very Good Thing. That Hull Trains (HT) and Grand Central (GC) between them muster less than a fifth of East Coast’s (EC) service level is ignored, as he asserts that this should also happen on the West Coast Main Line (WCML).

He wants choice because it is claimed this means the availability of lower fares, but ignores the reality of the situation. HT started their operation with trains hired at “mates’ rates” from Anglia. Having established themselves, they replaced these twice, and now run 125mph trains made surplus elsewhere on the network. GC use similar trains, as well as surplus InterCity 125 (IC125) sets.

You can’t just turn up on the WCML with similar 125mph sets, of which there are none spare in any case. The nature of the line means having trains that conform to Enhanced Permissible Speed (EPS) rules, which in plain English means having tilt capability. There aren’t any outside those run by Virgin Trains (VT). And on top of that, there are no available paths on the WCML.

In any case, the WCML has cheaper alternatives to VT: London Midland (LM) offers a slower but less expensive service, and London to Birmingham can also be covered by Chiltern Railways (CR). There is already choice and competition: in fact, far more trains are offered by LM and CR than the ECML open access offering combined. And Lodge ignored the needs of that freight sector he just championed.

Parts of the ECML are now barred to some freight trains, such is the lack of capacity. As Tony Berkeley of the Rail Freight Group has pointed out, demand for freight paths on the WCML is already way ahead of supply, and the situation will only get worse until HS2 comes on stream. There’s no room for ideological tinkering with passenger traffic to satisfy the Astroturfers’ dogma.

The CPS’ “Research Fellow” would be well served actually doing some research.
Posted by Tim Fenton at 14:12