Hislop Does Not Say No

As the fallout from the cross-party press regulation agreement continues, that part of the Fourth Estate opposed to the thought that they would no longer be allowed to mark their own homework is clinging to any sign that those rotten politicians can be made to run along and leave them in peace. Apart from the refusal of Spectator editor Fraser Nelson to take part, there have been other diversions. 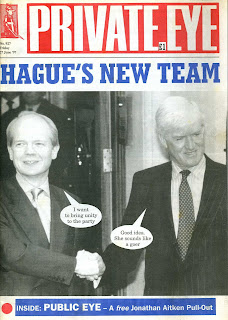 The Maily Telegraph’s Benedict Brogan confidently asserted that the Murdoch, Rothermere and Barclay Brothers empires would merely set up their own new regulator, with or without the company of Richard “Dirty” Desmond. But then, as a former Dacre hack, he is well versed in the tactics of spin and threats. Brogan will be believable when that happens – so not for the foreseeable future.

The other thrust of the argument against what was agreed early on Monday morning is that even the Independent and Guardian have reservations, especially over the idea of exemplary damages for those remaining outside the system. But these are mere details: in the main, both papers’ editors don’t have a problem with the concept. So the “yeah but” brigade has moved on to Ian Hislop.

Private Eye was not governed by the PCC, and in a much quoted (and misinterpreted) BBC interview yesterday, Hislop told that he was never going to be inclined to have anything to do with an organisation run by the very papers that the Eye devoted one of its longest running features (Street Of Shame) to exposing and ridiculing. Mail editor Paul Dacre has been a regular target.

What Hislop did not say in that interview was that he would not be joining the new system when it finally gets set up. Strangely, it is the Guardian which has set this hare running, but Hislop’s words bear further examination: “Everything about it makes me think: 'I didn't belong to the previous regulator, I don't want to belong to this one'”. He is not saying "no". 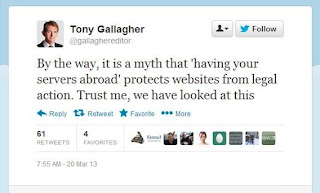 Neither is Maily Telegraph editor Tony Gallagher – who would be able to retain his Twitter handle unaltered if he went to another paper, Mail succession watchers please note – although he is warning that the “having your servers abroad” excuse is no protection against legal action. So forget the spin from the perpetually thirsty Paul Staines in the Sun about sending a warship to California.

So what we’ve got is one magazine editor playing the martyr (not a good sales driver if another libel action like the one that Mad Mel brought on the Speccy comes along), but, despite the howls of protest, nobody else saying unequivocally that they will not join the new system. Not even the editor of Private Eye.

[UPDATE1 21 March 1150 hours: today the New Statesman has supposedly said no, but, like Ian Hislop, it hasn't really. The magazine "does not see its interests served by regulation designed to suit politicians".

After grumbling at the presence of Hacked Off representatives during the talks on Sunday night, and a trip around the defamation bill, there is talk of "cosy deal-making in Downing Street" (Mil The Younger's office is not in Downing Street, Staggers people), and the conclusion that what has been proposed is "ill-judged, unworkable and, ultimately, wrong".

So where is the bold and unequivocal decision? Here is the best they can do: "Until a better plan is put forward we reserve our right to continue publishing 'news-related material' in print and online without deference to either of those parties" [regulator as envisaged by the Sunday night agreement, or an alternative construct from the Mail, Telegraph and Murdoch press].

That means they have not said no, but like Private Eye's editor, are leaving themselves wriggle room. Nice try, though]

[UPDATE2 21 March 1330 hours: Helen Lewis of the Staggers has pointed out that the reference to Downing Street referred to the earlier talks Young Dave had with press representatives, mainly from the Murdoch, Rothermere and Barclay Brothers titles.

However, and there is inevitably a however here, she has not taken issue with my main conclusion, that her publication has not actually said no. Which leaves the Spectator in splendid isolation]
Posted by Tim Fenton at 10:46