The perpetually thirsty Paul Staines and his rabble at the Guido Fawkes blog are always keen to pick up on howlers in local Government publications – especially those councils in London under Labour control. Today they have been rather a little too keen, so keen in fact that they have been suckered into running a story that had already been called out as a fraud. 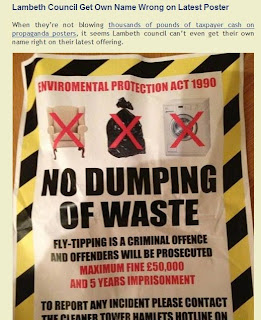 It looked so tempting ...

A notice apparently issued under the “Enviromental [sic] Protection Act 1990” has been splashed over the Fawkes blog today. It purports to have come from Lambeth Council, and they, as any fule kno, are held to be part of the “Loony Left”. So the Fawkes folks were on it like a shot. But the poster is strewn with errors, and these should have sounded the alarm. 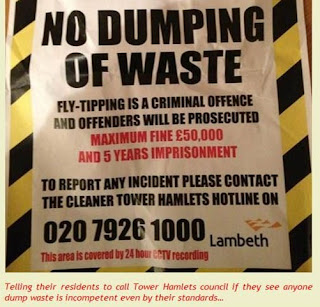 ... but the incompetence was all Fawkes'

They didn’t: Staines and Co were more keen on putting one over on the hated lefties. So the instruction “To report any incident please contact the Cleaner Tower Hamlets hotline on 020 7926 1000” did not warrant a call to Lambeth to ask why they should be pointing their Council Tax payers to another borough. Nor did the fact that the number is not for Tower Hamlets.

The phone number is for the main switchboard at Lambeth council, but if anyone was reporting fly-tipping – the subject of the poster – the correct number to call would be 020 7926 9000. We know this because the official Lambeth Council Twitter feed pointed it out in response to an earlier sighting of the poster. And they did the pointing out on March 7. 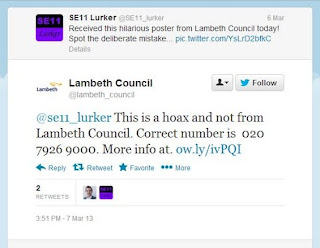 The reality - from eight days ago

That’s right, the fly-tipping poster mixing up Lambeth and Tower Hamlets, and which had difficulty spelling “environment”, had been called out more than a week ago. But the clowns at the Guido Fawkes blog couldn’t be arsed checking before laying into the rotten lefties with both feet – and thereby scoring another clumsy own goal. Let the spin and excuses begin.

How’s that 4% trust rating working out for you Fawkes people? Another fine mess, once again.

[UPDATE 16 March 0955 hours: this morning, the post had been quietly taken down, without further comment from the Fawkes rabble. So no acknowledgement of their mistake, nor apology for hoaxing their readers. But the Twitter traffic is still there, so you can see the full extent of Staines' ineptitude (and that of his newly appointed teaboy Alex Wickham). 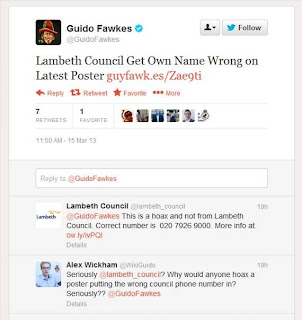 Staines had initially advertised the post at 1150 hours. Lambeth Council replied, to advise the poster was a hoax, at 1414 hours, and Wickham then argued the toss instead of bothering to do his homework - or even consider pulling the post and admitting the Fawkes folks got it wrong.

Wickham's reply is timed 1418 hours. This post did not go live for some hours after that, and the Fawkes blog post was still there - otherwise, it would not have been possible to take screenshots of it. Now, at last, they have pulled it but haven't got the spine to admit they fouled up. Another fine mess, once again]
Posted by Tim Fenton at 18:50

" But the Twitter traffic is still there, so you can see the full extent of Staines' ineptitude (and that of his newly appointed teaboy Alex Wickham)."

Aha! The influence of tannic acid and caffeine on top of all that alcohol intake? Another scare story for the NHS to exploit?

I am more interested to know, if it is a fraud, whodunnit & why?

Lambeth denying it without evidence (*) isn't actually proof that they didn't do it. It may have been some low level staffer. (*) I appreciate it would be difficult for them to ask every staff member.