Many who do not do Westminster watching may not have heard of Fiona Mactaggart. The Labour MP for Slough has been given stick from the punditerati for being humourless (OK that was from Benedict “famous last words” Brogan, so potentially unreliable), but she entered into the spirit of Red Nose Day yesterday in a spirit of unquestionable generosity. 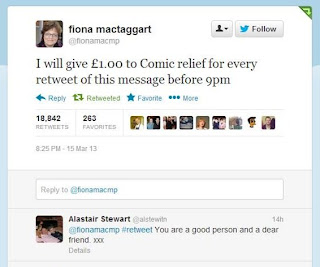 At 2025 hours, she declared on Twitter “I will give £1.00 to Comic Relief for every retweet of this message before 9pm” (she also gets stick for being comfortably off, something the Maily Telegraph conspicuously does not do to Tory MPs, which is, of course, a mere coincidence). And so the minutes ticked away, before she called a halt and broadcast the total. 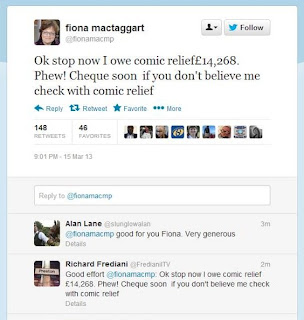 “OK stop now I owe Comic Relief £14,268. Phew! Cheque soon if you don’t believe me check with Comic Relief” she told the Twitterati.

Yes, there were expressions of “you could afford it anyway”, and similar snarks, but this was a genuinely generous act, and got folks into the spirit of giving.

So much so that I’ll be extracting the debit card and making my own donation as soon as this post is finished. Why not?
Posted by Tim Fenton at 11:21