It is rare for the perpetually thirsty Paul Staines and his rabble at the Guido Fawkes blog to make common cause with the folks at the deeply subversive Guardian, but this morning has seen one of those rare occasions as both have reported on a Greenpeace publicity stunt taking place in the constituency of the Rt Hon Gideon George Oliver Osborne, heir to the seventeenth Baronet. 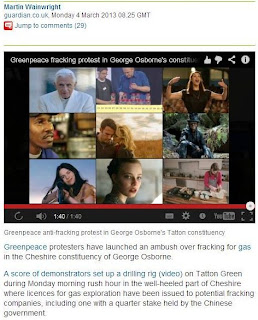 Tatton Green? Where that?

Osborne’s Tatton constituency has been targeted by firms keen to prospect for shale gas. So Greenpeace has set up a fictional firm called “Frack & Go”, and videos have been recorded and published in pursuit of their campaign. But, sadly, neither The Great Guido nor the Guardian (the latter no longer with the local knowledge that being based in Manchester would have brought) know the area.

So both have demonstrated their ignorance in spades. The Fawkes folks tell that “Across the street from George Osborne’s constituency office is a village green”. Baloney. It’s not situated in a village (OK, Greenpeace misled them, but single sources and all that, chaps), and so it ain’t a village green. The clue is the roundabout and all that traffic. 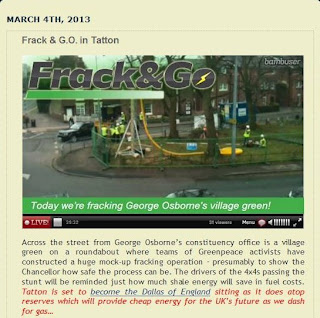 The Guardian is doing no better: “A score of demonstrators set up a drilling rig on Tatton Green during Monday morning rush hour in the well heeled part of Cheshire”. Well, it’s an upmarket area, but there is no such village as Tatton. Similarly, there is no such settlement as Eddisbury or Weaver Vale, these being two adjacent Parliamentary constituencies.

So where is the stunt taking place? Well, it’s taking place in a well-known town (not a village) with a population of over 13,000, this being Knutsford, named because of its connection with the legendary King of not-holding-back-the-tide fame. The town gets busy because lots of employers have offices in and around the place, and its boutique shops are very popular with the Cheshire Set.

And the confrontation between the Hamiltons and Martin Bell, mentioned in the Guardian piece, didn’t take place on that patch of grass, but on the rather larger green space of Knutsford Heath (see road to right of shot in Greenpeace video, follow that and it’s on the right). It’s a pity that neither the paper, nor the Fawkes rabble, can be arsed getting a map out and looking at it.

After all, they wouldn’t make that kind of mistake in London, would they? Heck, even the Huffington Post UK, much derided by the Fawkes mob, got the place name right. Another fine mess.

[UPDATE 1200 hours: the Guardian has now had another go, getting the town name - Knutsford - into its copy, but claims this area is the Heath. Not strictly speaking, it isn't: that's a much larger area out of the shot in the Greenpeace video (to the left and across the main road in the screengrab below). 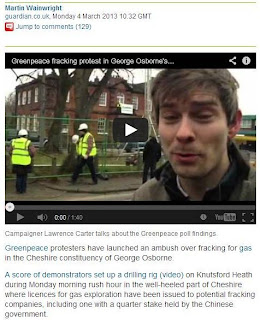 But at least they have made an effort. No prizes for guessing that the Fawkes rabble have taken their usual line of ignoring everyone and hoping they don't notice. Another fine mess, once again]
Posted by Tim Fenton at 10:12