London’s occasional Mayor Alexander Boris de Pfeffel Johnson is in his element when being given a softball one-on-one on TV, at a well controlled photo opportunity, or reeling off a string of propagandist whoppers in his Maily Telegraph column (each one of which garners £5,000 of “chicken feed”). Last night’s Peoples Question Time event in Catford fell into none of these categories. 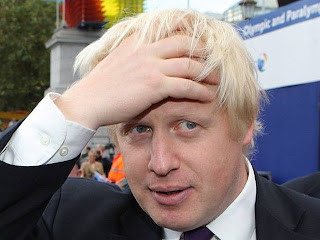 But Bozza had no alternative: these events are part of the Mayoral duties. So along he toddled to a place that does not benefit from his vanity cycle scheme, his vanity buses, or his vanity cable car. But it is close to the perilously placed Lewisham Hospital (which may be downgraded very soon), and will feel the effects of imminent Police and Fire service reductions.

There was an attempt by the bouncers to prevent live Tweeting before Bozza appeared. This was unsuccessful, as was The Great Man’s attempt to make light of the less than rapturous mood: “I can tell from the enthusiastic reception that we are going to have a lively debate”. So, to try and curry some favour, he told of all the wonderful things he had done for the capital.

Sadly, this too failed to impress, given that much of his achievement was actually down to Ken Livingstone – including the Olympics and Parapympics – and in any case none of it benefited Catford or Lewisham. And talking of Lewisham, questioning swiftly moved to the subject of That Hospital. Would he back the campaign to save the A&E service? Did he appreciate how long it took to reach other hospitals? 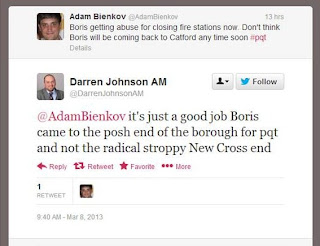 But look on the bright side, it could have been worse

Bozza channelled Jeremy Hunt – not a good move – in claiming that folks having to go to an A&E further away would “save 100 lives”. This, too, failed to impress. Maybe the punters have seen through the Government and their press cheerleaders bandying about life and death numbers to prop up their increasingly shaky policies. In any case, Bozza’s 2008 manifesto did not match his current stance.

They weren’t finished. Why wasn’t the Bakerloo Line extension being given priority? Why had he cancelled Tramlink to Crystal Palace? What use was the cable car? What effect were Police cuts going to have on crime? And then it was over, as many of the audience didn’t wait for the closing remarks before deciding they’d heard more than enough blond waffle for one evening.

And even the Standard has reported his discomfort before the voters.
Posted by Tim Fenton at 10:03