Young Dave was unequivocal: despite the Tories coming third in Eastleigh, there would be no “lurch to the right”. Sadly for him, his own ministers are now clearly manoeuvring somewhere behind him to suggest that lurching to the right is exactly what is being offered to the electorate, with the resultant breakdown in party discipline splashed all over the Mail On Sunday. 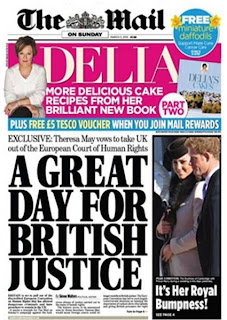 And, despite former Standard man Geordie Greig being nominally in charge at the MoS, today’s lead story, “A Great Day For British Justice”, under the by-line of serially dishonest political editor Simon Walters, is straight out of the playbook of the legendarily foul mouthed Paul Dacre, Greig’s managing editor. And so is the editorial backing up the article.

Put directly, the MoS is claiming that the UK will withdraw from the European Convention on Human Rights (ECHR). The claim is also made that this will be down to Home Secretary Theresa May, and not Cameron. So it is her team that is leaking the story to the MoS, and moreover, it’s a story that has absolutely zero basis in fact. But she will not get the sack, or even a reprimand.

The UK will not be ditching the ECHR – which it signed up to in 1950 – any time soon, if at all. And far from being “discredited”, as Walters pretends, the ECHR, along with the Human Rights Act, guarantees basic freedoms to all citizens – even Mail journalists – which we would be most foolish to give away. Perhaps Ms May, and her new pal Dacre, would like to tell readers what they would scrap.

The inconvenient fact is that no reasonable person would vote for a party that took away any of those human rights. After all, the withdrawal of our fundamental freedom is the behaviour of tyrants and dictators. And that leads to a very dark place indeed.

But thanks for telling us how desperate the Tories are right now.
Posted by Tim Fenton at 10:47

It's almost as if there was an organised campaign. Here's Nick "Nice but Thick" Herbert's latest wittering on the matter: http://www.nickherbert.com/media_centre.php/577/whats-gone-wrong-with-rights

Essentially, if you believe the lies the Mail has made about ECHR, Yuman Rights etc, then it follows that something needs to be done about it. That something is not, of course, a search for the truth but rather a bonkers proposal to remove rights that assumes its only the right kind of people who will suffer.

I'm no fan of the Mail's take on the ECHR, but it's not correct to claim that withdrawing from the ECHR would mean the abolition of these rights. Nobody is arguing against the right to life, right not to be tortured, or anything else in the list. The issue is over who interprets the rules. Some articles in the convention are very specific over what is and isn't allowed (e.g. the right to a fair trial), and that works quite well. Other articles are vague (e.g. the right to a family life), and this is where we're getting problems. Because when rules are this vague and have so little oversight from a legislature, this gives far too much power to unelected judges and lawyers.

I think David Cameron hit the nail on the head when he said that the ECHR is turning into a small claims court. But the only people seriously advocating outright withdrawal as a solution are the Mail et al. There's a good chance of getting the Convention overhauled - 73 years is a quite reasonable time to have a another look and see how well the rules are working. Failing that, there are ways of tightening up UK laws to be more resilient to the odd silly decision. For the Mail's idea, the words "sledgehammer" and "walnut" spring to mind.

63 years, Chris. And your last sentence is spot on.