Newspapers lack specialist knowledge nowadays, to the extent that whoever is called upon to discuss rail (or air) travel is more than likely to be the same hack who road tests the latest cars. So historical knowledge is somewhere between patchy and zero, and so it has proved as the Dacre doggies have tacked the fiftieth anniversary of the Beeching Report. 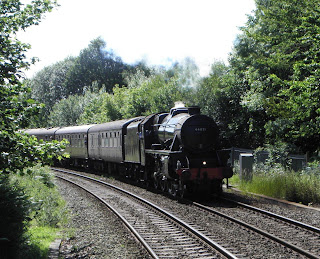 “The day we said goodbye to King's Nympton, Lady's Bridge and Midsomer Norton : How Beeching's Axe fell on the beautiful small stations of old England 50 years ago” proclaim Emily Davies and Steve Nolan. King’s Nympton is still open, so the axe did not fall on it, and neither did it fall on Aldermaston, which merits two photos and even the name of a porter who worked there.

Readers are treated to two photos featuring “The last train to depart from Nottingham on the Great Central route to [London] Marylebone” in 1966, although the run-down of this route was confirmed more than three years before Beeching’s report, when daytime express services between London and Sheffield were taken off in January 1960. The closure had been planned years before that.

Then we get “The Southbound Pine[s] Express from Bath Green Park ... was one of the services to be cut under Beeching’s Axe”. Rubbish. The Pines Express was not cut, but re-routed away from the Somerset and Dorset line – Bath Green Park, now a supermarket, was its northern terminus – after the 1962 summer season. So that’s the year before Beeching’s report.

It gets worse: the list of towns said to have had their stations closed includes Yeovil, which has two stations (Yeovil Junction and Yeovil Pen Mill) that are very much open. Also listed is Dudley in the West Midlands, which has a station at Dudley Port. The re-openings list also manages to miss both Hednesford in Staffordshire, and the Scottish town of Alloa.

The Mail’s former industrial Editor Keith McDowall, who knew Beeching, fares little better. He tells “Two-thirds of the rolling stock was not used all the year round. One extreme example of this under-use highlighted by Beeching was in Norfolk, where the line between Thetford and Swaffham carried an average of only nine passengers on five trains a day”. That’s an example of the one-third, Keith.

He claims “Beeching created new freightliner rolling stock”, which he did not, although he did advocate trainload freight. Then it’s “the National Union of Railwaymen undermined the effectiveness of the new freightliners by insisting ... that there must be a guard at the rear of every train”. Sat on the end flat wagon, did they? You mean in the rear cab of the train locomotive.

“I organised his farewell lunch” he recalls. The Mail needs its copy organising, too.
Posted by Tim Fenton at 16:04

There was a Yeovil Town station. It closed in 1966 and was a freight yard for a few years before finally shutting. It's now a cinema complex and car park.

The station starred in the Terry Thomas comedy "School for Scoundrals" as the dropping of point for the College of Lifemanship.

The bridge that went over the line is still in use on the road to Yeovil Junction, just on the edge of town.

"Sat on the end flat wagon, did they? You mean in the rear cab of the train locomotive."

Well, that is not far from the truth in that freight trains used to have guard vans at the back of each train probably on the basis that a pair of eyes helped at that end of the train just as London Underground used guards in the last carriage and main line passenger trains today still have "guards" or train managers but with additional duties.

The comment was because Freightliner trains do not have brake vans.

So guards had to sit in the rear cab of the loco. Of course, over time they have disappeared, as has the second man in the cab that Beeching also didn't do away with.

According to this article the early Freightliners could have had Guards vans at the rear of the train (or the locomotive) in the late 60s ("albeit not suitable for the speeds of the freightliner system") but in 1970 agreement was reached with the Unions to move them to the rear cab as you state.